Accessibility links
The Hatchet And The Scalpel: A Debate Parable John McCain and Barack Obama clashed Wednesday night at a debate over kitchen table issues. McCain displayed his ability and eagerness to strike, while Obama drew blood with pinprick precision. And he may have scored points by not going in for the kill.

The Hatchet And The Scalpel: A Debate Parable

The Hatchet And The Scalpel: A Debate Parable 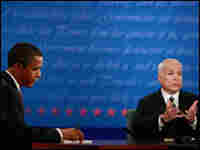 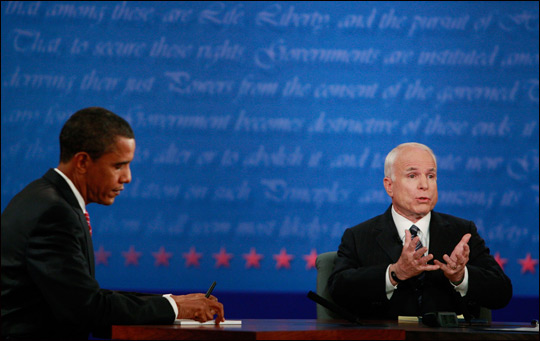 Watching Washington: Why McCain Debated As He Did

The Hatchet lives on a ranch out West. And he's making a lot of noise as he angrily chops his way around the country, seeking to make his way back to Washington, declaring the need to put country first, and asking, "Who is the Scalpel?"

The Scalpel, as it happens, comes from the big city. He's younger, calmer, leaner, and surprisingly, given the huge crowds at his earlier rallies, he's also stealthier. Fewer misdirected chops translates into fewer bad headlines. The Scalpel is quietly slicing his way directly toward the White House. But will he get there?

The Hatchet and the Scalpel clashed Wednesday night at a debate over kitchen table issues. The Hatchet displayed his ability and eagerness to strike, while the Scalpel proved able to hold back. When he drew blood, it was from pinprick incisions. And even when on the attack, the Scalpel didn't come off as aggressive. And he may have scored points by not going in for the kill.

OK, I made up the parable. Well, made up is a stretch. It was inspired by Republican presidential nominee John McCain during Wednesday night's debate at Hofstra University. He sought to explain how he would reconcile his budget proposals with the huge new federal spending triggered by the current economic crisis.

"What would I cut?" McCain asked. "I would have, first of all, an across-the-board spending freeze. Some people say that's a hatchet. That's a hatchet, and then I would get out the scalpel."

"It sounds good," Democrat Barack Obama replied. "In fact, an across-the-board spending freeze is a hatchet, and we do need the scalpel, because there are some programs that don't work at all. Some programs are underfunded. And I want to make sure we are focused on the programs that work."

McCain went repeatedly on the attack Wednesday night — finally confronting Obama, to his face, on his ties to 1960s radical William Ayers and the community activist group ACORN, which has been accused of fraudulently registering nonexistent voters. Obama seemingly welcomed the attack and calmly rebutted the Ayers connection. (He didn't really address the ACORN claim, though he did earlier this week.) Obama consistently turned his responses to the idea that there were far bigger issues at play for most Americans, like the failing economy and their job security.

McCain landed his best blow when striking back against Obama's efforts to summon up his most embarrassing connection — to the Republican currently in the White House. "Sen. Obama, I am not President Bush," McCain said. "If you wanted to run against President Bush, you should have run four years ago."

Done right, it might have had a chance to throw off the seemingly imperturbable Obama. But McCain's body language was off-key, more Hatchet than president. On CBS, on which I watched Wednesday's debate (I try to pick a different network each time), both candidates were shown almost constantly in a split screen. Obama watched his opponent speak attentively, whether smiling or nodding with furrowed brow, as McCain criticized him. McCain, by contrast, often looked indignant. Sometimes he sighed or made a tense smile or waggled his eyebrows as he glanced at moderator Bob Schieffer of CBS News. I half imagined McCain was hoping the political anchor would weigh in and say, "Gosh, Sen. McCain, you really got him on that one."

I heard several analysts say this was McCain's best performance. I didn't think so — I thought he was tightly wound Wednesday night and came off better during the first debate a few weeks ago, better stylistically than Obama.

Speaking of Schieffer, this final debate was by far the best-arranged of the bunch. The questions were serious and framed around specific and current issues. He improvised and followed up when both candidates avoided direct answers. Neither senator took much advantage of the format to ask each other questions; instead, both delivered attack lines or set pieces to viewers at home. Some had speculated the seating arrangements would force civility, as the two candidates and the moderator sat in proximity across the curve of a table. Not so. But both candidates finally addressed abortion, teased out differences on health care policies, and dealt directly with issues that had been bubbling under the surface.

So now to Joe the Plumber, who undoubtedly was under serious consideration to get his own CBS sitcom in the slot after Two and a Half Men and The King of Queens. Joe Wurzelbacher had approached Obama on the campaign trail in Ohio and said that the Democrat's plans to raise taxes on those making more than $250,000 a year would prevent him from buying a plumbing firm.

McCain invoked "Joe" again and again, to the point where Joe the Plumber appears to have replaced both independent Sen. Joseph Lieberman of Connecticut and Joe Six-Pack as the McCain-Palin ticket's favorite Joe. Of course, later in the evening, on the CBS Webcast, Wurzelbacher explained that Obama "tap-dances around questions almost as good as Sammy Davis Jr."

Say it ain't so, Joe. But I'm sure Joe meant to add that Obama was as cool as a Dean Martin Cosmopolitan, as silky as a Frank Sinatra treatment of a Cole Porter standard, and yet surprisingly, that the Democrat's words were as forgettable as dialogue spoken by Peter Lawford.

Speaking of Joes, McCain said Obama's running mate, Joe Biden, was qualified to be president but had some "cockamamie" ideas on foreign policy and Iraq. Obama said the voters would judge Republican VP candidate Sarah Palin, but didn't attack her at all. Instead, Obama said funding for special needs children (one of Palin's causes) would suffer in an across-the-board budget cut.

The scalpel versus the hatchet.

Over on Fox News, the syndicated conservative columnist Charles Krauthammer said the debate was a wash — which he said was a boon for Obama.

"Obama is preternaturally calm, cool, unruffled and reassuring — and that's really all he needed to be," Krauthammer told Fox's Brit Hume. "McCain was trying to win on points — because that's what you do if you're behind. But McCain has this curious way of simply jabbing: He jabs, then he kind of walks away after it's parried, and he never delivers the real blow. And that's because he has this way of speaking almost telegraphically."

The instant polls — for what they're worth — depict a brutal night for McCain. CNN's survey found that voters who watched considered Obama a better leader, a more positive campaigner and the winner of the debate. On CBS the spread was even greater. "It's a huge spread," said CBS News senior analyst Jeff Greenfield. "I find these numbers striking, because it suggests to me the country is coming to a decision, so maybe they're seeing the debate through that prism."

I've never trusted such polls much. Some analysts expressed similar skepticism Wednesday night, including partisans like former Bush adviser Dan Bartlett and nonpartisans like CNN senior correspondent John King. But colleagues tell me they have generally held up this year, so take that into account, too. They've got to be better than the utterly unscientific "text-in" voter surveys, in which Fox News and MSNBC invited viewers to weigh in by mobile phone texting. On conservative-friendly Fox, viewers said McCain won 87 percent to 12 percent. On liberal-friendly MSNBC, viewers who bothered to text in found Obama helped himself more than McCain by 90 to 10. Both outcomes were outright junk.

More interesting was the analysis of real polls. As CNN's King (John, not Larry) showed on his extraordinary touch-screen electoral map, if McCain were to win every single state that CNN analysts currently put in the "tossup category," Obama would still win the White House by seven votes in the Electoral College.

And that emerging clarity about what may be ahead presents a problem for those journalists and analysts who, like Greenfield, sense a verdict but may be pulling their punches. Undoubtedly, they do not want to short-circuit the political process by creating a self-fulfilling prophecy or by driving a backlash. And even more undoubtedly, given the bedlam of the past two Election Days, they do not want to get it wrong.