Accessibility links
Dissonance Is The New Harmony Jangling collages of sound, atonal melodies and jumbled percussion, avant-garde music has gone through a lot of bizarre phases. And now "noise music" is picking up young fans through easy digital access. In the birthplace of R.E.M., members of the underground scene push the boundaries of sound.

Listen
Dissonance Is The New Harmony

'Courage' from Better People's Salvia Inside the Broken Home EP

'Death and Grieving' from Better People's contribution to Deeded to Itself: Athens Southernoise 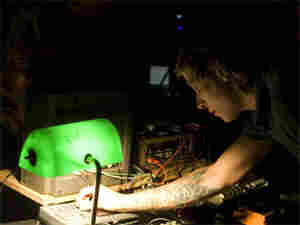 Jangling collages of sound, atonal melodies and jumbled percussion, avant-garde music has gone through a lot of bizarre phases. And now, "noise music" has become accepted in indie-rock circles through easy digital access.

In the birthplace of R.E.M., dissonance is the new harmony. Members of the underground scene of Athens, Ga., push the boundaries of sound.

"I dare you to enjoy it," Patterson says, "because it's anti-music and qualifies as unlistenable."

It might be unlistenable, but it's got a huge following, and 21-year-old Tyler Rosebush is a fan.

"Since it's so on the spot — it's not re-rehearsed it's not prerecorded — the final product reflects the entire process, and you're intimately acquainted with every step of the way this music is created," Rosebush says. "With digital music and iPods and stuff like that, it's easy to get caught up and just lost in this sea of stuff that is the end and not the means."

This isn't about being weird; it's about going into another state of mind. Pop music doesn't exactly make you think when the lines include, "Get you drunk off my humps, my lovely little lumps."

"That's what my music is," Patterson says. "It's a rejection of pop, a rejection of rock 'n' roll, because it's harsh and abrasive and it's not a pretty thing. It's coming from a pretty angry place."

Noise performers challenge the notion of what music is and who qualifies as a musician. Rob Peterson is a graduate student in art at the University of Georgia. He experiments in sound sculpture and performs at live shows.

"A lot of these shows, there's no stage. It's just the floor of a house," Peterson says. "A lot of times, you can't see the artist because they are on the floor — all you can do is hear because people are hovering. There is no barrier between the audience and the performer. So it is this kind of mutual self-expression."

Better People's Doug Patterson encourages people to give noise a chance for an in-depth experience.

"There's an intention behind it, and I'm trying to tell you something," Patterson says. "If you take the time to get into it, the rewards will be so much more than listening to something that's already been laid out for you."

Noise fans want to be challenged, and that's the main difference between pop music and noise music. Without comfortable lyrics or a predictable groove, the mind works a little harder.

To hear more from Youth Radio's What's the New What series, click here.