Accessibility links
How Chicago Politics Shaped Obama Chicago residents who knew Barack Obama long before he became a political star say he has always had a warrior instinct. And as a student of the city's politics, he picked up key lessons during his time there, like the importance of building multiethnic coalitions.

Barack Obama speaks at an AFL-CIO convention on Sept. 1, 2004, in Rosemont, Ill., during his campaign for the U.S. Senate. He ran against former presidential candidate Alan Keyes. Tim Boyle/Getty Images hide caption 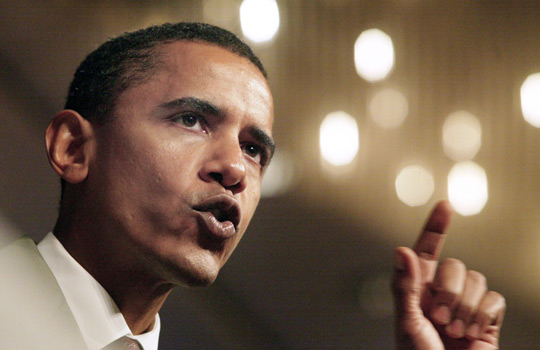 Barack Obama speaks at an AFL-CIO convention on Sept. 1, 2004, in Rosemont, Ill., during his campaign for the U.S. Senate. He ran against former presidential candidate Alan Keyes. 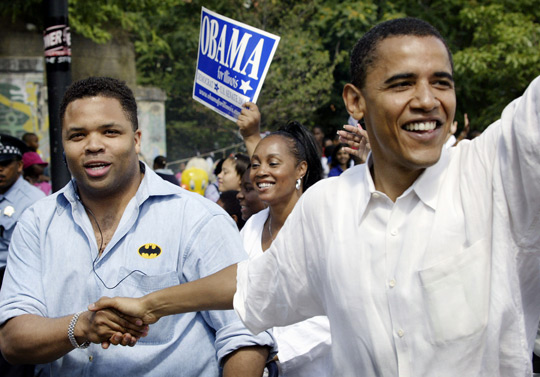 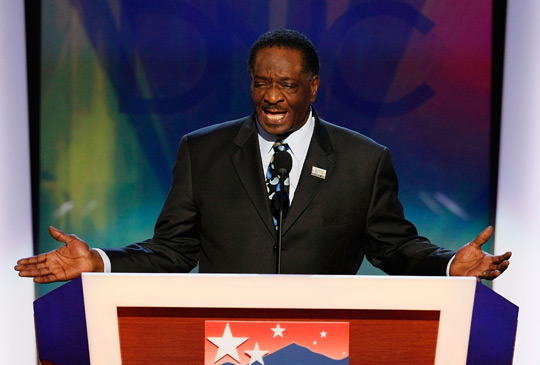 When Democrat Barack Obama began his run for the White House, he faced constant questions about his fortitude and his lack of experience in national politics: Is he tough enough? When attacked, will he cower or will he fight back?

So common were these questions that a popular New York Times columnist took to calling him "O-Bambi."

It's now widely believed that Obama toughened up in the course of a long nomination battle. But people in Chicago who knew Obama long before he became a political star say he has always had that warrior instinct.

"I don't think he was naive by any means, and I think people are beginning to discover that there is nothing naive about him," says Delmarie Cobb, a longtime Chicago political operative.

Chicago, known as the "City of the Big Shoulders," is famous for its pugilistic politics.

"We always say there is a little bit of gangster in everybody who's from Chicago," Cobb says, adding it's a point of tremendous pride.

So how did Obama's time in Chicago shape him as a politician?

The story of Obama's first election could be called: "The Political Execution of Alice Palmer."

Palmer was a friend and early mentor to Obama when he was working as a grassroots organizer after law school. She was a longtime and popular state senator on Chicago's South Side.

Then in 1996, Palmer decided to make a run for Congress.

Obama was the chosen successor for her seat in the state Senate, says Alan Dobry, a longtime political activist who lived in Palmer's district. Dobry says Palmer called Obama a "fine young man" when she talked about who would replace her.

But Palmer lost in the primary for that congressional seat and decided that she wanted her old Senate seat after all. Her protege Obama would have to step aside.

It was a test, a Darwinian dilemma. In order to fulfill his own ambitions, Obama would have to kill his friend's political career.

Obama stood his ground and went one step further. Using an aggressive procedural move, he challenged the signatures on Palmer's nominating petitions. And he even went beyond that: He challenged the petitions for all three of the opponents.

It's not unusual for politicians to muscle rivals off the ballot, especially in Chicago, says longtime Chicago Alderman Toni Preckwinkle.

"My view is that you're not ready for prime time if you can't get your petitions in order and file them according to the requirements of the law," Preckwinkle says. "If you fail to do that, then it's your problem."

And there was a problem. It turned out all the opponents had faulty signatures.

Back in that '96 race, Dobry was one of the people trying to verify signatures for Obama's campaign — and they found that Palmer's petitions were circulated by people named "Pookie."

"We know what that means," Dobry says. "It means somebody got a bunch of kids from the local high school to circulate the petition, and they put down the name as Pookie."

The maneuver worked. Obama knocked all of his opponents off the ballot. He cleared the field and sailed on to an easy victory in the heavily Democratic district.

Obama arrived in Chicago as an outsider, a guy who was raised in Hawaii.

The move against Palmer proved to Democratic Party insiders that just maybe he had what it took to survive in Chicago, says Laura Washington, a columnist for the Chicago Sun-Times, who has covered politics for almost three decades. She says Chicago is a tough political town, where "folks fight to get ahead."

"If he wanted to win and be received as a tough cookie, he had to do what it took," Washington says. "I think that election is what made his peers sit up and take notice."

Washington adds that Obama was a "nobody" until he beat Palmer.

"His peers, I think, secretly admired his ability to do that, even though some of them were supporters of Alice Palmer's," she says.

Although Obama had earned his party's respect, he faced significant challenges. He still had to penetrate a political machine that usually required a hometown pedigree. He had no family connection, no neighborhood network. But he did know a lot about grassroots organizing. And as a student of Chicago politics, he picked up a key lesson: Politicians are as powerful as their patrons.

One person who knows this well is Jerry Kellman, who hired Obama to come to Chicago and work as a community organizer. Over the years, Kellman watched Obama build his network.

"Barack is wonderful at finding mentors — but not emotional mentors, or mentors to advance his career, but mentors he can learn from," Kellman says. "He's just hungry, and he'll attach himself to all kinds of people — not just people of status, but anybody who can teach him something."

Kellman and others say Obama doesn't wait for people to take him under their wing. He's much more assertive, tracking down powerful fundraisers and people who could help him maneuver for key committee assignments in the state Senate.

"My first impression of Barack was he was very intelligent, but rather pushy at the time," says Emil Jones, president of the Illinois Senate and one of the most powerful figures in Illinois politics.

After winning his Senate seat, Obama quickly pushed his way into Jones' good graces. And when Obama was contemplating a run for the U.S. Senate, he turned to Jones, using a combination of chutzpah and flattery.

Obama said that Jones had enough power to get someone elected U.S. senator, Jones recalls. "I said all that sounds good and everything, and I had never even thought of it, which I hadn't," Jones says. "I said, 'If I have that kind of power, do you know of anyone I can make?' He said, 'Me.' "

It was a gutsy move for a junior state senator. Obama was ambitious, but he was far from a political star in Chicago's largely black South Side. That was made painfully obvious when Obama challenged incumbent U.S. Rep. Bobby Rush in the 2000 Democratic primary, and lost — badly.

He was a young politician who couldn't win a congressional seat in his own neighborhood, and yet he was asking the state's political kingmaker to back him for a statewide race.

Furthermore, Obama wanted Jones to help him leapfrog over a line of more established and much more powerful politicians — a bold move, but it turns out that's exactly what happened.

Jones knew that even though Obama had limited appeal in his district, he had wide appeal beyond the South Side.

And Jones offered this story to make his point: Back when Obama was running for his U.S. Senate seat, Jones was traveling with the candidate in southern Illinois, an area known for being white, rural and conservative. Jones said he sat across from an 84-year-old woman who said she hoped she lived long enough to vote for Obama, because he "is going to be president one day," Jones recalls. "And that was her first time meeting him."

That underscores another important lesson Obama learned in Chicago: the importance of building multiethnic coalitions. South Side black politicians traditionally build bedrock black constituencies by standing up to the white establishment.

Obama embraced it. He was eager to lock arms with white leaders in politics and business, says Washington, the Sun-Times columnist.

Geography also helped Obama. His state Senate district was in Hyde Park, a multiethnic enclave in the heart of Chicago's "black belt." It is home to the University of Chicago and much of the city's black elite.

"There's this bubble of Hyde Park, where things that aren't politically possible in other parts of the city are possible there," says Ben Calhoun, a political reporter with Chicago Public Radio. "You don't have to become a precinct captain. You don't have to look for an opportunity to run for state rep, and then run for state Senate, and then maybe a decade down the line for Congress or the U.S. Senate. He was able to just — not do an end run — but go through the side door. He just sort of slipped around the normal ladder that Chicago politics requires people to slowly work their way up."

Hyde Park is an island of independence that seems to be always locked in battle with the Democratic machine that runs the city. Politicians from Hyde Park who dared to cozy up to that machine would have a hard time rounding up re-election votes.

Obama forged a new path. The more powerful he became, the more he embraced that machine, but very carefully.

The people who helped launch Obama's early career are proud of the Democratic nominee and pleased that they share a piece of history — how to be tough, how to work the system, how to survive.

But several people expressed a certain discomfort about how Obama used that Chicago education as his star continued to rise.

"I'm afraid he learned to go along," says Dobry, the Hyde Park political activist. "There's a fellow I know, another committeeman, 'Bull Jive' Taylor. [He] used to say to me, 'Alan, why don't you go along? Everything would be so much easier. Everything would be so much smoother.' And I think Barack learned to go along. It may get him elected president, but it doesn't make me happy."