Accessibility links
Joe Pug: 'Hymn #101' One of the most surprising facts about Chicago, Ill.-based singer/songwriter Joe Pug is that he's only 23 years old. Not only does his voice sound beautifully mature, but the lyrics on Pug's debut EP, Nation of Heat, possess a wisdom seemingly beyond his age. 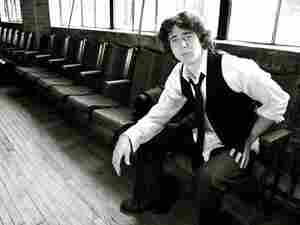 Note: This week we're featuring some of the bands performing at this year's South by Southwest music festival. This artist was originally featured in October, 2008.

One of the most surprising facts about singer-songwriter Joe Pug is that he's only 23 years old. Not only does Chicago-based singer have a beautifully mature voice, but the lyrics on Pug's debut EP, Nation of Heat, possess wisdom seemingly beyond his age. Pair that with his powerful songwriting and it's nearly impossible to avoid drawing comparisons between Pug and folk legends like Bob Dylan or contemporaries like Josh Ritter.

The EP begins with the gripping "Hymn #101." Besides Pug's voice, the song's only instrument is his acoustic guitar, and the minimalist approach allows listeners to place their focus on his poetry. "They say I come with less than I should rightfully possess / I say the more I buy, the more I'm bought / And the more I'm bought, the less I cost," he sings. Those are the sort of lyrics that are all over the seven songs on Nation of Heat. They're lines that become more complex and compelling the more time you spend untangling their meanings. While other songs on the EP add bits of harmonica and banjo to the mix, the focus of Pug's first effort is always the fascinating narratives he weaves.

All things combined make for an impressive debut from someone who only performed his first headlining show earlier this year.