Accessibility links
GM's Autoworkers In Germany Brace For The Worst The global financial crisis is ratcheting up fears of recession. Germany's "rust belt" has been hit hard by the economic slowdown. Opel, General Motors' European brand, is the largest employer in the town of Bochum — where the unemployment rate is over 9 percent. Autoworkers there heard this week that their situation is likely to get worse.

Listen
GM's Autoworkers In Germany Brace For The Worst

The global financial crisis is ratcheting up fears of recession. Germany's "rust belt" has been hit hard by the economic slowdown. Opel, General Motors' European brand, is the largest employer in the town of Bochum — where the unemployment rate is over 9 percent. Autoworkers there heard this week that their situation is likely to get worse. 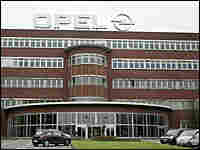 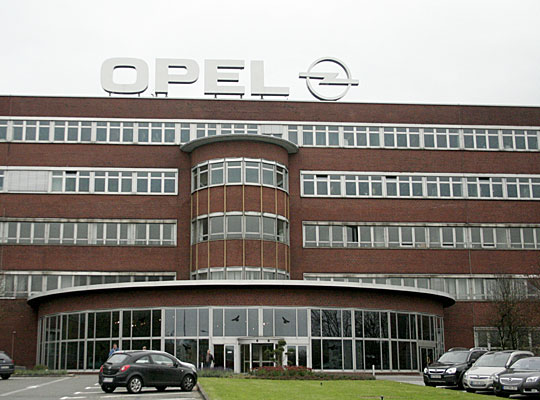 The European efforts come at a time when some of their economies are already slowing down. The unemployment rate is already over nine percent in the town of Bochum. It's in the rural valley, a famous home of German industry, and in that town, workers heard this week that their situation is likely to get worse. NPR's Tom Gjelten reports.

TOM GJELTEN: Among the people in Bochum who feel hard times coming is Horst Roman(ph) who has an upscale used car business on the edge of town. The Mercedes, Volkswagens and Audis he has for sale are all sparkling clean, but his showroom this day is utterly deserted. Horst sits in his darkened office smoking a cigarette. He hasn't even turned the light on. He's been here since 7 a.m. waiting anxiously for customers to come in.

GJELTEN: Totally dead. Totally quiet. Pointing to his telephone, he says it hasn't rung all morning. Horst Roman has a theory for why the people of Bochum are no longer buying his cars. They've lost their nerve to buy, he says.

GJELTEN: They are all broken, he says. I get the feeling it's like they've all been hit by a hammer. They're all afraid. Nobody dares to take a risk at all. The largest employer in Bochum is Opel, the European car company owned by General Motors. The Opel factory here employs 5,000 workers, and it's by the factory's output that people in Bochum measure their economic situation.

(SOUNDBITE OF A BELL)

GJELTEN: The factory is now open turning out inexpensive Opel cars for sale in Russia, Poland and China as well as Germany. But at the end of last month, Opel shut down production here for two weeks, and this week the workers learned that the factory will close temporarily again next month. This is what makes Bochum workers like Franz Yosef Droos(ph) nervous, he's been with Opel for 33 years.

FRANZ YOSEF DROOS: (Through Translator) In all these years, we've never had a production stand still like this. We've had problems with sales, we've had strikes. And what's happening now with them cutting production so much, this has never happened in all this time.

GJELTEN: This day the company has rolled out its newest car model, the Insignia. It's on exhibit in the factory parking lot here in Bochum for the workers to see. Franz Yosef Droos, along with dozens of other Opel workers, stops to check out the model after finishing his factory shift. He and the other Opel workers pouring over the Insignia don't see it so much as a nice new car but as a product that could revive their company and help save their jobs.

YOSEF DROOS: (Through Translator) This is our flagship. Really we should promote this car better. It's the sign of hope for the Opel company.

GJELTEN: This may be a bit of a wishful thinking. The Opel company's overall sales in Europe are down 14 percent since last September. Opel executives in Bochum declined to be interviewed for this story, but one company official speaking on background said, I'm afraid it will get still worse. Managers say production in 2009 will be unchanged at best. It's not just in Germany that people are buying fewer cars. Also in the United States, in Spain, in Poland, and in Russia, there's now a global problem. Ferdinand Dudenhoffer is a professor of automotive economics at the University of Duisburg in Germany.

FERDINAND DUDENHOFFER: People are very reluctant to consume high price products like cars. That means in 2009, we see big problems in the German car industry. We think that they have to reduce jobs.

GJELTEN: This week the German government predicted economic growth for next year to be 0.2 percent at best. And that estimate was prepared before the financial crisis hit.

DUDENHOFFER: It looks worse because nobody expected that this financial crisis would hurt the markets and the people so strong as it did in the last three or four weeks. The car market will deteriorate in the next months even stronger as we thought a few months ago.

GJELTEN: Bochum and other towns in the Ruhr Valley have been through hard times before. The coal and steel industries that were once the backbone of this region have mostly disappeared. The Opel factory at its peak once employed 20,000 workers, four times the current total. Some small companies have established themselves here in recent years and see themselves as part of the Bochum community, but a global recession would affect everyone, small and big companies alike. And Bochum and thousands of other towns in Germany, in Europe and across the globe are bound to pay the price. Tom Gjelten, NPR News, Bochum, Germany.