Accessibility links
Koushik Bends Genres To His Will Canadian producer, singer and songwriter Koushik is 100 percent do-it-yourself. His wildly diverse sound stretches across psychedelia, pop, soul and hip-hop. He talks about his new album Out My Window, being a math nerd and keeping his head clear.

Listen
Koushik Bends Genres To His Will

Lying in the Sun 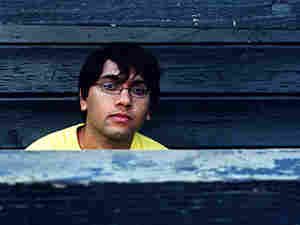 Ever met one of those "both sides of the brain" people? That's Koushik. He's an artist juggling a trillion musical ideas, complete with a master's degree in ethnomusicology, but then there's his other master's degree — the left-brain one, in biostatistics. Koushik has been into math since he was a teenager, even though he sees that as a mixed blessing.

"Most math people I know are lunatics," Koushik says. "But math people are less susceptible to putting things in categories. I don't really think of '60s rock vs. '70s rock, I guess. A lot of things are just music, or sound."

Koushik's parents, who emigrated from Calcutta to Ontario in the '60s, had him studying classical Indian music when he was a boy. He also got a healthy dose of dance music, thanks to his older brother, a successful techno producer. As he grew up, Koushik's own tastes spread to all sorts of rock, and to rap music.

Koushik's first full-length album, Out My Window, isn't just the sign of an eclectic record collection begging to be mined for samples.

On the record, Koushik shows off his diverse palette and flexes his fluency across genres. Melted over the top of it all are Koushik's breathy vocals. The air behind his lyrics somehow chills out even the heaviest beats. He says his vocals snap into place, almost like another instrument, because of the way he puts his songs together.

"The lyrics — some of them were written in a strange way," he says. "The lyrics just came out of the tracks. Right now, I'm in disbelief that it worked out in the end, that the vocals fit the music."

The chill-out factor in Koushik's mood music comes partly from the great outdoors. He's no recluse, but he likes to spend time alone, roaming the mountains near his home in upstate Vermont, which helps keep his head clear.

"One of the biggest challenges as a musician is keeping that clear brain when you are working on stuff — almost drawing a blank and just going from there," he says.

Koushik is already going big-time, at least in underground hip-hop circles. His popularity has grown in the past several years, thanks largely to underground mix tapes. His record company — the L.A.-based Stones Throw label — has helped draw fans keen on Koushik's eclectic rap and funk infusions.

Koushik is all A-game on Out My Window. The former math nerd serves up a warm and dense ethereal trip that'll have you floating in no time.