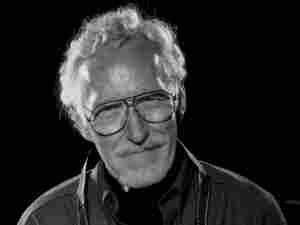 California is the land of sunlit beaches, cars and cool jazz. They all play a part in the photography of William J. Claxton, who died in Los Angeles on Oct. 11, one day shy of his 81st birthday.

Claxton was born in Pasadena and made his name with photographs of an Oklahoma trumpet player whose career took off in California: Chet Baker. In fact, Claxton's moody images helped propel Baker to stardom.

To say that Baker was photogenic would be an understatement. But Claxton got it almost by accident. The photographer told the Irish Times in 2005, "I was up all night developing [in 1951] when the face appeared in the developing tray... an angelic face with pale white skin and, the craziest thing, one tooth missing — he'd been in a fight. I thought, 'My God, that's Chet Baker.' "

Claxton's black-and-white images are striking. Some are posed, while others capture spontaneous moments: Duke Ellington smiling at the piano; Mel Torme leaning back, eyes closed, pushing out a song. One of the most haunting shows Baker looking down at a piano's keyboard, the background washed out by the light coming in from behind him, the outline of his head reflected in the closed piano lid. But Claxton also took musicians out of the clubs and recording studios and photographed them on the California beaches, in convertibles, in the mountains.

Claxton called his photographs "jazz for the eyes" and likened his camera to the jazz musician's axe. He told music journalist Don Heckman, "It's the tool that you would like to be able to ignore, but you have to have it to convey your thoughts and whatever you want to express through it."

Claxton started collecting records when he was a kid — 78s by Count Basie, Duke Ellington, Lena Horne and others. He pasted their pictures into scrapbooks. By the time he was 12, he was sneaking into jazz clubs and photographing musicians with his obsolete 4x5 Speed Graphic camera. In one of his books, Claxton recalled hanging out with Charlie Parker and some fans early into the morning and then taking them all to his parents' house for an impromptu shoot.

The photographer began making money from his pictures when Richard Bock, co-founder of the Pacific Jazz record label, hired Claxton to shoot album covers. His work got noticed and Claxton started getting calls from Time, Life, Vogue and other magazines to take celebrity photos. He said he drew on his degree in psychology to deal with difficult personalities such as Barbra Streisand, George C. Scott or Anita O'Day. Claxton told the Irish Times that the first thing Steve McQueen said to him was, "I hate photographers. Stay in the background." The two eventually became friends.

Claxton helped make news in the early 1960s with his fashion photographs of Rudy Gernreich's groundbreaking topless swimsuit. The model was Claxton's wife, Peggy Moffitt. The pictures created a sensation.

Claxton won numerous awards for his work and published more than a dozen books. A short film that he made, Basic Black, is credited as the first fashion video and now appears in the collection of the Museum of Modern Art in New York.

But William James Claxton will always be associated with the light of California and the sound of the jazz that was made there in the 1950s and '60s.