Accessibility links
Terrence Howard Talks Tunes, Family, Science Two weeks ago, Terrence Howard's mother died. In the wake of her death, he is considering his family, his music and his career. He says it was not until two weeks ago that he became a grown man. 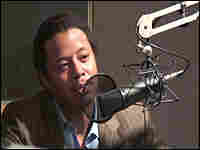 Watch A Video Of Howard's Interview On The Soapbox Blog
NPR 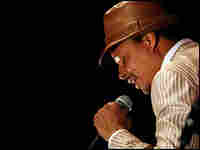 Howard told NPR's Scott Simon that even though he doesn't think of himself as a singer, "I can express myself in a melodic sense." Diane Bondareff/Getty Images hide caption 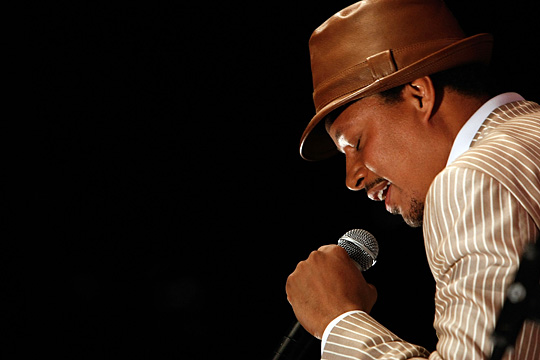 Howard told NPR's Scott Simon that even though he doesn't think of himself as a singer, "I can express myself in a melodic sense."

Terrence Howard has been a busy man this year. He recently released his first album, "Shine Through It," which he also produced. But Howard has been busy pretty much every year since the early 1990s, when he played Jackie Jackson in the made-for-TV movie The Jacksons: An American Dream.

Howard is probably best known for his Oscar-nominated role as Djay, a pimp who dreams of making it as a hip-hop star, in the 2005 film Hustle & Flow. During a visit to NPR this week, he looked every inch a movie star, wearing a soft fedora cocked Sinatra-style — like a man who still feels that a star should dress the part, not dress down to avoid being recognized.

Howard's artistry has many influences, but he told NPR's Scott Simon that it all started with his great-grandmother Minnie Gentry, herself an actor and musician. "She introduced me to acting," Howard says, "because there was magic and believability in what she did."

She also introduced him to music by giving life to its notes.

"She would make me sit down at the piano and would teach me the relationship between A and D and G and C, why they were best friends, why they were relatives," Howard says. "She talked to me about music in terms of family, so it's become part of my family."

Family, however, does not always bring back positive memories for Howard. His childhood was tough — his family fell into poverty when his father was convicted of manslaughter and spent 11 months in prison.

"My father came back from prison a different person, because the kind nature he had, he had to lose in order to survive prison," Howard says.

Howard experienced another loss when his mother died two weeks ago.

"I never felt grown until two weeks ago," he says. "Two weeks ago, I became a grown man, because no longer did I have a light to follow. I had to become that light."

But Howard says he is pleased that his mother got to hear his debut CD before she died, and that she was proud of his successes.

"This was her dream, to be an actor and a musician," he said. "My dream was to be a physicist." (That dream started, he said, when, as a child in Cleveland, he was contemplating why bubbles are round.)

But family is also the source of much joy for Howard. He says he is intensely proud of his children, particularly his 13-year-old son, Hunter, who sang backup vocals on "Shine Through It." At the moment, Howard is teaching his son another of his many vocations: carpentry and home renovation.

"I'm raising a really beautiful young man that will probably become the scientist I always wanted to be," Howard says.

Although subdued at his mother's passing, it's clear that Howard is often contemplative. He says he tends to store his emotions to develop the characters he plays — a trait he thinks is fraught with danger for some actors.

"I don't see the pain of life as much because I've played so many characters," Howard says of the numbness that can come from acting so often. "And I think that's what happens to a lot of actors, and therefore they get hooked on drugs because they're desperate to get away from not feeling. They want to be excited or something."

Perhaps that understanding is what has kept Howard from going down the same path. And there's something else he understands about acting.

"When I first started acting, I thought it was about the best liar," Howard says. "I thought the best liar was the best actor. But it's the best truth-teller. To find the truth on those pages of black and white and to believe in it so much. It has to be honest; it has to be truthful."