Accessibility links
Next President Faces Growing Crisis In Afghanistan When a new administration takes over in January, it will face challenging and overlapping problems in Afghanistan and neighboring Pakistan, two countries that are critical to U.S. national security. The conflict in Afghanistan, once called "the forgotten war," has been escalating in recent months.

The fifth of a five-part series 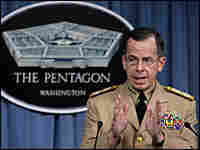 Adm. Michael Mullen, chairman of the Joint Chiefs of Staff, during a press briefing in August. In testimony before Congress, he said, "I'm not convinced we're winning in Afghanistan. I am convinced we can." Alex Wong/Getty Images hide caption 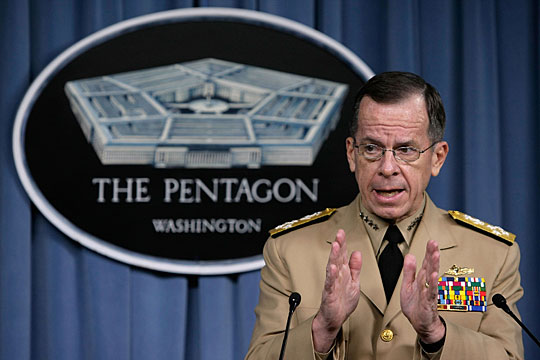 Adm. Michael Mullen, chairman of the Joint Chiefs of Staff, during a press briefing in August. In testimony before Congress, he said, "I'm not convinced we're winning in Afghanistan. I am convinced we can."

The 1,600-mile frontier between Afghanistan and Pakistan has always been a wild and often violent region, but never more so than today. There is warfare on both sides of the border. In the West, U.S., NATO and Afghan government forces are battling the Taliban and other insurgents allied with al-Qaida. And in the East, the Pakistani army is engaged in a sustained campaign against those same insurgents in one of the tribal territories along the frontier. This five-part series focuses on these conflicts, which have major implications for whoever succeeds George W. Bush in the White House.

When a new administration takes over in January, it will inherit the challenging and overlapping problems of Afghanistan and Pakistan, two countries that are critical to U.S. national security.

It wasn't that long ago — just over a year or so — that the conflict in Afghanistan was considered "the forgotten war." The White House and the Pentagon were focused on Iraq. While things started to stabilize there, the situation in Afghanistan steadily deteriorated: The Taliban has grown in strength and numbers; attacks on American and NATO troops have soared; and U.S. intelligence agencies say unless there are major changes, the downward spiral will continue.

In recent congressional testimony, Adm. Mike Mullen, the chairman of the Joint Chiefs of Staff, made it clear that the incoming U.S. president faces a stark reality. "I'm not convinced we're winning in Afghanistan," Mullen said. "I am convinced we can."

Over the centuries, no invader has ever succeeded in Afghanistan, whether it be the Soviets in the 1980s, the British in the 1800s or Iran and India in the 17th and 18th centuries.

A New Strategy For Afghanistan?

The Bush administration, in its final months in power, is developing a new strategy for Afghanistan and has ordered some 8,000 additional troops — well short of what senior U.S. commanders in Afghanistan are asking for.

Anthony Cordesman with the Center for Strategic and International Studies says he is not surprised the commanders are being shortchanged.

"We have never put significant resources into this war," Cordesman says. "Every year we haven't met the requirements from the ambassador, from the field commander. We have let the Taliban grow in power without providing anything like the resources we provide in Iraq."

Like many others, Cordesman says the long-term solution will require more than just military action.

Republican presidential candidate John McCain places hope in Gen. David Petraeus, who, as the head of U.S. Central Command, will oversee operations in Afghanistan. Petraeus is credited with turning around the situation in Iraq, in part by paying local militias to provide security. In the second presidential debate, McCain indicated he hoped Petraeus would have success in Afghanistan by using the same method: "The same fundamental strategy that succeeded in Iraq — and that is to get the support of the people," McCain said.

During the debate, his Democratic opponent, Barack Obama, said the U.S. would have to stem the flourishing Afghan opium trade, which generates millions of dollars annually for the Taliban. And, Obama said, Washington needs to press the government of President Hamid Karzai to rein in corruption and help the people of Afghanistan.

"We have to have a government that is responsive to the Afghan people, and, frankly, it's just not responsive right now," Obama said.

But there hasn't been a strong central government in Afghanistan's recent history. Bob Grenier, the CIA station chief in Pakistan from 1999 to 2002, says the U.S. may have to abandon the idea of creating one, and start dealing with tribal leaders on a local level.

"It's going to require a lot of engagement in very small, godforsaken places on the ground, but I think we need to empower local leaders, and that's going to mean arming and equipping, and trying somehow to lead local village defense forces or the local equivalent," Grenier says.

Grenier says it's important to build up local forces in the Pashtun area along the border with Pakistan. The Taliban and other Islamist groups regularly cross into the area from sanctuaries in Pakistan to launch attacks on U.S. and NATO troops.

Bruce Riedel spent nearly three decades in counterterrorism at the CIA and is now at the Brookings Institution, a Washington think tank. He says if a new administration wants to succeed in Afghanistan, it must be with the cooperation of Pakistan, but he stresses such action may not be easy.

"Don't expect straight lines in Pakistan," Riedel says. "Pakistan is an incredibly complex country, and Pakistan politics are full of contradictions, conspiracies and sleights of hand."

Riedel says former Pakistani President Pervez Musharraf was an expert at convincing President Bush that he was going after terrorists and at the same time allowing the Taliban to thrive on Pakistani soil. Riedel says the next U.S. president needs to make it clear to Pakistan's new government that those days are over.

"One of the things he needs to convey to Islamabad is that the time for double-dealing is over," Riedel says. "You need to be on one side of the war on terror — our side or their side."

Hassan Abbas, a research fellow at Harvard's Kennedy School of Government, says a new U.S. administration will have to study the past to avoid making the same mistake of blindly handing over tens of millions of dollars to the Pakistani government.

"Despite all the money and ammunition and weapons, things are worsening," Abbas says. "Why is that so? Unless we are able to review the past few years, we will not be able to strategize better for the future."

Shuja Nawaz, a Washington-based expert on the Pakistani military and the author of Crossed Swords: Pakistan, Its Army, and the Wars Within, says U.S. aid to Pakistan needs to be better distributed. Nawaz points to a proposed bill by vice presidential candidate and Democratic Sen. Joseph Biden and Republican Sen. Richard Lugar.

The bill would authorize $7.5 billion over the next five fiscal years in nonmilitary aid to Pakistan — aid that could be used for developmental purposes, such as building schools, clinics and roads. It is based on the condition that Pakistani security forces not interfere in the country's politics or judicial process. The bill also calls for strengthening democracy in Pakistan and better counterterrorism efforts.

Nawaz says something like the Biden-Lugar bill would demonstrate that U.S. commitment in Pakistan goes beyond just battling the Taliban and other Islamist groups along the country's border with Afghanistan.

"That's quite critical, so it's not just seen as trying to resolve a problem for the Americans in the border regions — that they're committed to working with all of Pakistan and helping them," Nawaz says.

There have been some positive signs recently that Pakistan is willing to work with the U.S. in the fight against the Taliban: Pakistan's new president, Asif Ali Zardari, is considered pro-American; there has been a shake-up at the country's powerful intelligence agency; and the Pakistani military has launched an offensive into a Taliban stronghold along the Afghan border.

Grenier, the former CIA chief, says that is a dangerous turn of events.

"Essentially, we are starting a fight that we can't finish," Grenier says. "Because we are generating far more radicalism, we are motivating more people to fight against us and to fight against the Pakistani government."

A new administration will somehow have to balance long-term goals with the need for immediate action in both Afghanistan and Pakistan. When it assumes office, it will be walking into the middle of a crisis. Whoever is in charge won't have the traditional six to nine months to assess the situation and draw up a policy for what is no longer the forgotten war.