Accessibility links
Levi Stubbs, Four Tops Lead Singer, Dies Levi Stubbs, lead singer of the Four Tops, has died at the age of 72. The Motown star's hits included "Baby I Need Your Loving," "Reach Out (I'll Be There)" and "I Can't Help Myself (Sugar Pie, Honey Bunch)."

Baby, I Need Your Loving (Watch The Four Tops sing on YouTube.)

Reach Out (I'll Be There)

It's the Same Old Song(Watch The Four Tops sing on YouTube.)

Shake Me, Wake Me (When It's Over) 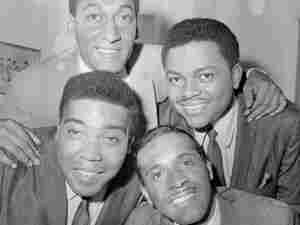 The Four Tops, one of Motown's most successful groups, in 1966. Levi Stubbs is at lower right. Harold Clements/Hulton Archive / Getty Images hide caption

When I was in high school, back in the '60s, one of the songs that would invariably make high school girls swoon and high school boys' eyes glint with perceived opportunity was the Four Tops' "Baby, I Need Your Loving."

If you were lucky, when the intro started, some cute boy from the football team would snake out an arm, capture your wrist and pull you into his orbit. You'd be clasped against a well-muscled chest as you breathed in his after shave and Levi Stubbs pleaded his case:

Levi's baritone--like a velvet scarf pulled over gravel--was the linchpin for the Four Tops' seamless harmonies. They performed together for over 40 years. The bulk of their hits came during Motown's heyday. Working with the legendary song writing team Holland-Dozier-Holland, they released songs that were instant hits then, and remain classics now.

The Four Tops were not only national stars; they were international sensations when they toured abroad. In an era when broken-down bell bottoms, scruffy hair and Army-Navy surplus coats were de rigueur, the Tops were always elegant onstage, whether they were in tuxedos or silk Nehru jackets and medallions.

At Motown's 25th-anniversary celebration, the Four Tops went head to head with the Temptations. The audience screamed with delight. Each group finished the other's lyrics to their signature hits, and the "rivalry" reinvigorated both groups' careers. They often performed together in subsequent years, before crowds of baby boomers and their children. (Many of the hits have been used in commercials, so a new generation has become familiar with them that way.) A New Yorker critic, after a 1993 concert, said it wasn't so much a homage to the oldies as it was "a master class in the golden age of Motor City Soul."

Four decades, 36 albums and countless hits later, the original group finally changed when Lawrence Payton died in 1997. Levi Stubbs stopped performing in 2000 after a series of strokes. He died at home in Detroit the morning of Oct. 17, with his wife, Clineice, at his side. They'd been married since 1960.

A few years before Stubbs died, Aretha Franklin arranged to have him brought onstage when she played in their hometown, Detroit. They sang a duet "I Believe In You And Me." (Whitney Houston introduced it in the 1996 movie The Preacher's Wife.) The stroke's effects were obvious--Stubbs could only use one hand. He was emotional and halting at first, but in the end, the notes came out softly, but faultlessly.

Watching it on YouTube, I could only think of one of the Four Tops' classic hits:

"It's the same old song, but with a different feeling since you've been gone."