Accessibility links
A Test of Courage: Jackie Robinson's Rookie Year When Jackie Robinson stepped onto Ebbets Field on April 15, 1947, it was the beginning of a year that would test his courage, and the mettle of a nation. In his new book, author Jonathan Eig delves into the personal and professional battles that Robinson fought during his rookie season. 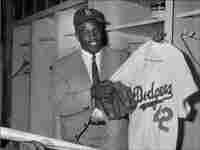 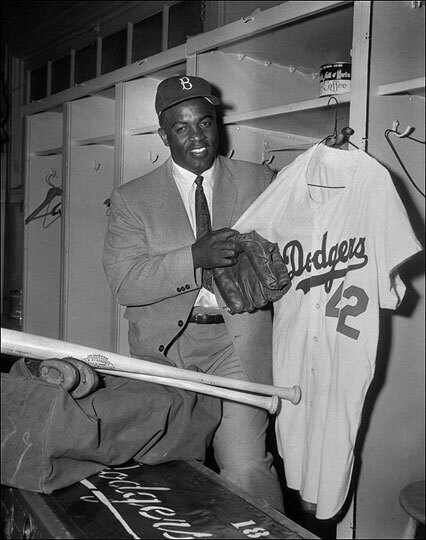 Jackie Robinson packs his baseball gear in the Dodger locker room at Ebbets Field in 1957.

When Jackie Robinson stepped onto the diamond at Ebbets Field on April 15, 1947, it was the beginning of a year that would test not only his personal courage, but the mettle of a nation.

While much of Robinson's life has become folklore, the inside story of his pivotal first year on the Brooklyn Dodgers is less well known.

Before he'd even swung a bat in Brooklyn, the media was comparing Robinson to Frederick Douglass, George Washington Carver and Joe Louis. By integrating baseball, Robinson had the weight of a nation on his shoulders, and he knew it.

In his new book, Opening Day: Jackie Robinson's First Season, author Jonathan Eig delves into the personal and professional battles that Robinson fought during his rookie season. Eig tells Liane Hansen about the man who would lead the Dodgers in their dramatic race for the 1947 pennant.

Free Minds and Hearts at Work

Free Minds and Hearts at Work 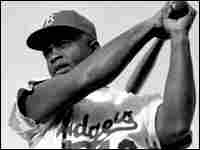 At the beginning of the World Series of 1947, I experienced a completely new emotion, when the National Anthem was played. This time, I thought, it is being played for me, as much as for anyone else. This is organized major league baseball, and I am standing here with all the others; and everything that takes place includes me.

About a year later, I went to Atlanta, Georgia, to play in an exhibition game. On the field, for the first time in Atlanta, there were Negroes and whites. Other Negroes, besides me. And I thought: What I have always believed has come to be.

And what is it that I have always believed? First, that imperfections are human. But that wherever human beings were given room to breathe and time to think, those imperfections would disappear, no matter how slowly. I do not believe that we have found or even approached perfection. That is not necessarily in the scheme of human events. Handicaps, stumbling blocks, prejudices -- all of these are imperfect. Yet, they have to be reckoned with because they are in the scheme of human events.

Whatever obstacles I found made me fight all the harder. But it would have been impossible for me to fight at all, except that I was sustained by the personal and deep-rooted belief that my fight had a chance. It had a chance because it took place in a free society. Not once was I forced to face and fight an immovable object. Not once was the situation so cast-iron rigid that I had no chance at all. Free minds and human hearts were at work all around me; and so there was the probability of improvement. I look at my children now, and know that I must still prepare them to meet obstacles and prejudices.

But I can tell them, too, that they will never face some of these prejudices because other people have gone before them. And to myself I can say that, because progress is unalterable, many of today's dogmas will have vanished by the time they grow into adults. I can say to my children: There is a chance for you. No guarantee, but a chance.

And this chance has come to be, because there is nothing static with free people. There is no Middle Ages logic so strong that it can stop the human tide from flowing forward. I do not believe that every person, in every walk of life, can succeed in spite of any handicap. That would be perfection. But I do believe -- and with every fiber in me -- that what I was able to attain came to be because we put behind us (no matter how slowly) the dogmas of the past: to discover the truth of today; and perhaps find the greatness of tomorrow.

My fight was against the barriers that kept Negroes out of baseball. This was the area where I found imperfection, and where I was best able to fight. And I fought because I knew it was not doomed to be a losing fight. It couldn't be a losing fight-not when it took place in a free society.

Jackie Robinson at the Hall of Fame 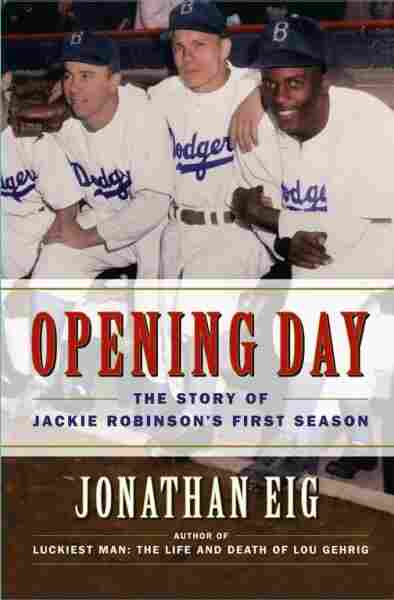