Accessibility links
The Many Faces Of The Great Pumpkin Pumpkin is an autumn staple suited for far more than its traditional Halloween and Thanksgiving roles. In soup, stew or cake, or just roasted in long slices, pumpkin is appropriate for any chilly evening, whatever you happen to be celebrating.

The Many Faces Of The Great Pumpkin

The Many Faces Of The Great Pumpkin 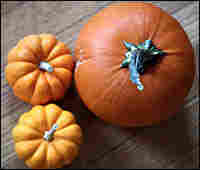 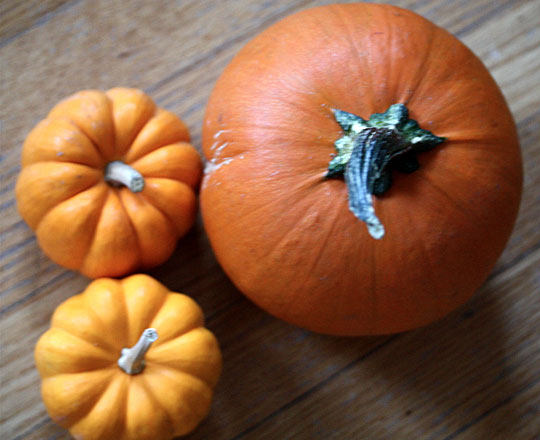 Get recipes for Pumpkin Soup With Pepita (Pumpkin Seed) Pesto, Baked Pumpkin With White Beans, Pumpkin Souffle and Pumpkin Bread. Plus, check the "Comments" section at the bottom of the page to find the pumpkin cupcake recipe mentioned in the story.

I rarely wear a costume on Halloween, don't have kids and live in an apartment building, which means no trick-or-treaters. Yet each year, I make a batch of pumpkin cupcakes topped with a swirl of dark chocolate ganache. I just can't help myself, and my co-workers don't seem to mind.

When October arrives in San Francisco, my thoughts turn to soaking up as much sun as possible before winter descends — and dreaming up ways to use all those pumpkins I see pretty much everywhere. Few other vegetables are available only during their season. Come late September, farmers markets are overloaded, but good luck finding a pumpkin in April.

Pumpkins seem almost to be fall. This time of year means days of shrinking light, goodbye to good tomatoes, leaves turning and drifting down in great piles, a change in the air and the return of my favorite orange squash.

Whether it is because they're as fat and round as a harvest moon or because their sweet, soft texture is both comforting and healthful, pumpkins help soothe that end-of-summer ache.

When I was growing up in Northern California, we planted pumpkins in our backyard garden mostly just for carving for Halloween. If we'd skipped the garden that year, we went to the pumpkin patch down the road and sipped apple cider while picking out the best specimens. We'd lug them home, and my dad would scoop out their pulpy innards, saving the seeds for later consumption. For a long time, I was more concerned with the perfect pumpkin shape than its contents, but I've come to appreciate the inner beauty of the pumpkin as well.

The pumpkin is a multi-use vegetable. The seeds are delicious after being soaked in lightly salted water and then dried in the oven, perfect for scattering on salads or eating out of hand, and the flesh is sweet and mild, especially after a sojourn in the oven. Then, too, there are the health benefits: Pumpkins are high in vitamin A, iron and potassium.

American Indians recognized the pumpkin's versatility, using it for food and medicine. The large orange squash originated in Central and South America, and early settlers of the Americas quickly learned to cultivate it — stewed pumpkin became a popular dish — and made it a diet staple. Colonists made the first pumpkin pies, for example, by filling a de-seeded pumpkin with milk, spices and honey, and baking it in hot ashes.

Nowadays in the United States, pumpkins are grown primarily for processing into cans of pumpkin pie mix or pumpkin puree, with a small percentage grown for ornamental sales through you-pick farms, farmers markets and retail sales. Illinois, Ohio, Pennsylvania and California are the top pumpkin-producing states.

Though the "Connecticut field" variety is the traditional American pumpkin used for jack-o'-lanterns, smaller, thicker-walled pumpkins are ideal for pies and baking. Often called sugar pumpkins, they are much sweeter and better for cooking. While you can eat the larger jack-o'-lantern varieties, a good rule to remember is the smaller the pumpkin, the more flavorful the results. Like most squash, pumpkins keep well in winter when stored in a cool, dry place for up to six months.

Most of us eat pumpkins in pie, or occasionally in a soup, but oh so much more can be done with these autumnal gems.

Swap chunks of pumpkin for butternut squash in a creamy curry, or simply bake slices of pumpkin drizzled with olive oil until the oven's heat caramelizes it all. Fold pumpkin puree into a lightly sweetened cake, or tuck it into ravioli topped with fried sage leaves. If you have a few spare hours, fill a whole pumpkin with a root vegetable stew, and bake until the top is lightly blackened and melting.

Preparing puree from a whole pumpkin may seem like a lot of work, but it isn't. Cut a pumpkin in half and discard the stringy insides, then peel and cut the pumpkin into chunks. Place in a saucepan, cover with water and boil until the chunks are tender. After cooling, puree in a food processor or mash by hand. Use the puree in any recipe that calls for pureed pumpkin. Pumpkin from a can is perfectly acceptable, but lacks a fresh-from-the-field taste.

Some years ago, my mom made pumpkin soup for Thanksgiving dinner. We hardly noticed the turkey. She served the soup in a hollowed-out pumpkin placed in the center of the table.

My dad had picked the biggest pumpkin he could find from the garden, and it felt absolutely right to celebrate this most American of holidays with the quintessential squash of its native inhabitants. But a pumpkin — in soup, stew, cake or roasted in long, slender slices — is appropriate on any chilly fall evening, whatever you happen to be celebrating. 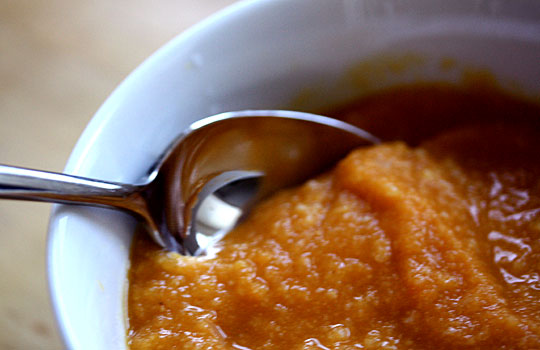 Top bowls of this sweet and smoky soup with a variation on traditional pesto.

For the soup, cook the carrots, onion, garlic and bay leaf in olive oil in a 6- to 8-quart heavy pot over moderate heat, stirring occasionally, until vegetables are softened, 5 to 6 minutes. Add pumpkin, salt, cumin and pepper and cook, stirring occasionally, until pumpkin begins to soften around edges, about 15 minutes. Stir in broth and water, and bring to a boil. Reduce heat and simmer, covered, until vegetables are very tender, 35 to 45 minutes. Discard bay leaf.

Blend soup with an immersion blender or in batches in a food processor until smooth. Top with the pesto and serve hot. 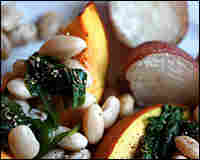 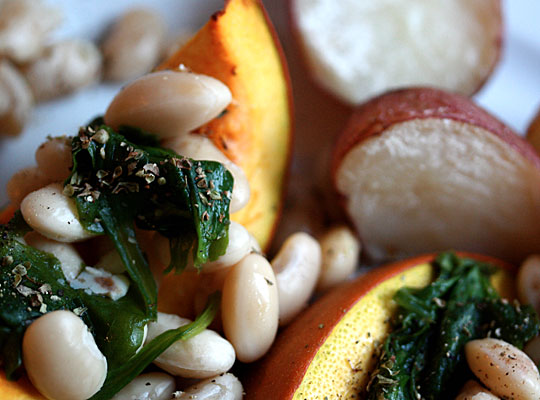 Squash baked in the oven is one of fall's simplest and most perfect dinners. I've topped this with a sort of white bean stew to make it a more complete meal.

1 3-pound pumpkin, seeded with the peel left on

Preheat oven to 450 degrees. Cut pumpkin quarters crosswise into 1/2-inch-thick slices. Toss with 1 tablespoon oil and salt and pepper in a shallow baking pan, and arrange slices in one layer. Roast in middle of oven until just tender, about 20 minutes. Remove from oven and cover with foil to keep warm.

Meanwhile, saute the garlic in about 2 tablespoons of olive oil in a large frying pan over medium heat. After a few minutes, add the beans, chard or spinach, oregano and salt and pepper to taste. Simmer on low for about 5 minutes, until the greens are wilted.

Arrange the pumpkin slices, about 2 per plate, and top with generous spoonfuls of the beans. 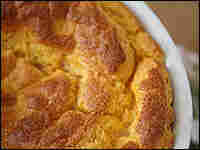 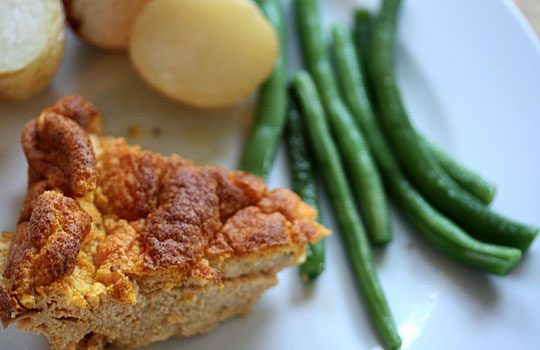 Souffles may seem intimidating, but they shouldn't. This one is made savory by Parmesan cheese and sage, with just a little bit of sweetness from the pumpkin. This recipe is adapted from Deborah Madison's Local Flavors (Broadway 2002).

4 tablespoons unsalted butter, plus extra for the dish

Preheat oven to 375 degrees. Butter a 6-cup souffle or gratin dish and dust it with a few tablespoons of the Parmesan.

Put the shallot, sage and cream in a small saucepan over low heat. Bring slowly to a boil, then turn off the heat, cover, and let steep for 15 minutes.

Melt the butter in a saucepan, stir in the flour, and cook for 1 minute while stirring. Whisk in the milk and stir until it thickens. Add 1 teaspoon salt and stir in the remaining Parmesan. Turn off the heat and stir in the egg yolks, pumpkin and the shallot-cream mixture. Season with pepper.

Beat the egg whites with a pinch of salt until they form firm peaks but are still somewhat soft. Fold the whites into the pumpkin mixture. Scrape the batter into the prepared dish, and bake until golden brown and set, about 30 minutes. Serve immediately. 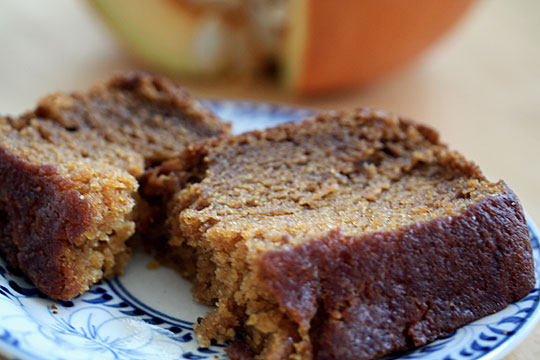 Moist, pumpkiny and not too sweet, this bread keeps well and is a perfect fall gift. Try swapping 1/2 cup of applesauce for 1/2 cup of the oil for a lower-fat version. Adapted from The Gourmet's Guide to Northwest Bed & Breakfast Inns by Anne Nisbet (Speed Graphics 1998).

In a large bowl, mix together flour, sugar, spices, salt and baking soda.

Divide the batter equally between loaf pans. Bake for one hour, or until a knife inserted in center of the loaf comes out clean. Turn out on wire racks to cool.