Accessibility links
Gut Bacteria May Cause And Fight Disease, Obesity : Krulwich Wonders... These genes aren't from your parents, but the genetic code of the bacteria in your gut can determine your health -- and affect conditions like type 1 diabetes and obesity.

Listen
Gut Bacteria May Cause And Fight Disease, Obesity 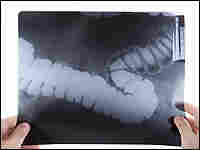 Who lives here in the large intestine? What do they do? iStockphoto.com hide caption 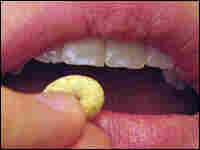 The bacteria in some people's intestines are good at digesting Cheerios, whereas other peoples' intestines don't process the cereal's calories. Alison Richards/NPR hide caption 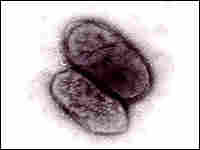 Quick question: Whose genes matter most to you? Your mom's? Your dad's? Or genes inside the trillions of bacteria living in your intestine, your mouth, your nasal passages and a lot of places we'd rather not mention?

The answer: Obviously, your parents' genes matter, but it turns out we humans have two sets of genes in us: the ones we inherited from our human ancestors and the ones that walk in through our mouths starting when we're just hours old.

"We're all sterile until we're born," says Glenn Gibson, a microbiologist at the University of Reading in Britain. "We haven't got anything in us right up until the time we come into this big, bad, dirty world."

But as soon as we pass out of the birth canal, when we are fetched by a doctor's hands, placed in a hospital crib, put on our mother's breast, when we drag a thumb across a blanket and stick that thumb in our mouths, when we swallow our first soft food, we are invaded by all sorts of bacteria. Once inside, they multiply -- until the bacteria inside us outnumber our human cells.

Because the bacteria are independent organisms, they have their own genes and their own talents -- and scientists are just now discovering what they can do.

Biologist Jeffrey Gordon of Washington University in St. Louis became quite well known a few years ago for a group of very skinny mice in his lab. The mice were skinny because they had no bacteria in their intestines. Gordon had kept them completely bacteria-free. If a bacteria-free mouse eats, food passes right through the intestine, significantly undigested.

So without bacteria, the mouse can eat and eat and eat and never gain weight. But when Gordon exposed the mice to "this big, bad, dirty world," as Gibson calls it, the mice suddenly turned their food into more calories and gained weight. So bacteria matter. Apparently, they can digest food far more efficiently.

When Gordon and a bunch of other scientists began to look more closely, they discovered that bacteria are not all alike. There are as many of 500 different species in a normal human intestine and maybe another 500 in our mouths. David Relman of Stanford University discovered that each tooth has its own bacterial community. Dr. Julia Segre at the National Human Genome Research Institute found one set of bacteria on skin at the bend of a human elbow and a completely different set higher up on the arm.

Not surprisingly, a person who grows up in Argentina and another who grows up in northern Alaska tend to acquire different bacteria in their intestines and mouths -- and, stunningly, these differences seem to matter.

Imagine a Cheerio sliding down the digestive tracts of an Inuit and an Argentine. The Inuit's intestinal bacteria are great at digesting oats; the Argentinian's bacteria don't much care for oats. What happens? The Inuit gains weight. The Argentine makes more frequent visits to the restroom.

It is becoming increasingly clear that different bacteria provide people with different advantages and disadvantages. All over the world, teams of scientists are looking at how bacteria affect the folks they live in. Certain bacteria have been linked to the incidence of stomach ulcers, but take away those bacteria with antibiotics, and young people get more asthma, hay fever, allergies and eczema.

So bacteria -- or, rather, the genes that bacteria bring into our bodies -- can help us and hurt us. It's a very complex relationship.

Can I Change What I've Got Inside Me?

Naturally, that raises the question: Can I change what I've got? "The obvious implication here," microbiologist Gibson says, "is that if you find bacteria which are responsible for diseases -- and you can include obesity in this -- you can then target them to reduce the risk of that disease."

University of Chicago immunologist Alexander Chervonsky, with collaborators from Yale University, recently reported that doses of the right stomach bacteria can stop the development of type 1 diabetes in lab mice. "By changing who is living in our guts, we can prevent type 1 diabetes," he told The Wall Street Journal.

The bottom line: We now have two sets of genes to think about -- the ones we got from our parents and the ones of organisms living inside us. Our parents genes we cant change, but the other set? Now that is one of the newest and most exciting fields in cell biology.

Full disclosure: Biologist Jeffrey Gordon, whose work has been described in New Scientist magazine and The New York Times, was a housemate of Robert Krulwich's when they attended Oberlin College. Also, special thanks to the "bacteria" recruited for the radio skit: NPR's Margot Adler, Jim Zarroli, Agnes Janiszewski and -- especially because of his extraordinary ability to scream with delight -- Josh Rogosin.