Accessibility links
Jazz Guitarist Earl Klugh Stays Humble Starting out in saxophonist George Benson's band as a teenager, guitarist Earl Klugh has found nothing but success since then. With just a nylon-string guitar, the Grammy-winning Klugh treated Jazz24 to solo guitar treatments of two jazz standards and an original. 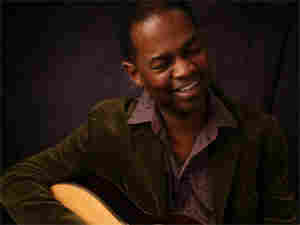 Earl Klugh learned how to play guitar by listening to Chet Atkins records. courtesy of the artist hide caption

I first met guitarist Earl Klugh about 35 years ago, when he was standing by himself outside a nightclub in Seattle. Klugh was probably in his late teens at the time, and was performing with guitarist George Benson. The reason he was standing out in front of the place was that, in those days, Washington State liquor laws allowed musicians under the age of 21 to play in venues that served liquor, but would not allow them to remain in the club when they were not actually onstage, performing. So every time Benson's band took a break, Klugh had to either sit in the dressing room or go outside. It was my good fortune that, this time, he chose to go outside.

He was surprised to be recognized by a passerby, and seemed pleased to have someone to talk to during his momentary exile. We walked around the block while Klugh talked about how fortunate he felt to be working with a musician of Benson's caliber, and how much he was learning. All in all, Klugh struck me as an earnest, good-natured and humble person, especially considering the fact that he was having so much success at such an early age.

Three and a half decades later, when Klugh was scheduled to come into our studios for a performance and interview, I couldn't help but wonder whether his decades of success had changed him. As it turns out, the answer is, "Absolutely not." In the years that had passed between our two meetings, Klugh put out more than 30 recordings, sold millions of albums, won a Grammy and performed all over the world. But when he walked into our studios on an early September afternoon — the day after his 55th birthday — he was the same humble, good-natured person I'd taken a walk with all those years ago. The only thing that had changed was that he'd become an even more accomplished guitarist.

During our interview, Klugh talked about how he taught himself to play guitar by listening to Chet Atkins records, as well as — Chet Atkins notwithstanding — why he favors the nylon-stringed classical guitar over the steel-stringed guitar. He also treated us to his solo guitar treatments of two jazz standards ("But Beautiful" and "The Night Has a Thousand Eyes"), as well as one of his own solo guitar compositions, "Venezuelan Nights," from his recent CD The Spice of Life. It was a delightful session with a great guitarist and a lovely human being.