Accessibility links
Brooklyn Bar Serves Opera On Tap Just off Flatbush Avenue in Brooklyn, a dive bar has become the local watering hole for murderers and tyrants, adulters and virgins, Don Juans and divas. In fact, all of the great characters of grand opera have found a second home in the backroom of Freddy's Bar, where the company Opera on Tap serves up a monthly recital. 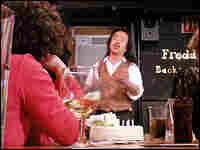 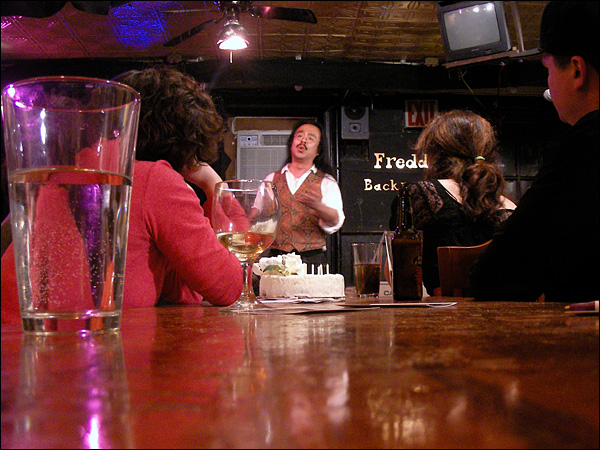 Ko Kaiden, a tenor from the group Opera on Tap, serenades Freddy's bar with selections from Spanish opera.

Just off Flatbush Avenue in Brooklyn, a dive bar has become the local watering hole for murderers and tyrants, adulters and virgins, Don Juans and divas. In fact, all of the great characters of grand opera have found a second home in the backroom of Freddy's Bar, where the company Opera on Tap serves up a monthly recital for the kind of audiences that might get kicked out of the Met.

"The stigma of opera is that it's pretentious and inaccessible," Opera on Tap's founder, Anne Ricci, says. "We give people the ability to hear a variety of the classic repertoire in a place where they are comfortable."

And if that means the dim, beer-stained space next to the bathroom in Freddy's Bar, so be it. T-shirts? No problem. Drinking? Encouraged.

In fact, Ricci might have been a little drunk when she thought up the idea. As a classically trained singer, she moved to New York a few years ago to make it big but ended up working at a cheese shop. A little depressed over her lack of singing offers and mounting debt, she went to Freddy Bar to hear a country music band. Over a beer, she complained to the bartender that the band seemed to be having a lot more fun than she was. The bartender offered her the backroom once a month.

Ricci and her friends, all thirty-something undiscovered divas, produced an irreverent, laid-back and glorious night of grand opera. They discovered that this music actually fits into the noisy and raucous Freddy's.

"Anything can make a great bar song, as long as the singer can sell it to the audience," says Ricci.

It doesn't hurt that the immortal themes of opera — love, jealousy and revenge — also happen to make a great night of drinking. The company got a monthly gig at Freddy's and is starting to appear at other bars in Brooklyn.

On a recent Thursday night, a few dozen people howled with laughter in the back room as the singers described the plots of the opera selections they were singing. It was Spanish night, which meant lots of pieces from Bizet's Carmen (which is sung in French, but set in Spain) and shouts of "ole." The crowd on this evening is a mix of young arty types and opera buffs looking for the best deal in town. They seem like the typical noisy drinkers, until the arias started. Then they sat transfixed.

Greg Moogin loves opera and showed up to get the rare experience of hearing singers pick their own works and interpretations.

"It's a good reminder that opera is supposed to be entertaining and they achieve that," he says. "This would be a $300 ticket at the Metropolitan Opera, so it's nice to get in for the cost of a glass of wine."

The creative freedom offered to the singers is what draws then to perform at Opera on Tap. They aren't paid, and the company barely covers expenses when it passes the hat. But it does offer an audience and a way to practice new material.

Scott Reiburn is a baritone who always wanted to try a tenor piece. He warned the audience, "Hold onto your glasses because they might crack. And I might as well." Reiburn sings with a beer bottle in his hand, and often uses it as a prop.

"It smoothes out the edges, and everyone else is drinking, so I get right in there," he says.

On Spanish night, the show is far from perfect. When Jessica Miller playing the gypsy Carmen lets out a cough, an audience member yells out that the character needs to give up cigarettes. A blaring emergency vehicle made a guest appearance in an aria sung by David Gordon. But the singers handle the distractions with such grace and humor that it becomes part of the drama.

After two hours of opera and drinking though, the whole night take on an epic quality of its own. The story of young singers struggling to get noticed in a cruel artistic world. Even the bar itself is a tragic figure: Freddy's is slated for demolition under a plan to build a new basketball arena on the site.

Operas don't always have a happy ending. But as long as there is beer and a stage somewhere, the members of Opera on Tap say they'll find another place to sing.