Accessibility links
Ex-Beauty Queen Becomes FBI Agent, Chef The Miss Saigon pageant winner left Vietnam for the U.S. in 1975 and eventually became an FBI special agent. She has reinvented herself once again; she now lives in Bangkok and runs a Vietnamese restaurant that has become a favorite of locals and expatriates alike. 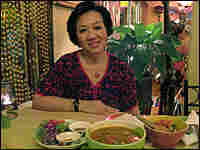 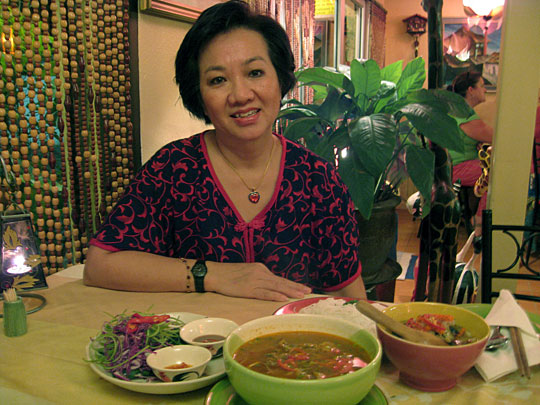 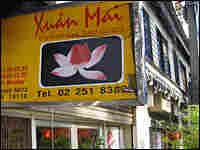 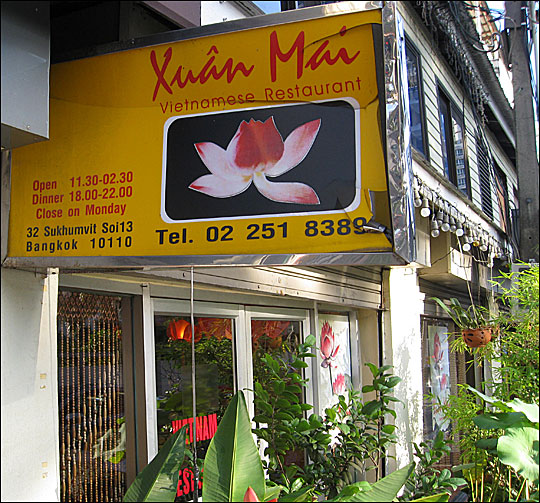 Living abroad has a special meaning for one Vietnamese refugee who came to America in 1975.

Meyung Robson carved out a successful career in law enforcement during her time in the United States after the Vietnam War. And now, she has transformed herself yet again. She has started a new career serving up the dishes of her childhood in another faraway land.

From Miss Saigon To The FBI

Former FBI agent Robson followed an unusual path to her law enforcement stint — including time as a beauty queen.

"I was Miss Saigon in 1970, and it was just like everything else in my life — pure luck," Robson says. "My teacher had come to tell me we have some beauty pageant in town: 'Why you not try it out?' And the next thing I knew, I was in the finals and crowned by the wife of the prime minister of South Vietnam at that time, Madame Tran Thien Khiem."

Robson's road from pageants to FBI special agent began on April 29, 1975, when her father retired as a three-star general and the Communists were closing in on Saigon.

"When we saw a helicopter falling off the rooftop of a condominium a block from our house, my mother said, 'That's it, we have to leave,'" Robson says. "So we just rushed out of the house with about $60 in my dad's pocket. [The] entire family just ran with clothes on our backs to the port of Saigon."

They scrambled onto a ship, and a few months later found themselves in New York as refugees picking strawberries in Stony Brook.

"It was just heaven, after spending so much time on sea, to be able to just lie down in field of strawberries and eat as much as we could, and sell the rest for 15 cents a basket. It was fun, it was really fun," Robson says.

But it wasn't so much fun in the winter. Her father, the former general, got work painting houses. And Robson started a work study program at the State University of New York at Stony Brook.

There, she met an FBI agent and volunteered to translate documents for the agency. She then decided to try to become a special agent herself.

"I was sick and tired of waiting for three and a half years, so every Monday I made a point of calling Washington, say 'what's going on with my application,' " Robson says. "Even wrote a letter to director William Sessions, you know, saying 'get me in or else,' and someone was bright enough to just take a leap of faith and allow me in, and that was it."

Robson became the FBI's first Vietnamese-American special agent, and in 1995 she began working closely with police from Vietnam to apprehend criminals neither country wanted — those who had committed crimes in the U.S., then fled back to Vietnam to hide.

She helped capture two people on the FBI's "Ten Most Wanted" list — a Vietnamese-American wanted for murder and a pedophile captured in Bangkok. Robson was posted in Bangkok in 1999 and retired there five years later.

Stepping Into Another Role

None of this, however, prepared her for her next career as a restaurant owner and chef. Robson never trained as a chef, but that, she says modestly, didn't really matter.

Bangkok may be a food lover's delight. But not, Robson says, when it comes to the city's Vietnamese restaurants.

"I would say they are not quite as authentic as another Vietnamese person would want," she says. "A lot of people asked me before I opened this restaurant, 'Where can I find the best Vietnamese food in Bangkok?' And I said, 'In my home.' And I meant it. I mean, if I can cook more authentic food, why would I want to go out and pay for it? It all comes down to the sauce — if you get it right, you've got it. They don't get it right."

At Xuan Mai, Robson and her three Thai assistants apparently do get it right, night after night, despite working out of a kitchen only a little bigger than a poker table.

The restaurant has become a favorite of Bangkok foodies, expatriates and Vietnamese visitors, too, who find Thai food too spicy, she says. Robson never cooked growing up, yet she claims to have the cooking equivalent of perfect pitch: total taste recall.

Robson's daughter is finishing a degree at Penn State, and her son will graduate high school in Bangkok next year. Robson says she'll stay on in Bangkok. She is in no hurry, she says, to go back to the states or to Vietnam.

"Having lost your country makes you very adaptable to wherever you go," Robson says. "Home is where your heart is, and my home is here right now. I'm totally happy."