Accessibility links
University Uses 'Social Norming' To Curb Drinking The number of alcohol-related deaths is on the rise at colleges nationwide. But at the University of Virginia in Charlottesville, no student has died from intoxication or an accident linked to drinking since 1998. The school's prevention program relies on peer health educators and honesty about the effects of alcohol. 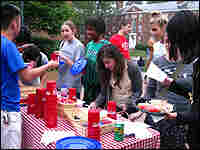 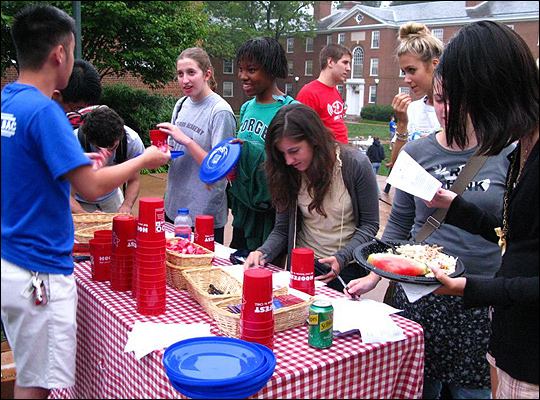 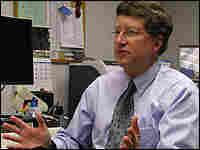 Dr. James Turner is director of the Elson Student Health Center at UVA. He says he doesn't endorse underage drinking, but he believes you can educate young people to drink responsibly. Doualy Xaykaothao/NPR hide caption 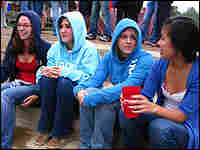 Students at this alcohol-free event had the option to play a game — when asked, participants tended to underestimate how many beers fit into these red plastic cups. Doualy Xaykaothao/NPR hide caption 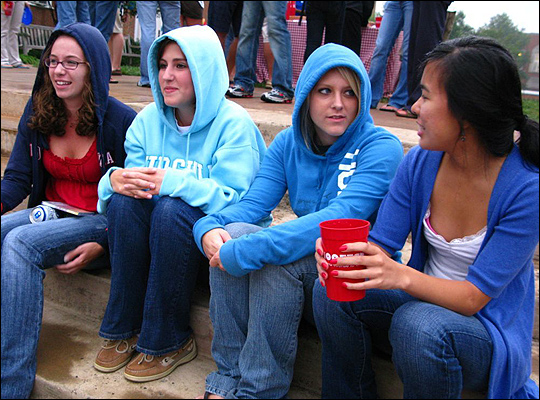 Students at this alcohol-free event had the option to play a game — when asked, participants tended to underestimate how many beers fit into these red plastic cups.

At colleges across the United States, the number of alcohol-related deaths is on the rise. But at the University of Virginia in Charlottesville, no student has died from intoxication or an accident linked to drinking since 1998.

What's UVA's secret? It's called "social norming," and it relies on peer counseling, social events and solid information to challenge misperceptions students have about drinking.

Robert Waynefield, now a UVA graduate student, says that when he first arrived on campus at age 18, he figured he had to drink if he wanted to fit in, even though the legal drinking age is 21.

"It's just something you are constantly presented with in all of your group of friends," says Waynefield. "You may be lucky enough to find a group of people that don't drink, but you will be like an island amongst the drinkers if you're the only people not drinking."

Like most colleges, UVA bans alcohol on campus and in the dorms, but Dr. Jim Turner, director of student health, says it's virtually impossible to keep alcohol away from underage students.

"We have 20,000 students here; 12,000 of them don't even live on our campus," says Turner. "So unless you are going to put a policeman at the front door of every single apartment, fraternity and sorority, how on earth can you keep young people from using alcohol in the privacy of their own home?"

The university's prevention program, developed over the past decade, targets high-risk behavior, particularly among first-year students. The hallmark of social norming is correcting student ideas about what other students really do, and how much they actually drink.

"Perceptions of what your peers do are very, very powerful motivating factors. And misperceptions can be just as powerful," Turner says.

Truth-Telling — The Power Of Facts

A recent survey found that 27 out of 100 UVA students don't drink at all. One-third of UVA students are considered moderate drinkers — people who have one to three drinks at the most in an evening, and not every evening. One-fifth have serious problems with alcohol.

The university wants students to understand what happens when they drink, so as soon as first-year students get to campus in the fall, the university hosts "HooFest," an alcohol-free outdoor festival. ("Hoos" are what UVA students call themselves.)

This year, the fifth annual HooFest took place on a rainy day and lured several hundred students with food, music and games.

One game was designed to teach students how to keep track of how much they're drinking. Students challenged Turner to pour the amount of liquid he thought was equal to one bottle of beer into a giant plastic cup, the sort ubiquitous at college keg parties. He did fine, but many students don't: Those cups each contain 16 ounces — a bottle-and-a-half of beer.

Peers Educate, Rather Than Police

"I think students expect that we are going to tell them not to drink, but we are actually just accepting the reality that a lot of college students do drink under the age of 21. And they do it in unsafe settings because they have to hide it," says Villageliu.

"So we just want them to have better information and know that they can come to talk to us if they have concerns about drinking too much or friends drinking too much," she says. "They are just wondering about their general safety and BAC."

HooFest seems like a long time ago for Waynefield, who is now 21. When the graduate student talks about the drunken binges of his college years, he sounds like a man waking up from a four-year hangover. He's not proud of what he did when bingeing.

"Getting into fights with people when you've had too much. Uh, vomiting in public. Public urination. Unprotected sex. The whole nine yards of just horror," Waynefield says.

Last semester, he volunteered to work on a project at UVA's Center for Alcohol and Substance Education. It was a way to use his data analysis skills and confront his personal demons. He's now part of a student group trying to lessen the impact of drinking during big occasions such as football games and Halloween. The goal, he says, is to protect students from themselves.

"They have a lot of things in place to get you home safely so that you don't drunk drive," Waynefield says. "They have officers stationed and rescue squads stationed and everything ready to go in case something bad happens."

The really big event is the "Foxfield Races" in the spring. The students dress up, and drinking starts early in the day. That's when 21-year-old Matthew White, another member of the Center for Alcohol and Substance Education, got his wake-up call.

"I had a fraternity brother, we were pledging my fraternity; and the first year of college, he ended up in a coma with BAC of 0.41, I think. It was just a big reality check," White says.

The friend survived because of one lesson that's drilled into students:

"A lot of students at UVA know some of the key signs for alcohol poisoning, and I don't think anybody's afraid to call 911 in case of an emergency," White says.

In fact, a recent student survey shows emergency room visits are up, though not for situations like the one White confronted. Most visits mainly concern minor scrapes and falls associated with drinking.

Reaching Students Any Way, And Anywhere

Another communication tool students use to reach their peers is the "Stall Seat Journal," a funny, educational poster plastered in a place no one can avoid: inside bathroom stalls. The posters change often and cover everything from relationships to facts about the college to statistics that dispel myths about alcohol.

"One of the statistics used to be something like, 90 percent of first-years don't drink and drive. I remember when I was first-year, we used to say the other 10 percent are the ones that have cars," White says.

But the UVA survey showed that the number of students who say they have driven while intoxicated has dropped by more than half since the prevention and education program started.

Some other schools rely on programs that focus on rules and enforcement — clamping down on fraternities that serve alcohol, and closing local bars that promote drinking among students. Turner, the health director, fears such policies just push students away.

"I do believe you can educate young people, so if they are around alcohol and they choose to use, they can do so in a more responsible way and minimize the risk of being hurt by it," Turner says.

While he doesn't endorse underage drinking, Turner says UVA's program keeps students alive and helps them reach a point in their lives when they won't abuse alcohol.

We said, "[A]t the University of Virginia in Charlottesville, no student has died from intoxication or an accident linked to drinking since 1998." In fact, one student died in the Charlottesville area on March 10, 2002, after a traffic accident in which local police say both speed and alcohol were involved.