Accessibility links
Al Bara And Serjilla: A Taste of Syria's 'Dead Cities' An hour southwest of the northern Syrian city of Aleppo, eerily beautiful and strange ruins appear in the midst of sprawling olive groves. They're remarkable remnants of Byzantine farming villages that flourished in the 4th and 5th centuries.

Al Bara And Serjilla: A Taste of Syria's 'Dead Cities'

Al Bara And Serjilla: A Taste of Syria's 'Dead Cities' 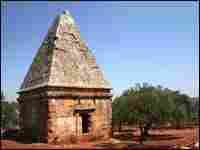 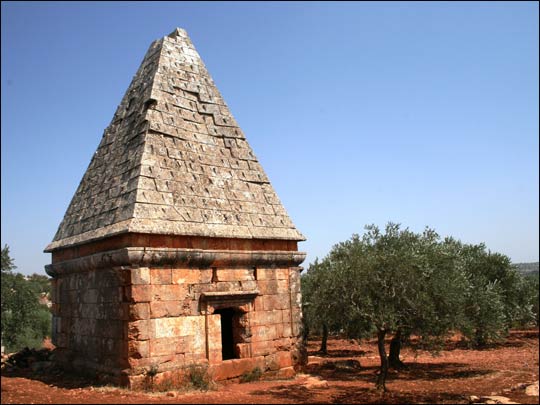 The inside of a burial chamber at Al Bara. Eric Westervelt/NPR hide caption 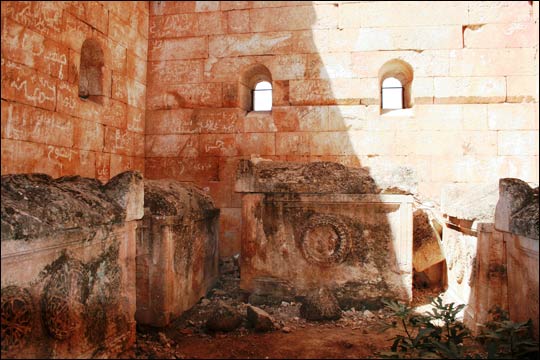 The inside of a burial chamber at Al Bara. 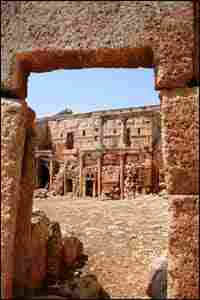 Remnants of a doorway poke through the underbrush at Al Bara, where some of the ruins are slowly getting swallowed up by the earth. Eric Westervelt/NPR hide caption 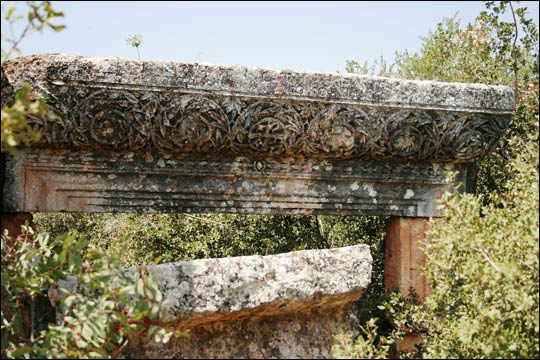 Remnants of a doorway poke through the underbrush at Al Bara, where some of the ruins are slowly getting swallowed up by the earth.

An hour southwest of the northern Syrian city of Aleppo, eerily beautiful and strange ruins appear in the midst of sprawling olive groves. They're remarkable remnants of Byzantine farming villages that flourished in the 4th and 5th centuries.

Although they are ruins, the "dead cities," as they're often called, are not piles of rock or relics that require you to stretch your imagination. Many are remarkably intact.

In some areas, pomegranate and fig trees grow in and around the buildings. Some of the villages have a ghostlike quality, as if they were abruptly abandoned and then slowly crumbled into the landscape.

A fully intact pyramidal burial chamber stands near remnants of a 5th century church. Much of the church's rectangular stone slab walls are still intact. There are also ruins of convents, homes, a men's meeting place — known as andron — as well as buildings once used to store and process wheat and olives.

These villages once formed a major agricultural engine for the region, providing wheat, olives, olive oil, grapes and wine for the ancient population centers of Antioch and Apamea. Historians and archaeologists call these distinctive ruins a major, if unheralded, addition to our knowledge of the late Roman classical period when the Byzantine Empire was near its peak of power. These structures weren't built as monuments to grandeur or kings. But the villages today do offer a unique window to prosperous, yet relatively humble, workaday villages.

"It's the only complete agrarian region that's been left for us from antiquity," says Nasser Rabbat, the Aga Khan professor of Islamic architecture and history at MIT, who has written about the villages.

"We know there were other growing regions in North Africa and Italy, but there are no traces left of them. This is the only complete region. We can know exactly what they were growing and their social and architectural structures," he says.

A Place Of Pilgrimage

From the late 4th century through the 5th century, the area became a key pilgrimage site for Christians. They would visit the tombs and shrines of early Christian figures, the most famous being the 4th century theologian Saint John Chrysostom, who had lived and died in the area. Chrysostom lived in one of the villages south of Antioch.

These were distinctive communities. Elsewhere during late antiquity, most of the wealthy farm areas largely consisted of absentee landowners and their nearby cities often dominated by imposing architectural projects. That is not the case with the dead cities. There are no majestic monuments or grand villas here. Excavations show that the farmers here mainly grew what they needed to live and exported surplus to nearby cities, Rabbat says.

He sees an almost egalitarian impulse in the architecture's simplicity.

"Call it romantic; call it a utopian view," he says. "There are no palaces here. And it's all there for archaeologists and students to understand and reconstruct."

The two remarkable pyramidal tombs at Al Bara — one of which holds several sealed sarcophagi — are the only contrasts to the otherwise humble character of these villages.

A team of Spanish Franciscan excavators and archaeologists has identified the remains of some 800 villages in the area, spread out over dozens of miles. You could spend weeks exploring them. But a few hours tramping around the sublime ruins of Al Bara and Serjilla — just a few kilometers apart — are enough to give you a taste of what the villages have to offer. The sprawling ruins of Al Bara cover more than 6 kilometers and include remains of a half-dozen churches and several monasteries.

Guide-book authors write hauntingly about the enduring "mystery" of why the villages were abandoned. There is some disagreement among scholars as to why and how quickly the area slipped into oblivion. But there's no big mystery.

Even the romanticized name "dead cities," given by an 18th century French adventurer and explorer, is inaccurate. Archaeologists and historians now agree that they were not cities, nor did they ever really die. The term "forgotten villages" is preferred.

It's believed the villages slowly drifted into oblivion, the victims of changes in climate, trade and migration patterns and the influx of Islam. Rabbat says these villages were, in some ways, caught between Islam and the West. They became a contentious boundary area between Christian Byzantium and the emerging Islamic empire.

Battles in The Region

As the Islamic Umayyad dynasty expanded in the early 7th century, the villages' region became known for tit-for-tat seasonal invasion.

"One season the Byzantines could come in, and in the next season the Umayyads would attack. It was almost like annual training exercises," Rabbat says.

Byzantine farmers and their families were caught in the middle. The majority likely were forced — or chose — to eventually migrate back to Byzantium proper. The villages slowly dwindled in size and importance. Drought and rising temperatures, it is believed, made the once-fertile area undesirable.

"Maybe that's why we have complete houses still standing," Rabbat says. "People left, and there was just no attraction anymore to come to the area."

An outbreak of bubonic plague in 542, called the "Justinian Plague" after the Byzantine emperor, certainly contributed to the area's declining fortunes. Today at Al Bara, a hand-painted and grammatically challenged sign asserts that the villages were abandoned after a giant earthquake. In fact, several experts believe the exact opposite is true — that the area actually hit its peak soon after an earthquake in 555. Historians believe an influx of post-earthquake imperial money revitalized the area and reintegrated the region during Justinian's ambitious yet doomed "restoration of the empire" policy.

Today, the villages are relatively unknown and unvisited. The only other visitors I saw during my trip were a German backpacker and a French family — and this was during the peak summer vacation time.

But that is changing quickly. Like the spectacularly intact Syrian castle Krak des Chevaliers — the best preserved Crusader castle in the world — and the enchanting ruins of the Roman city of Palmyra, Syria is now realizing the potential draw of the dead cities for tourists and Christian pilgrims.

Near Serjilla, a new restaurant has just opened to accommodate tour buses, and there's talk of building a hotel nearby. If Syrian officials don't expand tourist facilities with care, they risk undermining the dead cities' most striking feature: the enchanting, eerie emptiness of this outdoor museum.

A visit to the dead cities is not for everyone. At Al Barra, in particular, you'll have to make your way around some fallen walls and rock piles, and through some underbrush. Be careful. Small children, the elderly and people with disabilities may have trouble accessing some areas.

If you visit, bring plenty of water and pack a lunch. The people in the ramshackle villages around the ruins are friendly, and there are a few restaurants in town. But in general, the area offers few choices for food or accommodations. For the journey, you can hire a taxi or car service from any reputable hotel in Aleppo or Damascus, or rent a car.

Serjilla and Al Bara are two of a group of five dead cities that lie an hour south of Aleppo, along a country lane several kilometers off the Aleppo-Hama highway. Al Bara is about 6 kilometers from the town of Kafr Nabl. Visitors can take microbuses or taxis from Aleppo. A guard charges visitors a nominal fee (about 50 cents) to enter the ruins at Serjilla.