Accessibility links
In Turkey, Mosque Gets A Woman's Touch Artist and interior designer Zeynep Fadillioglu, who has specialized in high-end establishments, hopes to put a contemporary spin on religious art from the Ottoman era.

Listen
In Turkey, Mosque Gets A Woman's Touch 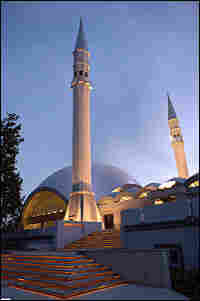 The wealthy Sakir family commissioned the Sakirin Mosque, the first in Turkey to be designed by women. Benno Thoma/ZF Design hide caption 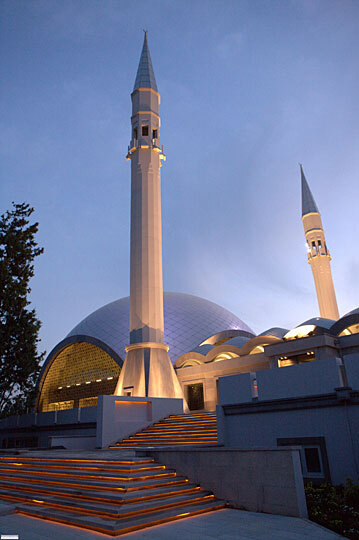 The wealthy Sakir family commissioned the Sakirin Mosque, the first in Turkey to be designed by women. 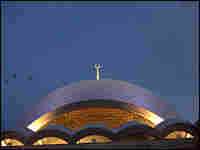 The Sakirin Mosque's dome is 130 feet in diameter, coated in aluminum composite. The facades are decorated with a combination of glass and wrought-iron grills. Benno Thoma/ZF Design hide caption 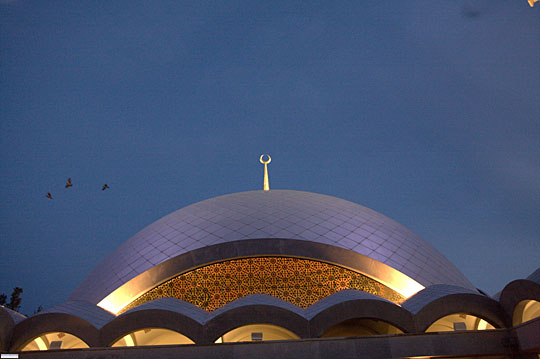 The Sakirin Mosque's dome is 130 feet in diameter, coated in aluminum composite. The facades are decorated with a combination of glass and wrought-iron grills.

The role of women in Islam is an issue that's been furiously debated, especially in Turkey — an overwhelmingly Muslim country with a strict secular constitution.

The governing pro-Islamic political party was almost banned this year after it tried to allow women who wear Islamic head scarves to study at universities.

In the midst of this controversy, several Muslim women who do not wear head scarves have quietly reached a new milestone — these artists are helping build a mosque.

For centuries, Istanbul was the seat of the caliphate, the capital of the Islamic world and home to hundreds of magnificent old mosques. Now this city of countless domes and minarets is about to get a unique new addition.

Zeynep Fadillioglu is one member of a team of interior designers and architects overseeing the construction of the Sakirin Mosque. It is Fadillioglu's first mosque.

"I think I don't know of any other person — a woman — who has designed a mosque before," she says.

Tall and fashionably dressed, with long blond hair, Fadillioglu is better known in Turkey as a figure from the country's cocktail-sipping jet set. She made a career decorating restaurants, boutique hotels and homes for the very wealthy.

A Contemporary Spin On Ancient Art

In the mosque, Fadillioglu is putting a contemporary spin on religious art from the Ottoman era.

The iron on the mosque's enormous iron and glass facade was hand-crafted by specialists in Istanbul, Fadillioglu says. "The glass etching has got different layers of gilding on it, which is from verses of the Koran," she says. "We wanted people to feel more left alone with God in this place, rather then being distracted by too much ornamentation. I think that makes it more contemporary at the same time"

Fadillioglu also brought in other female artists to help her on the project.

On one particular day, beneath the mosque's 130-foot diameter dome, Nahide Buyukkaymakci instructs a worker on how to hang dozens of blown-glass rain drops from an asymmetrical bronze and Plexiglas chandelier.

The glass drops are inspired by a prayer that says Allah's light should fall on you like rain, Buyukkaymakci explains.

"Even though I'm not really a practicing Muslim, this is a very special project for me, because it's the first mosque to be designed by women," she says.

"Traditionally, the mosque is thought to be a place for men only," Kose says. But he says women played a much greater public role in mosques in the days of the Prophet Muhammad. That role, he says, deteriorated over time.

"Islamic societies, by time, have become male dominant societies," Kose says, "and this affected every part of life, and also affected the religion as well."

'More Room For Us To Pray'

Istanbul's Mihrimah Sultan Mosque was built in 1547 in honor of a daughter of the sultan. Muslim women are allowed to attend prayers here in specially designated women's sections.

They are ushered with their children to a small, curtained-off area in the back of the mosque, while the men kneel in front on a vast carpet enjoying an unobstructed view of the mosque's beautiful stained glass windows.

After prayers, a woman named Deniz Urash and her mother complain that the women's section is too small and crowded.

"It would be nice if they made more room for us to pray," Urash says.

Fadillioglu says in many Turkish mosques, the women's sections have suffered from neglect.

"I have been to some mosques of that sort, and that disturbed me," Fadillioglu says. "So, I prefer the women to use the mosque as much as the man if they want to, of course, and the same way."

As workmen paint and sand this new place of worship, Fadillioglu vows to make the second-floor balcony — where the women will one day pray — every bit as beautiful as the men's part of the mosque.