Accessibility links
Indie Video Game Developers Have Room To Play As developers become increasingly frustrated with the big gaming industry, they are moving to smaller companies where they have more creative freedom. The result? New titles such as: Mushroom Men, Hail to the Chimp and Ninja Reflex. 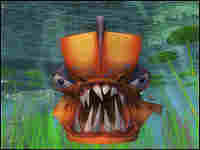 The inspiration for Sanzaru's Piranha came from the company's creative director, Tin Guerrero, who is originally from Peru. Guerrero was inspired to make a game set in Amazonian waters; a demo was completed in just seven weeks. Sanzaru hide caption 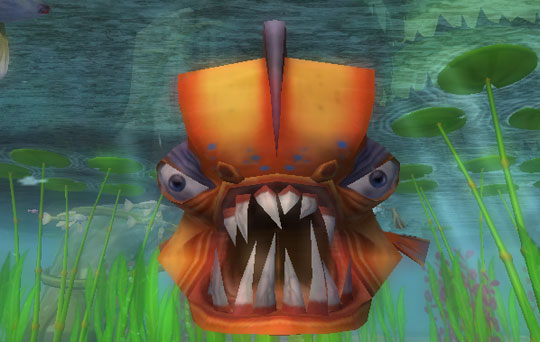 The inspiration for Sanzaru's Piranha came from the company's creative director, Tin Guerrero, who is originally from Peru. Guerrero was inspired to make a game set in Amazonian waters; a demo was completed in just seven weeks. 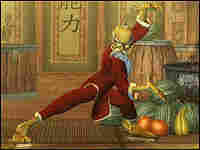 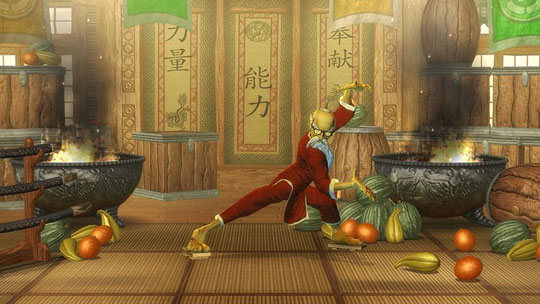 In Sanzaru's Ninja Reflex, players work toward their black belts by honing hand-eye coordination skills — snatching koi out of a pond and battling samurai warriors.

In 1986, Spike Lee broke into the movie business with She's Gotta Have It — an independent film made outside of the major studios on maxed-out credit cards. The movie helped define a new era in independent filmmaking.

Now, a similar moment may be approaching in the gaming world; as developers become increasingly frustrated with the big gaming industry, smaller companies have etched out a niche by encouraging employees to be creative.

'We Have The Flexibility'

Sanzaru Games was founded in 2007 by seven developers who previously worked at Activision, one of the largest video game publishers and developers. Now, all 25 Sanzaru employees are squeezed into one big room in an office park in Silicon Valley.

Glen Egan, one of the company's founders, prefers being in Sanzaru's smaller workplace to the days when he was just one of thousands of employees in Activision's plush offices. He says that in the two years he's been running Sanzaru, he has enjoyed more creative freedom.

"We have an idea for a feature. I go talk to a couple guys in here at their desk and — bang — the feature's done," Egan says.

The demo for Piranha, one of Sanzaru's games currently in development, was pulled together in just seven weeks. The inspiration for the game came from Tin Guerrero, Sanzaru's creative director, who is originally from Peru.

Guerrero liked the idea of a game that took place in the Amazonian waters. He says his idea would likely have died at a big game company where everything has to fit into marketing research about successful game genres.

"We have the flexibility as an independent to kind of explore our own creative thoughts and go for it," Guerrero says. "Whether it's successful or not is another thing."

The next step for Sanzaru is to find a publisher for the game to do the business side — everything from packaging, to marketing, to distribution. Mike Wilson is CEO of Gamecock, a company that specializes in publishing independent games.

Wilson says that in the early days of the industry, there were mostly small companies filled with people who loved gaming. Back then, games were cheaper to make. Now, it can cost upwards of $50 million to develop one.

"Most entertainment industries now are run by people who have very little affinity for ... what they actually are building," Wilson says. "It's people that play golf, not video games."

Wilson says he wants to help foster the creativity of game makers, because publishers shouldn't "manage them to death."

"We've been able to sort of say, 'OK, we'll be the good guy publishers, the white knight publishers,' and we'll ... give them creative freedom," Wilson explains. "Unfortunately, that's such an unusual thing in our business, that's it's a kind of a niche for us."

Not Just For Kids

Wilson says now — just like in the movie studios — many of the big companies are more comfortable making sequels to popular games. Wilson's two-year-old company is willing to take a chance on ideas that are often a little quirky.

Case in point: Mushroom Men. Gamecock is about to release a game that revolves around fungus trying to take over the Earth from humans; the player is a 3-inch mushroom. Gamecock also released Hail to the Chimp this summer — a political satire game in which chimps and other animals compete for political power.

In the world of independent games, serious topics such as politics can being taken on in creative ways. Tracy Fullerton, a professor of interactive media at the University of Southern California, cites past titles such as Darfur is Dying, which was meant to increase awareness of the genocide there.

Fullerton believes the quantity and quality of independent games is growing. She says it's being fed by colleges and universities that now offer degrees in game design. There is also a generation of adults who grew up playing video games and are looking for more than kids' stuff.