Accessibility links
Rachael Yamagata Writes To Overcome The singer-songwriter's newest project is a double album focusing on two different parts of her personality. Elephants is contemplative, while Teeth Sinking Into Heart is upbeat, rhythmic and fun.

Rachael Yamagata's unique sound is getting noticed: The singer-songwriter has opened for big names like Coldplay and Liz Phair, and she's won over a small army of critics and fans. Yamagata took over NPR's Studio 4A to perform and discuss her music and her personal journey, as well as what she wants listeners to take away from her songs. Along with her bandmates — Jason Kanakis on guitar and Johnny Flaughers on upright bass — she sang a number of tunes from her new double album, Elephants and Teeth Sinking Into Heart.

A lot of the songs on the album deal with Yamagata's own struggles through emotionally draining personal relationships, as well as her connections to nature and the world around her. Her music can provide the ultimate catharsis: Yamagata says she's able to say things in lyrics that she's not always comfortable speaking in conversation.

While Elephants has a more reflective feel to it, Teeth Sinking Into Heart is more uptempo and danceable. The duality of the album reflects a lot of the dualities in Yamagata's own life. Her mother is German-Italian and her father is third-generation Japanese. She used to play in the Chicago funk band Bumpus, but she grew up loving Carole King and James Taylor. Yamagata also plays a number of instruments: On her song "Elephants," she shows off her piano skills, but she moves to guitar for "Faster." 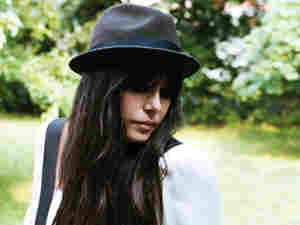 A vibrant 30-year-old singer and pianist, Rachael Yamagata has evolved quite a bit since her days as a vocalist for the funk band Bumpus, for which she recorded three albums. After launching a solo career in 2001, Yamagata found her voice as a smart, powerful chronicler of love's dark underbelly. Click the link above to hear Yamagata perform live in concert from WXPN and World Café Live in Philadelphia.

Next month, Yamagata will release a two-part album called Elephants... Teeth Sinking Into Heart, a compelling combination of soft vulnerability and gritty skepticism. With edgier guitars added to the mix, the disc sounds seamless and lush, with tender confessionals that sting as they soothe.