Accessibility links
Waco Brothers: Where Punk And Country Collide : World Cafe The Waco Brothers, a punk-influenced alt-country band from Chicago made up of mostly British musicians, is best known for their chaotic live performances. The band brings that chaos to the World Cafe studios to perform songs included in their latest CD, Waco Express: Live & Kickin' at Schuba's Tavern . 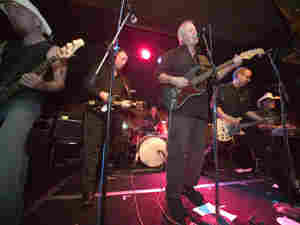 The Waco Brothers. Courtesy of the artist hide caption

In a session with David Dye, The Waco Brothers' members play songs from their latest album, Waco Express: The Waco Brothers Live and Kickin' at Schubas Tavern. The album captures the rollicking mayhem of their performances, which are driven by spontaneous energy that helps annihilate the barrier between performer and observer.