Accessibility links
Ramirez Heirs Seek To Reclaim Artist's Lost Work Martin Ramirez was a Mexican immigrant who spent more than 30 years in California psychiatric hospitals. At the time, much of his work was thrown away, but today, he is hailed as one of the giants of 20th century art. 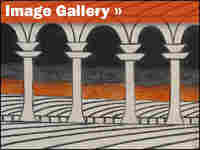 See Some Of Martin Ramirez's Last Works Of Art. 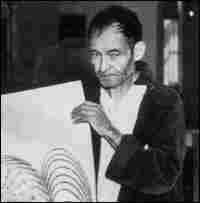 Martin Ramirez spent more than 30 years in California psychiatric hospitals. He is pictured above at DeWitt State Hospital in Auburn, Calif., around 1950. hide caption 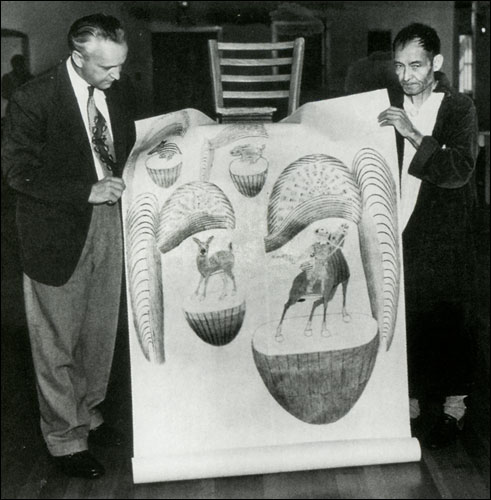 Martin Ramirez (right) was a Mexican immigrant who spent more than 30 years in California psychiatric hospitals. His pencil and crayon drawings now sell for six figures. He is pictured above in the 1950s with psychologist and artist Tarmo Pasto at DeWitt State Hospital. 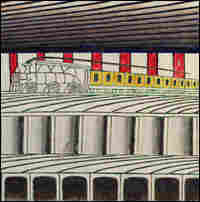 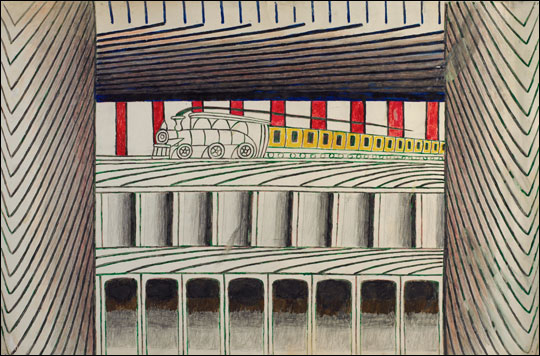 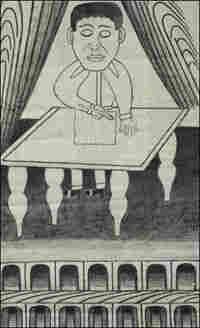 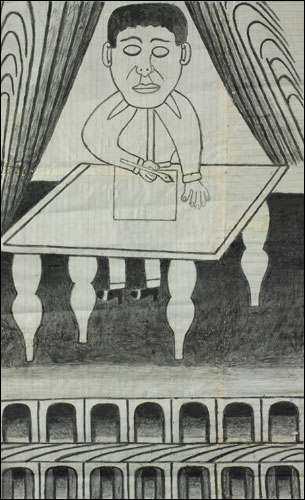 When Martin Ramirez, a Mexican immigrant who spent more than 30 years in California psychiatric hospitals, was making art, few people saw any value in it.

But today, more than 40 years after his death, Ramirez has been hailed as one of the greatest artists of the 20th century. His colored drawings and paintings are treasured by museums — and his heirs are taking legal action to recover some of the valuable pieces that are in private hands.

Creating Art On The Inside

The story begins in 1925, when Ramirez, who was 30 at the time, left a pregnant wife and three children in Mexico to find work in California. By 1931, Ramirez had joined thousands of other people on the streets of Northern California, victims of the Great Depression.

Ramirez spoke no English. His inability to communicate, combined with the government's need to do something with all of the homeless, may have resulted in his institutionalization. In 1948, Ramirez wound up at DeWitt State Hospital in Auburn, Calif., housed on a tuberculosis ward.

At DeWitt, Ramirez created pictures of men riding horses, religious figures, trains coming out of tunnels and landscapes incorporating rhythmic lines. Some of the drawings were done on sheets of examining table paper that were 8 feet long.

Ramirez used subdued reds, yellows and blues. He made his own paint by grinding up crayons and colored pencils, and mixing them with his own spit in a little pot.

James Durfee, who worked as a psychiatric nurse at the hospital, remembers Ramirez as a frail man. Now 79 years old, Durfee says Ramirez's art was dismissed by most of the staff.

"Many of his paintings ended in the garbage cans," Durfee says. "None of us saw the value of the paintings. And remember, this was a TB ward — tuberculosis — and he used a lot of sputum in his paintings. Most people did not want to touch them."

One man who had no reluctance to handle Ramirez's art was Tarmo Pasto, a psychology professor at a nearby college. Between 1948 and 1963, when Ramirez died, Pasto collected some 300 of the patient's creations.

"I was just really flabbergasted," Hammond recalls. "I thought, 'My God this is really not the work of somebody who is schizophrenic like the other work I have ... [it's] genuinely simplistic and beautiful and linear and so non-psychotic' — for want of a better word."

Hammond is retired now and was planning to auction 17 Ramirez artworks at Sotheby's. But the auction house called off the sale when two of Ramirez's grandchildren objected; the family has hired lawyers and formed an estate.

Hammond's lawyer, Rick Richmond, questions why the family waited so long to lay a claim to the work, when they've known about Ramirez's art for 60 years; he says the family didn't save any of the paintings that they had.

"They did nothing to preserve them," Richmond says. "And when people sleep on their rights, the law says that if you wait too long, the burden's on you. The burden is not on the other person who's had the property all those years."

Was Martin Ramirez mentally competent enough to know that he was giving his paintings away? Eric Lieberman, one of the family's lawyers, doesn't think so.

"The superior court in Northern California made a determination that Martin Ramirez should be involuntarily committed as insane," says Lieberman. "Upon such determination, a presumption arises that he was incompetent to engage in any such transactions. That diagnosis never changed."

The psychologist who is credited with bringing Ramirez to the world's attention — Tarmo Pasto — passed away in 1986. But in the 1970s, Pasto presented a paper that declared Ramirez was not mentally ill.

One of the leading Ramirez scholars, Victor Espinosa, adds that California's psychiatric hospitals during the Great Depression were sometimes used as homeless shelters.

"Many of the people who were inside those hospitals were not really mentally ill," Espinosa says.

Lawyers for the Ramirez estate are hopeful that Maureen Hammond will settle — as did the owner of several dozen recently discovered Ramirez paintings currently on display at the American Folk Art Museum and the Ricco/Maresca gallery in New York.

A representative of the Ricco/Maresca gallery says these works are the only ones by Ramirez currently on the market — the prices range from $50,000 to upwards of $300,000.

Ramirez At The Ricco/Maresca Gallery