Accessibility links
Obama Rebuts Criticism Of His Tax Plan Democratic presidential hopeful Barack Obama made his case to voters Wednesday in the battleground state of Virginia. He brushed off rival John McCain's accusations that his tax plan amounts to socialism. It was his last full day of campaigning before taking time out to head to Hawaii to visit his ailing grandmother.

Democratic presidential hopeful Barack Obama made his case to voters Wednesday in the battleground state of Virginia. He brushed off rival John McCain's accusations that his tax plan amounts to socialism. It was his last full day of campaigning before taking time out to head to Hawaii to visit his ailing grandmother.

Democratic candidate Barack Obama spent much of his day responding to the criticisms from the Republican ticket. Obama made his case to voters in rallies in the battleground state of Virginia. It was his last full day of campaigning before taking time out to head to Hawaii this afternoon to visit his sick grandmother. NPR's Audie Cornish reports.

AUDIE CORNISH: The Democratic nominee drew some 35,000 people to an evening rally in Leesburg, Virginia. The city's in that voter-rich and Democratic-leaning section of the state that's often considered suburban Washington, D.C. A McCain campaign spokeswoman recently dismissed the area as not real Virginia. Voter and Loudoun County firefighter Karrie Boswell very much disagrees.

Ms. KARRIE BOSWELL (Firefighter, Loudoun County, Virginia): Yeah, it is - it is real America. That's what I think. Yeah, this is it. This is what - you look at the trends and what's happening and what people's expectations are of their candidates. Yeah, I think it is a true snapshot of what's going on in this country.

CORNISH: And Senator Barack Obama swooped in to the battleground state to take advantage of the perceived misstep.

Senator BARACK OBAMA (Democrat, Illinois; Democratic Presidential Candidate): On this beautiful fall day, it is good to be back in Virginia.

Senator OBAMA: I know some folks may not think so, but this looks like the real Virginia to me.

CORNISH: John McCain may be embracing the role of underdog, but Barack Obama says he's too superstitious to embrace frontrunner status. The Democratic nominee warns voters at every turn of Republican attacks.

Senator OBAMA: We've seen it before, and we're seeing it right now. The ugly phone calls, the misleading mail and TV ads, the careless, outrageous comments, the constant negativity, all aimed at keeping us from working together, all aimed at stopping change.

CORNISH: And then, point by point, he takes them on. For instance, in response to Governor Sarah Palin's comments about so-called pro-American areas of the country, Obama says...

Senator OBAMA: There are no real or fake parts of this country.

Senator OBAMA: We're not separated by the pro-America and anti-America parts of this country.

Senator OBAMA: We all love this country no matter where we live or where we come from.

Senator OBAMA: John McCain has called my tax plans socialistic. That's what he said. And here's the irony. Back in 2000, back in 2000 John McCain himself opposed the Bush tax cuts on the very wealthiest.

CORNISH: The senator even manages to throw in a rebuttal to the McCain camp's favorite voter, Joe the Plumber.

Senator OBAMA: All I want to do is give Joe a tax cut.

CORNISH: Senator Obama does work in some key domestic policy points in between the digs. The Democrat reiterates his call for a federal economic stimulus package for families. He proposes a tax credit for each new employee a company hires on American soil over the next two years. And Obama promises a three-month moratorium on home foreclosures, and more. But will it be enough for the undecided voters like Leesburg town administrator Scott Parker?

CORNISH: Which may be why Virginia is still very much a tossup state. Audie Cornish, NPR News, traveling with the Obama campaign.

MONTAGNE: Here's something the candidates rarely mention but that's apparent every day. One of the major party nominees is black. Win or lose, Barack Obama has sparked widespread conversation about race, which we're sampling at NPR News.

(Soundbite of interview with voters in York, Pennsylvania)

Unidentified Man #1: When you talk about a Barack Obama who they show you these pictures of his family and who he grew up with, what it's basically saying to the American people is, don't worry. You don't have to worry about him doing these things that you might think he might do that comes from this African-American culture.

MONTAGNE: And then there's the voter that Republican Sarah Palin has described.

INSKEEP: When you hear the phrase Joe Six-pack, who is that? Who do you imagine?

Unidentified Woman: When I hear Joe Six-pack, I think of the hunter and his gun. And that's a definite white man out in the countryside.

INSKEEP: I'll join Michele Norris of NPR's All Things Considered and a roomful of voters in York, Pennsylvania, and we will dissect race in this election tomorrow morning and afternoon. It's Morning Edition from NPR News.

Candidates Strongly Differ on How to Tax the Rich

Candidates Strongly Differ on How to Tax the Rich

Read more about how McCain and Obama's tax plans stack up against each other. hide caption

Read more about how McCain and Obama's tax plans stack up against each other. 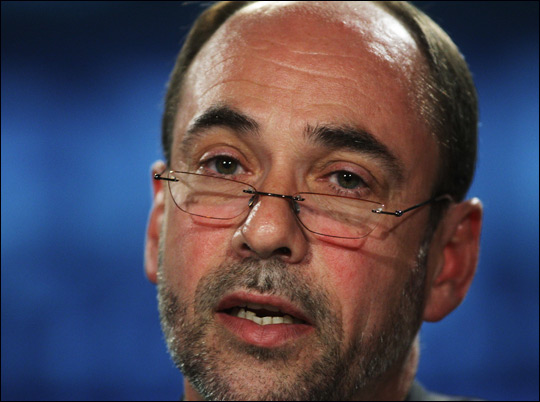 Douglas Holtz-Eakin, seen here in a 2007 file photo, is an economic policy adviser to John McCain.

McCain: He is advised by a team of business people and academics, including Douglas Holtz-Eakin, an unpaid adviser and the former head of the Congressional Budget Office; Carly Fiorina, the former CEO of Hewlett-Packard; Phil Gramm, a former Texas senator and economics professor at Texas A&M University; and Meg Whitman, the campaign finance co-chair and former CEO of eBay.

Obama: His chief economic adviser is Austan Goolsbee, a University of Chicago economist. Jason Furman is his economic policy director. Furman worked for former Democratic presidential candidate and Massachusetts Sen. John Kerry. He previously headed The Hamilton Project at the Brookings Institution, founded by Robert Rubin, the former secretary of the Treasury. 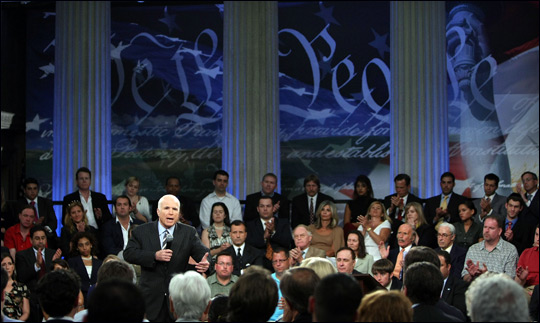 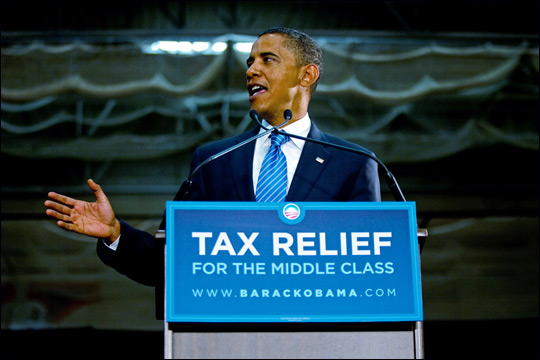 Obama speaks at a town hall meeting at Kaukauna High School in Wisconsin on Thursday.

On the campaign trail this week, Illinois Sen. Barack Obama and Arizona Sen. John McCain have focused on the economy, including their tax proposals.

According to an independent analysis of their plans by the Tax Policy Center in Washington, both would cut taxes overall. The analysis concludes that McCain's tax cuts would primarily go to high-income Americans, while Obama's would favor low- and middle-income households.

A big chunk of the tax-cutting done by both McCain and Obama would result from simply continuing President Bush's big tax cuts — which would otherwise expire at the end of 2010. McCain would extend them for everyone. Obama would extend them only for households making less than $250,000 a year.

If you're among the richest Americans, the top one-tenth of 1 percent, the difference between McCain or Obama in the White House could be stark. Len Burman, director of the nonpartisan Tax Policy Center, says that under McCain, those rich taxpayers would, on average, get a $270,000 tax cut from McCain, but with Obama in the White House, they'd face a $700,000 increase in their tax bill. So if you're rich, you could see nearly a million-dollar swing in your tax bill, depending on who wins the election.

Burman says a big share of McCain's tax cuts for the wealthy come from his proposal to cut corporate income taxes, which would benefit people who own stocks. Speaking to a small-business association in Washington this week, McCain portrayed that corporate tax cut as a job creator. McCain said he would reduce the U.S. corporate tax rate "from the second-highest in the world to one on par with our trading partners." Doing so, he said, would keep "businesses and jobs in this country." McCain also proposed faster depreciation for business equipment and said he wants to increase the standard deduction for dependents by two-thirds.

Burman says McCain's tax cuts are clearly aimed at boosting the economy. He would lower marginal tax rates on personal income and cut corporate tax rates by a lot. "Normally, you would expect those would encourage more economic activity," he says.

But according to Burman, if those tax cuts produce larger federal deficits, the positive growth effects could disappear. McCain claims he will end the deficits by scrubbing the budget of earmarks and wasteful spending, but Burman says that realistically, the savings are not likely to come close to ending deficits.

While McCain's tax plan focuses on growth, Obama's tax plan places its priority on reducing income inequality. "The share of [U.S.] income going to the top 1 percent and top 0.1 percent of the population has grown to almost unprecedented levels in the past 20 years," Burman says. Meanwhile, the bottom 80 percent has had very modest income growth.

Throughout the campaign, Obama has made clear he wants to close that income gap. Obama has called for ending "the Bush tax cuts to the wealthy" and proposed "tax breaks [for] middle-class Americans and working Americans who need them."

Among Obama's proposals is a tax credit of up to $1,000 for two-earner couples and $500 for individuals to offset their Social Security and Medicare payroll taxes. Obama would also expand the earned income tax credit to aid low-income workers.

All households, except those in the top 5 percent of the income scale, would benefit from Obama's tax cuts. Households making under $20,000 a year would, on average, get a $570 break from Obama's plan. They'd get a $19 break under McCain's.

In the end, the Tax Policy Center's Burman says, both Obama's and McCain's plans would add to the national debt.