Accessibility links
Peter Broderick: 'And It's Alright' Take a look at musician and songwriter Peter Broderick's resume and you'll likely have a hard time believing that he's only 21 years old. Not only does Broderick play violin for the experimental Danish rock group Efterklang, but he recently released Home, a lovely solo album with delicate harmonies and acoustic guitar.

Peter Broderick: 'And It's Alright'

Peter Broderick: 'And It's Alright' 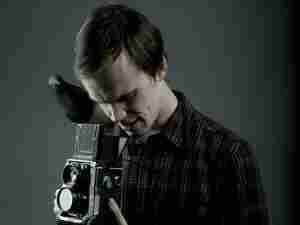 It's hard to believe multi-instrumentalist and songwriter Peter Broderick is only 21 years old. He studied classical violin as a child before but went on to learn as many other instruments as possible. The hard work paid off, as he later spent time playing and touring with the likes of Norfolk & Western, Horse Feathers and Laura Gibson, before being asked to join Danish experimental rock group Efterklang as its violinist. So in 2007, Broderick left his Portland, Ore. home for Europe, where he's been based since.

In addition to touring extensively with Efterklang, Broderick has found time to make some solo recordings. Earlier this year, he released his gorgeous, full-length debut, Float, comprised of string and piano compositions. Up to that point, Broderick's solo work had been primarily instrumental, and Float continued in that vein. But his new sophomore album, Home, takes Broderick's music in a new direction. He's given up the piano and violin on Float for soothing acoustic guitar and ethereal folk melodies.

Though there are many highlights on Home, one of the most notable is its second track, "And It's Alright." Broderick's reassuring repetition of the song's title, while backed by organ and lightly rattling percussion, makes it the sort of tune ideal for unwinding after a particularly stressful day. Actually, all of Home emits a delicate and calm mood, from its opener, "Games," all the way to the revisited version, "Games Again," that closes this masterful release. If this is what Broderick is capable of accomplishing at the age of 21, one can only imagine what's in store. Based on Home, it's bound to be lovely.