Accessibility links
Rachel Maddow: Sassy, Acerbic And — Yes — Liberal The host of MSNBC's nightly political roundup The Rachel Maddow Show offers a combination of perspectives not often seen on cable television — that of a former Rhodes scholar, an AIDS and prison reform activist, a left-leaning radio host and an openly gay woman. 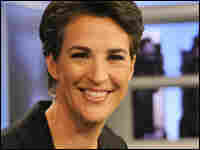 Rachel Maddow, the host of MSNBC's nightly political roundup The Rachel Maddow Show, offers a combination of perspectives not often seen on cable television — that of a former Rhodes scholar, an AIDS and prison reform activist, a left-leaning radio host and an openly gay woman.

She also happens to be a natural, says Phil Griffin, the new president of MSNBC, who likens Maddow to "Willie Mays out there."

Maddow, whose background is in radio (she still hosts a show on the liberal network Air America) doesn't own a television. She first came to cable television as a pundit, but it wasn't until she filled in for Keith Olbermann, and — unlike all the previous fill-in hosts — managed to keep the audience tuned to the network, that MSNBC decided to give Maddow a show.

The Rachel Maddow Show now airs between two hours of Countdown — which means that MSNBC is braodcasting three hours of left-of-center news and commentary in prime time, five days a week. Since its arrival on the airwaves in August, the program has doubled the cable network's viewers at 9 p.m., sometimes beating CNN's Larry King in the ratings.

Maddow frequently spars on-air with conservative political commentator Pat Buchanan, something that began when Maddow was a pundit on other shows. The two seem to model a respectful, argumentative style of debate that's not often seen on cable TV, though Maddow wonders if Buchanan believes their debates legitimize her views and are therefore bad for the country. She also questions if the sparring makes her sound more extreme than she thinks she is. (Some of the host's views may surprise fans: On her Air America radio show and as a pundit she has expressed concerns about national security that are not typical of some liberals.)

On MSNBC, Maddow tends to be sassy and outspoken. Recently she highlighted John McCain's connections to ACORN, the group he accuses of perpetrating voter fraud on behalf of Barack Obama:

"This is a picture of John McCain in 2006 at a rally co-sponsored by — say it with me — ACORN. John McCain was the keynote speaker at the ACORN event; I'm not kidding," she said.

Maddow is not without critics: John Gibson of Fox News remarked that the only way MSNBC could get any more left would be by exhuming Che Guevara from his grave, and David Frum, a journalist and former speechwriter for President Bush, accused Maddow of clouding over substantive issues with "heavy sarcasm and sneering."

For her part, Maddow argues that she is giving real information — just in a funny and acerbic way. She says that MSNBC values hosts who are characters regardless of political leaning.

"[The message of the network is] feel free to broadcast from somewhere beyond the middle of the bell curve. Don't try to seem like everyman. Try to be a real person," she says.

Maddow points out that though she is liberal, she doesn't fit neatly into any "mythical mainstream": "I am female; I have a background as an AIDS activist. ... I am out about [being a lesbian]."

She says she's still learning the ropes of television; the day I interviewed her, she had only had two hours of sleep — not that she's complaining.

"Who knows how long this is going to last? I won the job lottery — I got my own TV show, in an election year, on a network that knows exactly who I am. I have no idea when I am going to wake up from this dream, but while I am in it I want to do something I am really proud of," she says.

As for sleep, Maddow says she'll get some Nov. 5.