Accessibility links
Chicago High School Raises Crops, Career Hopes Students at Chicago's High School for Agricultural Sciences learn from farming livestock and crops, but they also train for several other careers. Ag High's curriculum includes subjects such as English, history and science, along with classes literally taught in the field. 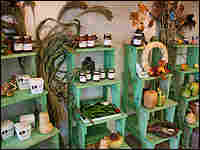 Butter pickles, fresh salsa and applesauce are just some of the products grown, made and sold at the Chicago High School for Agricultural Sciences. Students operate a farm stand. Peter Breslow/NPR hide caption 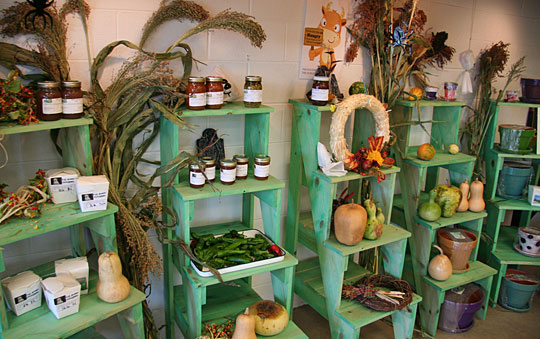 Butter pickles, fresh salsa and applesauce are just some of the products grown, made and sold at the Chicago High School for Agricultural Sciences. Students operate a farm stand. 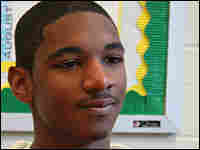 Dantrell Cotton, a junior, says the school has changed the way he sees the world. Peter Breslow/NPR hide caption

Student Sara Schneider tends to hundreds of poinsettias, expected to bloom in time for the holidays. They'll be sold at the farm stand. Peter Breslow, NPR hide caption 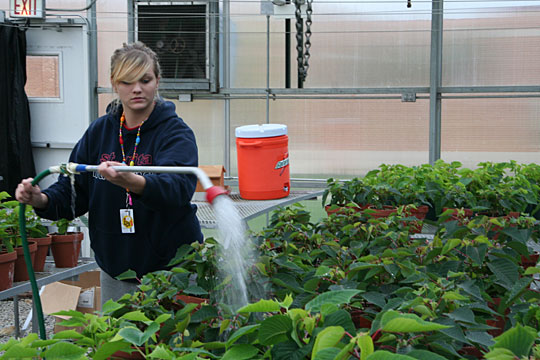 Student Sara Schneider tends to hundreds of poinsettias, expected to bloom in time for the holidays. They'll be sold at the farm stand. 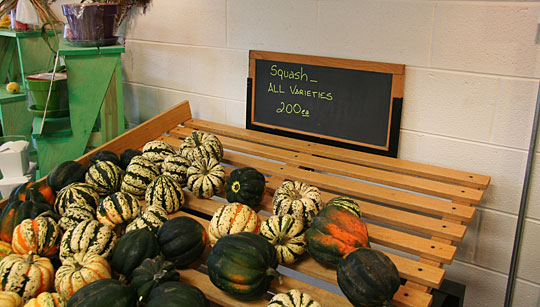 Different varieties of squash entice at the school's farm stand.

On Chicago's southwest side, the intersection of 111th Street and Pulaski Boulevard is just about as urban as bus exhaust. There's a pizza parlor on one corner. Heavy trucks trundle past, carrying heavy things like cars, steel and cement.

But if you listen carefully to the cacophony of car horns and bus splats, you may hear Lucy, chomping on grass like a pig, which she is — a Vietnamese pot-bellied pig of 350 pounds and then some. Lucy is also the resident mascot at the Chicago High School for Agricultural Sciences, a public school and a 72-acre working farm. Its 600 students grow corn, milk cows, farm fish and run a stand where their own apples, pickles and cookies are for sale.

First and last, it is a public high school, with students clustering to gossip and teachers reminding them that they're in class — even when their class is in a barn. They sit on the rails of a corral and gossip about a goat — a real goat — they're worried looks too thin.

Dr. Joan White is the school's teaching veterinarian. Her patients include two horses: Dalia, who has arthritis, and Splash, "who has Wobblers syndrome," White says. "Both of them would have headed somewhere bad, but we use them to teach husbandry, anatomy, teaching basic skills."

Ag High, as it's called, opened in 1985. It's the second agricultural high school in the country — and one of the first steps toward Chicago's long effort to rejuvenate its public schools with innovation and experimentation.

Students must apply to attend, and some travel more than an hour each way each day. They take the full academic load of English, history, science and language classes. But they also spend part of the day in classes and enterprises distinct to Ag High, such as tending the greenhouse, which right now is planted with hundreds of poinsettias. These will bloom in time for the holiday season and will be sold at the school's farm stand.

Students also mind five tanks of tilapia. The fish will be sold to restaurants, and the little flecks of waste that they swirl through their tank is sprinkled on the soil of basil plants. The basil is harvested to make pesto produced by the school and sold at the stand.

Anderson plans to become a food inspector. She says the high school isn't just about growing and baking, but about the business — big business — of real agriculture. She has partnered with her friend, Heather, on their own line of products.

A Working School, A Working Farm

In Richard Johnson's Ag Finance class, students debate as passionately over what to sell at the farm stand as some students argue about rap versus hip-hop:

"I'm tired of eatin' everything zucchini," says another.

Amid these debates about the farm stand and livestock, the voice of principal William Hook over the P.A. system reminds that Ag High is, of course, a working school. Most of his daily announcements — about the homecoming dance, football scores and detention — blaring through the hallways could be transmitted in more traditional schools.

"There will be detention on Saturday starting this week," he says. "You must meet at the barn at 8 a.m. and work for the duration of your detention. Thank you, and have a good day."

Hook thinks the mix — of city and country, academics and enterprise, classroom and street cred (or, in this case, field cred) — strikes a balance in learning. Instead of having students choose between a college track or a vocational track, "We show that you can do both," he says. "You'll have students out sixth period in pre-calculus class, and then in seventh period they're out laying sod. I think that they learn just as much from doing either one of those things. And I think that's one of the things we do really well here: We prepare them for college and we prepare them for the world of work."

'Ag Is The Future'

A group of students who are city kids confessed it had not been their life's ambition to attend an agricultural high school. Several said their parents were eager for them to apply, because the school is academically distinguished. And, it's notably safe: The metal detector at the school entrance didn't seem to be in use.

Ryan Shelton, who hopes to go on to college in New York and become an actor, is one of those students who needed to be won over. He says the school has made him a "more well-rounded person. And when you're in that field of entertainment, one of the things people look at is whether you have that quality, that 'it' factor, diverse."

Dantrell Cotton, a junior, says the school has changed the way he sees the world. "Ag is all around us. It branches off to thousands of occupations," he says. "No matter what happens economically, that's one of the industries that remain the same. And ag is the future. Agriculture is the future."

Some students confide that friends in their urban neighborhoods mock them as "farmers." Those friends don't understand farming as a modern, scientific and cosmopolitan enterprise that teaches improvisation and persistence.

"A lot of people don't understand what we get at this school that nobody else does," says Melissa Nelson, another junior. "Because what other school can you be like, 'Oh, yeah, we were out in the field and then the tractor broke down so we had to walk back'?"

The farm stand has many students with special needs working the shelves and helping customers. The teacher who runs the stand, Richard Johnson, used to have a family lawn mower business. But he was intrigued by education, and when the Chicago Public Schools began to open the door for teachers with professional backgrounds in business, arts or the military, Johnson signed on. He now holds forth in what may be the only Chicago high school with bales of hay. Last week, when a customer wanted to rent some for a Halloween party, a couple of Ag students saw an opportunity.

"So, after they made the deal, the kids called me and said, 'Hey, Mr. Johnson, we got $45. And they'll bring [the bales] back on Wednesday.' Entrepreneurship at its best. Not like working at White Castle," the teacher says. "You have to make decisions. I think the skills we teach, the entrepreneurial skills, they transcend ... agriculture."

By the way, one especially posh local restaurant buys tilapia from Ag High. But the school won't disclose the name. It seems the chef doesn't want customers to know that the fish in their tilapia with smoked mushroom aioli and ginger-flavored vegetables isn't plucked fresh from the Nile but is trucked in — all the way from exotic 111th Street.