Accessibility links
Study Links Warm Hands, Warm Heart Holding something warm or cold influences your attitudes toward others, new research suggests. In an experiment at Yale University, student volunteers thought more favorably of strangers when handed a cup of hot coffee than when holding iced coffee. 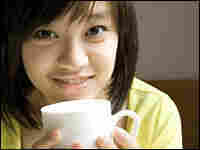 In an experiment, college students experiencing physical warmth perceived emotional warmth in strangers. Talk about getting in touch with your feelings. iStockphoto.com hide caption

If you're going out on a date anytime soon, you may find this bit of science news useful: In a carefully controlled experiment, people who held something warm were more likely to perceive someone else as emotionally "warm" – and they were more likely to behave in a friendly, generous way themselves.

So order the soup, not the salad.

The student volunteers didn't realize when the experiment started. They showed up at Yale University's psychology building and met their contact near the elevators. She was holding some textbooks and a cup of coffee.

Lawrence Williams, who teaches at the University of Colorado, helped design the experiment while he was a doctoral student at Yale. He published his results in this week's issue of the journal Science.

The woman with the coffee was his confederate. She knew what she was supposed to do, but she didn't know why. One by one, she took the students up to the fourth floor in an elevator. As they rode up, the woman asked students, "in a pretty innocuous way, if they wouldn't mind holding her coffee cup while she wrote down some information," Williams explained.

Half the students got to hold hot coffee; half got iced coffee. They held the cup for only a few seconds. But that short experience must have changed something in their brains.

When they arrived at the fourth floor, they filled out questionnaires. They read a short description of a hypothetical person — Person A — and they had to evaluate this stranger's personality.

In Touch With Emotions

Williams thinks it's no coincidence that we use the same word — warmth — to describe both a physical and an emotional experience. Somewhere in the brain, those two sensations are linked, he says. And you can imagine why: Think of a baby held in its mother's arms. The child is experiencing love, affection, comfort.

"But you also have, at the same time, an experience with a warm object, in that case a warm human being," Williams said.

Williams carried out a related experiment to confirm this connection. Some student volunteers were asked to evaluate a hot pad, the kind used to treat injuries. Others held a cold pad.

They got to choose a reward for participating. Those rewards — sometimes a fruit drink, sometimes ice cream — were described either as something for the volunteers to enjoy themselves or to give as a gift to a friend.

Apparently, holding something warm made them feel more generous. If nothing else, said Williams, the experiment demonstrates the tight connection between our minds and bodies.

In fact, some scientists think emotions actually start in the body. Andreas Meyer-Lindenberg, director of Germany's Central Institute for Mental Health in the city of Mannheim, notes a controversial theory that fear and happiness start as physical reactions. That signals the brain and allows us to feel the emotion.

In this hypothesis, he said, a disembodied head "wouldn't be able to feel these emotions, because they are signatures that actually come from the body and are registered in the brain."

After he read about this experiment, Meyer-Lindenberg says, he made a mental note: At his institute's next advisory council meeting, everybody gets something hot to drink.