Accessibility links
NBC Defends Release of Va. Tech Gunman Video Police say they now have a "critical component" in their investigation of the Virginia Tech shootings after NBC News received a package from Seung-hui Cho containing a "multimedia manifesto."

Student Clay Violand: "And the Next Thing I Know There's This Gun Coming Through the Door, Followed by a Man" 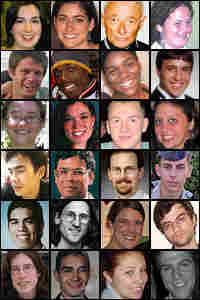 Friends and family share recollections of those who were lost. hide caption 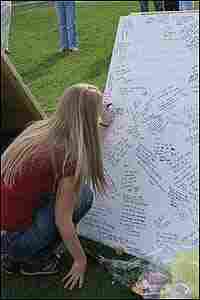 Memorial boards stand outside Norris Hall at Virginia Tech. A woman records her thoughts and remembrance to the 32 victims killed on campus on April 16, 2007. Amy Walters, NPR hide caption 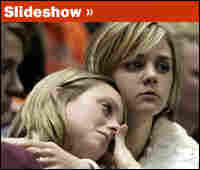 Students embrace during a convocation Tuesday to honor the victims of Monday's shootings at Virginia Tech in Blacksburg, Va. Steve Helber/AP hide caption

Associate Professor Scott Hendricks: 'I Was in My Office and Just Started Hearing Shots'

Student Tiffany Otey: 'We Heard Gunshots from Downstairs. None of Us Was Sure What Was Going On'

Senior Barrett Clark Tells Neal Conan: 'When We Left the Building… We Knew Something Was Wrong' 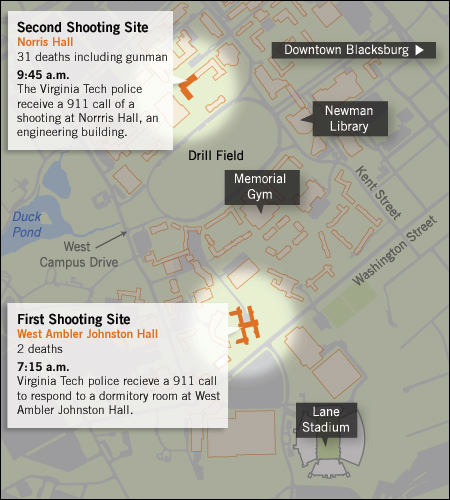 The first shooting occurred at about 7:15 a.m. at West Ambler Johnston, a coed dormitory. The second shooting took place two hours later, at Norris Hall, an engineering building about a half-mile away.

Response to the Shootings 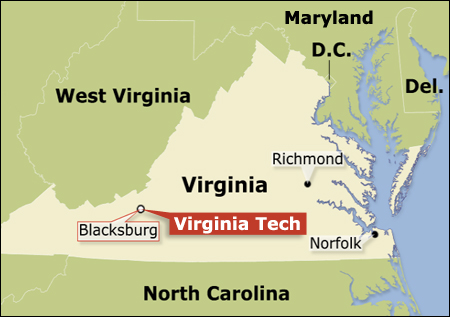 A gunman opened fire on the Virginia Tech campus in Blacksburg, Va., on Monday.

A cell phone video on CNN captures the sounds of the shootings on the Virginia Tech campus.

NBC News is defending its decision to release video and pictures of the 23- year-old gunman responsible for the shooting deaths of 32 students and teachers at Virginia Tech on Monday.

After the airing of news reports, several family members and friends of the victims said they were upset by the images and that they felt like they were reliving the nightmare. Some canceled interviews with NBC in protest.

NBC aired select pieces of the "multimedia manifesto," including a 23-page written statement, 28 video clips and 43 photos, it had received in the mail Wednesday, and other networks followed suit. Images from the package showed a verbal, animated Cho, who classmates and suite-mates said was generally silent and devoid of expression, brandishing weapons and alluding to the massacre.

In the videos, Cho railed against rich "brats" whose "debaucheries … weren't enough to fill your hedonistic needs." Cho declared, "You have vandalized my heart, raped my soul, and torched my conscience." And he assigned blame for the massacre he was about to commit on others. "You had a hundred billion chances and ways to have avoided today. But you decided to spill my blood," Cho said in one video clip.

The images of Cho proved a chilling sight: his head nearly shaved, Cho wore a black baseball cap turned backwards, a black T-shirt, tan vest and black gloves. He sometimes posed with a gun in each hand or one pointed straight at the camera. The sound of his voice, so little heard when he was alive, was etched with anger, defiance and, on occasion, resignation.

"This is it. This is where it all ends," Cho said wearily, the hood of a gray sweatshirt pulled over his head. "End of the road. What a life it was. Some life."

NBC News President Steve Kapas defended the release of the tapes and pictures amid concerns. "This is as close as we'll ever come to being in the mind of a killer," Kapas said Thursday.

In response to the concerns raised by some, Fox News said it will no longer air the footage, and other networks said they would severely limit future use.

While NBC News held off on airing material until investigators had a chance to examine the contents of the package, the images shed little new light on Cho's actions or what precisely happened in the run-up to the killings.

"The fact of the matter is, we already had most of this information," Virginia State Police Superintendent Steve Flaherty said. "The package simply confirmed what we already knew in many cases."

Police said they will soon be closing down their on-scene work.

State and federal investigators admit they have as many questions as answers as they close down their on-scene investigation.

Investigators said they have not found a connection between the gunman and any of the victims and don't know whether Cho mailed the package to NBC himself, at this point.

The package under investigation had been post marked at 9:01 a.m. in Blacksburg, Va., Monday, which was nearly two hours after Cho killed two students in a dormitory and moments before he felled 30 others before killing himself in a classroom building.

"We are very much engaged in finding answers to that question," Colonel Flaherty said. He noted that the time stamp on the package may not reflect the time the package was dropped off, since April 16 was a "very busy time" for the post office, as people hurried to meet tax filing deadlines.

In a news conference Thursday, Flaherty said he believed all the videos had been shot before April 16. The videos taped in various locations, perhaps over a period of several days.

One of Cho's former suitemates, Karan Grewal, told CNN that he recognized the background of white cinderblocks in the videos as the common area in their suite, suggesting that Cho had shot his threatening movies under the nose of other students. There are also references to the shootings in the past tense, which opens the possibility that some of the video was recorded in the two-hour gap between the first shooting of two students in a dormitory and the rampage at a classroom building.

Last night at Virginia Tech, students watched clips from the videos played on television sets across campus. Marisa Itte told NPR that seeing the angry gunman gave her some clarity.

"In a lot of ways it makes it better to know he's just a crazy person," she said. "That is just completely not our university's fault. This has nothing to do with anyone else. This is just his issue."

Amid the flurry of activity related to the contents of the packages, university officials addressed the students and families coping with their losses. They announced that the victims would be awarded degrees posthumously at commencement. They also said classes will resume on Monday, but that each student may make his or her own choice on how to finish the semester.

A Stark Look at the Shooter

In his "manifesto," Cho makes reference to Eric Harris and Dylan Klebold, the students at Columbine High School in Colorado who killed 12 classmates and a teacher eight years ago this week. The phrase "Generation after generation, we martyrs like Eric and Dylan," appears in the written document.

Today at Westfield High School in Chantilly, Va., students recalled other parallels with the two teenaged shooters in Colorado. Harris and Klebold also were considered unsocial by other students and reacted by forming an exclusive group called the Trenchcoat Mafia.

Cho suffered his own humiliations. Chris Davids, a Virginia Tech senior who graduated from Westfield with Cho in 2003, told the Associated Press that the South Korean immigrant almost never spoke and shunned efforts at friendship.

In an English class during high school, a teacher threatened Cho with a failing grade for participation unless he read aloud as the other students had. Cho started to read in a strange voice that sounded "like he had something in his mouth," Davids said.

"As soon as he started reading, the whole class started laughing and pointing and saying, 'Go back to China,'" Davids said.

Much of the attention is focusing on Cho's troubled history, and whether the university sufficiently protected its students. University officials have defended their actions repeatedly, noting that their hands were tied because his case was handled entirely in the public health system.

In November and December of 2005, two female students complained that Cho had been stalking them. Police said the two women reported that Cho had sent them "annoying" phone and e-mail messages, but he apparently made no threats. Neither woman pressed charges and nor was a victim of Monday's rampage.

Campus Police Chief Wendell Flinchum said the day after the second woman made her complaint in December 2005, an acquaintance of Cho's called police with concerns that Cho might be suicidal. Police recommended that Cho see a counselor. Flinchum said his records did not show any other contact between police and Cho until this week.

A Virginia court order obtained by NPR shows that Cho was taken into custody for a mental evaluation in December 2005. The order declared Cho mentally ill and said he was an imminent danger to himself or others. After an evaluation, a "special justice" ruled that Cho "presented an imminent danger to himself as a result of mental illness," but not to others. The "special justice" decided that involuntary hospitalization and treatment were not necessary.

Cho was released and returned to school. The university's policies mandated that it could not restrict Cho's activities or expel him, as that would discrimination against someone who was mentally ill.

Cho is a South Korean national who moved to the United States when he was 8. While it is common in Korea to put one's surname first, he appears to have Americanized his name in this country, putting Cho last.

Acquaintances describe Cho as quiet, refusing even to introduce himself in one class. They say he would wear sunglasses constantly, even indoors. And two screenplays he wrote disturbed those who saw them.

"When we read Cho's plays, it was like something out of a nightmare," said former classmate Ian MacFarlane, who posted what he said were two of Cho's scripts on an AOL blog. "The plays had really twisted, macabre violence that used weapons I wouldn't have even thought of," MacFarlane told the Associated Press. McFarlane said he and other students worried "about whether he could be a school shooter."

Lucinda Roy taught Cho creative writing and tells NPR she found some of his works troubling.

"I contacted the police, contacted counseling, student affairs, the college, to try to sound some alarms," she says. "And they felt their hands were tied legally for various reasons. Until someone actually threatens to do something, it can be incredibly difficult to make something happen."

University officials say privacy laws prevent them from saying whether Cho had a formal disciplinary record.