Accessibility links
Survey: U.S. Doctors Regularly Prescribe Placebos The American Medical Association says doctors shouldn't prescribe placebos because the practice undermines trust. But in a new study, about half of the physicians surveyed say they regularly prescribe placebos — and that patients are mostly unaware. 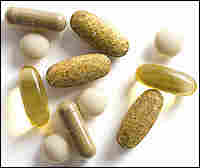 Although many doctors say they give placebos to their patients, others say the practice is "skirting on the edges of ethical behavior." iStockphoto.com hide caption

Placebos are common in medical research testing. One group of volunteers gets a test drug, while another group gets a look-alike sugar pill. Everybody is told upfront that they could get one or the other.

But a new survey finds that many U.S. doctors regularly prescribe placebos even in everyday patient care — for conditions that haven't responded to treatment, such as chronic pain or fatigue. Patients are almost never aware that they are getting a placebo.

The idea is that if a patient thinks the pill will help, it just might.

Of nearly 700 U.S. internal medicine doctors and arthritis specialists surveyed, almost half said they prescribe placebos regularly — two to three times a month. Only 1 in 20 doctors told patients they were getting a placebo.

Doctors say they most often will prescribe a vitamin pill or over-the-counter painkiller, though some prescribe an antibiotic or sedative, which the authors of the study say could be harmful. Typically, doctors tell patients the placebo is "potentially helpful, but not designed for your specific illness."

"Half of all American internists and rheumatologists using placebos was a real surprise to me," says Dr. Ezekiel Emanuel, head of ethics at the National Institutes of Health and an author of the study, which appears in the current issue of the British Medical Journal.

Dr. Howard Brody was surprised, too. Brody, an expert on placebos at the University of Texas in Galveston, says the research shows how much doctors' attitudes have changed over the past few decades.

"For many, many years, the typical reaction of a physician was, 'Well, real doctors don't prescribe placebos. A placebo is a fake medicine. So only a quack would prescribe a placebo,' " says Brody, who was not involved with the survey.

Since the 1960s, the dominant ethic among U.S. physicians has been "patient autonomy." This means patients are in charge, that they are entitled to know everything about their care, and that a doctor should get informed consent before giving any treatment.

But if many doctors are handing out placebos, it would be at odds with this ethic, Emanuel says.

The American Medical Association recognizes the predicament. Two years ago, it adopted a policy that the use of a placebo without a patient's knowledge can undermine trust and even result in medical harm.

Robert Sade, a South Carolina surgeon, was chair of the AMA's ethics council when the new policy was adopted.

"Physicians who use placebos are not being 'unethical,' " Sade says. "But they're skirting on the edges of ethical behavior."

The AMA says if doctors want to use placebos, they should tell patients that one or more of the pills they're getting is not specifically designed for their illness, but that some have found it helpful. This is basically the definition of a placebo. Studies have shown that placebos sometimes do help people who expect them to work.

It's sort of an experiment involving a single patient. Either or both pills could be placebos.

But some say this is just a more elaborate kind of deception. "This is not informed consent," says Ted Kaptchuk of Harvard Medical School, who researches the placebo effect. "There's something wrong with the AMA position. I'm not comfortable with it at all."

Emanuel, the NIH ethics chief, agrees. "I think we're all just a little nervous about that as a common practice," he says. "Even though it might be on the right side of deception, we're not being fully frank with the patient."

But Emanuel doesn't condemn all placebo use. After all, he says, it shows that American doctors understand that the mind plays a big role in healing, and that's not a bad thing.