Accessibility links
In 'Synecdoche, N.Y.,' A State Of Mind Expanded A theatrical director, driven by ambition and anxiety, restages his own life — on a full-scale New York set he builds in the shelter of a huge warehouse. Bob Mondello says it's one heck of a head-trip. (Recommended)

Listen
In 'Synecdoche, N.Y.,' A State Of Mind Expanded 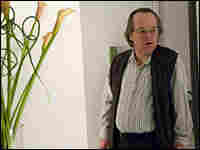 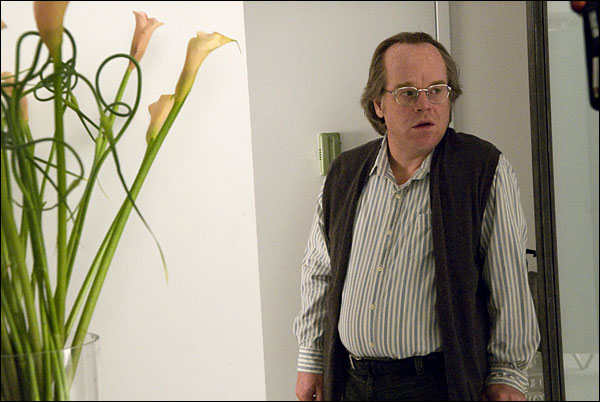 Abandoned by his wife, director Caden Cotard (Phillip Seymour Hoffman) embarks on a massive theatrical project ... about the life of Caden Cotard.

'What Was This Used For?' 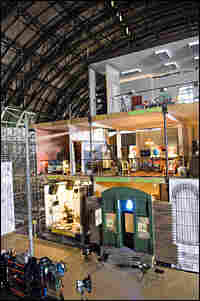 In an enormous warehouse, Caden recreates the settings and scenes of his life — and eventually begins to live more in that world than in the real one. Abbot Gensler/Sony Pictures Classics hide caption 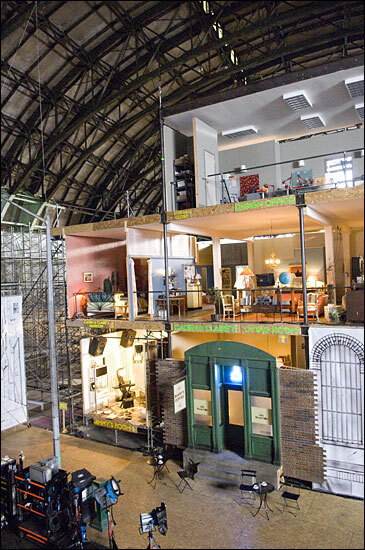 In an enormous warehouse, Caden recreates the settings and scenes of his life — and eventually begins to live more in that world than in the real one.

Imagine a theater director who looks at his life as if it were a play. That's Caden (Philip Seymour Hoffman), and the script of his life is, well, odd. One morning, for instance, he's attacked by his bathroom sink — the faucet works loose when he turns on the water, and knocks him in the head. And the emergency room, for some reason, sends him to an opthamologist, though he doesn't have vision problems.

Welcome to Caden's world, where every conversation sounds like it belongs on stage — including those Caden has with Hazel (Samantha Morton), a sweet box-office clerk he falls for at about the same time he wins a "genius grant."

The money allows him to create a massive theater piece about creating a massive theater piece. He hires Hazel as his assistant, and he hires an actor to play a stage version of himself, and another to play a stage version of Hazel, and in a huge warehouse in New York City, he has designers create a life-size chunk of New York City.

The drift here is that Caden is a man who is constantly observing his own life, rather than living it. "I know how to do it now," he keeps telling Hazel, but he never really does.

So actors keep stepping out of character to comment on character as Synecdoche, New York ties itself in intricate narrative knots — so many knots that I found myself imagining writer-director Charlie Kaufman arranging and re-arranging thousands of plot points on Post-It notes to keep it all straight.

And at about that moment, Kaufman showed Caden staring at plot-point Post-It notes stretching to the horizon. Down the rabbit hole, through the looking glass, up the down staircase ... to where, exactly?

Well, I'm not sure I'm sure, but note that what Kaufman's having his theater-crazed character create here is more or less what a filmmaker creates every time out: a representation of reality. Caden, of course, takes the representing to a point that's sort of psychotic.

Still, the way it's represented on screen is very attractive, considering that Synecdoche, New York marks the directorial debut of a longtime screenwriter. Zeppelins floating through warehouse skies, dopplegangers leaping off buildings even as technicians are putting finishing touches on the walls; I suspect viewers will find the film either intriguing or impenetrable, or perhaps both at once.

But as with nearly all the films Kaufman wrote before this one — including Being John Malkovich, with its portal into the title character's brain, and Eternal Sunshine of the Spotless Mind, with its lovers merrily scrubbing away their memories of each other — Synecdoche, New York is one heck of a head-trip. (Recommended)