Accessibility links
Obama Redraws Map Of Religious Voters Democrats traditionally have not been seen as the party of the faithful, but Obama has tried to change this by speaking openly about his faith. He has also hired outreach directors to specifically woo Protestants, evangelicals and Catholics. 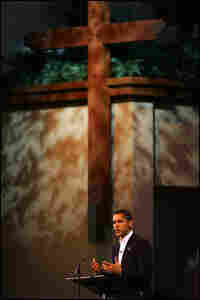 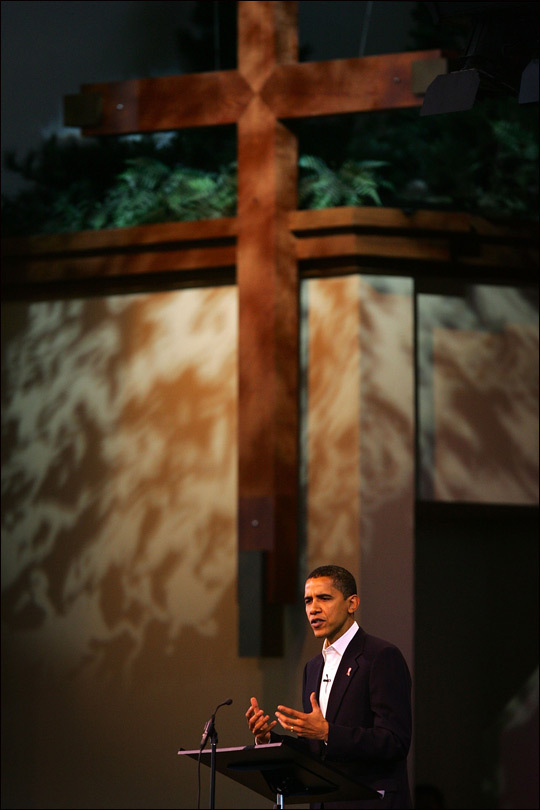 Sen. Barack Obama speaks at the second annual Global Summit on AIDS and The Church at Saddleback Church on Dec. 1, 2006, in California.

NPR also examined Republican John McCain's ties to religious voters — and in particular, his bid for the support of evangelicals.

Religious language trips off Barack Obama's tongue as if he were a native of the Bible Belt.

From the moment he emerged on the national scene, he has spoken to believers in a language few Democrats have mastered: the language of the Bible and of a personal relationship with God.

Sometimes he shares his adult conversion story, describing how he knelt beneath the cross at his Chicago church: "I felt I heard God's spirit beckoning me," he says. "I submitted myself to his will, and dedicated myself to discovering his truth and carrying out his works."

Sometimes he speaks of sin and personal responsibility: "When a gangbanger shoots indiscriminately into a crowd because he feels someone has disrespected him," he told a group of religious progressives in 2006, "We've got a moral problem. There's a hole in that young man's heart."

And sometimes he borrows code words, not from hymns, but from Christian rock star Michael W. Smith, such as when he proclaimed at the 2004 Democratic National Convention, "We worship an awesome God in the blue states!"

It is this ease with religion that has helped Obama win over voters of various religious stripes — including Catholics who traditionally have voted Republican.

Pollster Robert P. Jones of Public Religion Research says that Obama's appearance at the 2004 convention was a turning point in the relationship between Democrats and believers. Then, a majority of Americans viewed the Democratic Party as hostile to religion. But Jones' poll this month found a remarkable shift.

"Barack Obama was perceived to be more friendly to religion than John McCain," he says. "And that is, I think, an indication of the real sea change that's under way, and the way in which religion is interacting in public life."

Obama hired outreach directors for Catholics, evangelicals, Protestants and smaller religions, and he sent popular religious personalities to forums at colleges and homes.

"The effort that they are undertaking is 10 times larger than what we did at the Kerry campaign," says Mara Vanderslice, who briefly ran John Kerry's religious outreach program in 2004 with little more than gum and shoestring. She now runs the Matthew 25 Network, which places pro-Obama ads aimed at religious believers. She says, like the starship Enterprise, Obama is going where no Democratic presidential candidate has gone before... Christian radio.

"You know, folks who are listening to contemporary Christian music stations are moderate Christians and evangelicals, and they're exactly the voters we want to reach," she says. "So I think it's highly effective and it's exciting to see that Democrats are no longer conceding that ground."

The firestorm drove some voters into the McCain camp, although pollsters think those people were McCain supporters anyway. Obama denounced Wright, and the issue has faded away, perhaps because McCain made the issue off-limits.

What hurt Obama far more was a televised interview in August. In what some Obama insiders consider a "disaster," Obama answered questions from Rick Warren of Saddleback Church in Southern California. Warren, a fourth-generation Southern Baptist minister, asked him litmus test questions — about same-sex marriage, stem-cell research, and "when a baby is entitled to human rights."

Obama's long-winded, lawyerly answer: "Well, you know, I think that whether you're looking at it from a theological perspective or a scientific perspective, answering that question with specificity, you know, is above my pay grade."

People who attended say there was an audible gasp at his comment — the kind of giant sucking sound of evangelical votes flying to McCain. Obama lost even more of them when McCain selected an anti-abortion superstar, Sarah Palin, as his running mate.

Obama staffers say they never expected to win over conservative evangelicals, who often vote on culture-war issues. But Obama's campaign saw two other Republican strongholds ripe for the picking. One is younger evangelicals, who consider abortion an important issue — although not in the top five.

But the big prize — the classic swing vote — is Catholics. And as with Protestants, Obama knows their language and their passions.

"Obama actually has a significant Catholic experience in his background," observes Thomas Reese, a Jesuit priest and scholar at Georgetown University. Reese says Obama attended Catholic school for three years when he lived in Indonesia. When Obama was a community organizer in Chicago, he worked out of Holy Rosary Parish, and his program was funded by the Catholic Bishops Campaign for Human Development.

"The way the Republicans talk about his community organizing experience, you'd think he was going down into the inner city and leading rioters," Reese says, laughing. "Where, in fact, he was organizing at Catholic parishes in Chicago, trying to get jobs for Catholic parishioners."

From that work, Obama developed his appreciation for what's called the Social Gospel – that is, Jesus' commands to feed the hungry, clothe the naked, fight injustice. Obama summed it up this way in a recent speech: "My faith teaches me that I can sit in church and pray all I want, but I won't be fulfilling God's will unless I go out and do the Lord's work."

Doug Kmiec is an anti-abortion Catholic who served in the Reagan and first Bush administrations. He says when he heard Obama's early speeches, he realized that Obama's views on health care and wages, on immigration, war and family, echoed the pope's teachings.

"On almost every topic that Catholics are asked to form their conscience about, Sen. Obama was hitting if not a home run, then a triple into those dead corners of the ballpark," he said.

Abortion was the only issue that troubled Kmiec. But he decided that Obama's plan to reduce abortions was better than the Republicans' failed attempts to overturn Roe v. Wade. It turns out, Kmiec has plenty of company.

John Green at the Pew Forum on Religion and Public Life says many Catholics are balancing moral issues like abortion with moral issues like poverty. And that's created a new dynamic. Green says for the past decade, the alliance between traditional Catholics and evangelicals revolved around two culture-war issues: abortion and same-sex marriage.

"Those groups never completely agreed on all the other issues, but they could agree on those social issues," he says. "And as we move into this year's election, we see that alliance perhaps breaking apart, and one reason is because traditionalist Catholics have a broader agenda."

On a recent afternoon at St. Matthew's Cathedral in Washington, D.C., Catholic voters were split over whether or not they would support Obama. This was a marked change from four year years ago when parishioners at the same church were much more adamant about voting Republican in the Bush-Kerry election.

One parishioner, lawyer Andy Kolesar, said he still planned to vote based on the candidates' views on a single social issue. "Abortion will dictate my vote this time, and it has every instance in the past," he said.

But several Catholic voters such as Jennifer Goff were torn.

"I don't think it comes down to one issue," she said. "The economy is a moral issue. People are losing their homes, and they don't have accessible health care, and those are all issues that I have been thinking about."

That there's a dilemma at all for religious conservatives suggests how dramatically Obama has redrawn the religious map.