Accessibility links
A Light Take On The Gravity-Time Relationship : Krulwich Wonders... It's hard for the average person to understand one of Albert Einstein's great insights: that time is not the same for everybody everywhere. Theoretical physicist Brian Greene explains and explores in Icarus at the Edge of Time.

Listen
A Light Take On The Gravity-Time Relationship 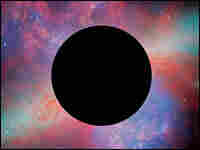 Theoretical physicist Brian Greene gravitates toward colorful storytelling, as he shows in Icarus at the Edge of Time. The book's illustrations include a "black hole" superimposed on an image from the Hubble Space Telescope. Alfred A. Knopf Publicity hide caption 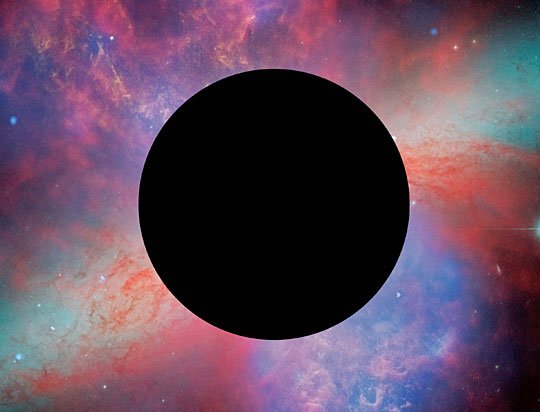 Theoretical physicist Brian Greene gravitates toward colorful storytelling, as he shows in Icarus at the Edge of Time. The book's illustrations include a "black hole" superimposed on an image from the Hubble Space Telescope.

Let's talk about tiptoeing right next to a black hole. Not that you could do that, because the nearest one we know of, near the center of our galaxy, is impossible to get to. Even if you could travel at the speed of light, you wouldn't be able to reach it in your lifetime.

If you traveled the distance and then hopped into a little one-person cruiser and zoomed very close to the lip of a black hole, says professor Brian Greene, a theoretical physicist at Columbia University, the hole would not suck you into its vortex. Black holes, contrary to popular belief, are not giant sucking machines.

They only pull in whatever happens to pass directly in front of the hole. If you slip over the border, then you're in trouble. But if you hang just off to the side, if you cruise around the edge, being careful not to get into the danger zone, you will not get sucked in.

That doesn't mean you won't be affected. Albert Einstein's theories say the closer you get to a black hole, the more it will affect you. And thereby hangs a tale.

Greene has written a short (less than 40 cardboard pages) new picture book called Icarus at the Edge of Time. It tells the story of a young boy who slips off in a space ship and cruises over to a black hole, only to discover that he's made a terrible mistake: He forgot one of Einstein's fundamental observations, which is that time is not the same for everybody everywhere. But before I tell you what happened to the boy, let me pause and tell a version of this same story in New York City, which is nowhere near a black hole. But the same logic applies.

If you and I go to the Empire State Building and I go up to the 102nd floor while you stay down on the street, Einstein teaches that time for me will be different than time for you.

You, down there on 34th Street with the cabs and the pedestrians and the hot dogs, are a wee bit closer to the center of the Earth, while I, upstairs with the wind, the clouds and the occasional pigeon, obviously am a little farther from it.

The center of the Earth, I should remind you, is a center of gravity. That center pulls at you, which is why rain and bricks and pennies and even softballs eventually land on the ground. The Earth pulls them "home."

Einstein meant this not poetically, but literally. If you and I each had a watch, ticking off hundred-billionths of seconds, the watch on your wrist down below on the street would tick fewer times than the watch I was wearing up in the sky. It wouldn't be a big difference -- a few billionths of a second over 20 years -- but it would be a real difference. If we decided after several decades to meet and compare watches, we'd see that they would literally differ, that time for the two of us had indeed ticked differently.

From Skyscraper To Black Hole

In his new book, Greene has come back to this theme, this time using the gravitational pull of black holes, not the Earth.

Black holes have enormous (and I mean enormous) gravitational pull. If you stand next to a black hole and I stand off at a distance, not only will time tick more slowly near the black hole, it will tick so much more slowly that the difference will be obvious.

From where I watch, as you approach the lip of the black hole you will appear to slow your movements, slow even the blinking of your eyes. You will look like a person in slow motion. You will feel perfectly normal. Time for you will seem as tick-tock regular as ever. But should you glance back at me -- I will look frantic and agitated.

What's happening here is we are experiencing very different time sequences. We are also modeling one of Einstein's great insights: that time is not the same for everybody everywhere.

Getting A Feel For The Problem

Experiments have proved that Einstein was right, that this is literally true. But because we don't visit black holes, none of us -- not even Einstein -- ever gets to feel what fractured time is like. And here is Greene's motivation for storytelling.

Greene says he feels strongly that "if people recognize that science is something that can be taken in emotionally, viscerally -- something that can really help frame your whole way of interacting with the world -- that emotional pull of science, I think, would change the way people interact with it."

As for Icarus, the boy in Greenes story, he zings around the lip of the black hole for what he thinks has been an hour or two, until, triumphant, he turns his spaceship around. But he discovers that the reality he knew has been gone for millennia.

In our broadcast, Brian Greene performs a very abridged version of this Icarus tale. Greene, who has acted in movies, plays most of the parts; Robert Krulwich briefly plays the captain of a space ship.