Accessibility links
For Some, Housing Crisis Stress Is Unbearable It's only natural to worry as the value of homes and investments falls. But the financial crisis is hitting some people harder than others. In California, where the housing meltdown started early, some of the financial losses are turning into human tragedies.

Listen
For Some, Housing Crisis Stress Is Unbearable 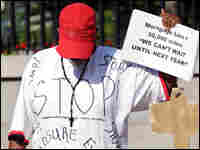 Deborah Williams holds a sign and a homemade key while wearing a shirt in memory of Carlene Balderrama, a Massachusetts woman who committed suicide before foreclosure of her home in July 2008 in Boston. Darren McCollester/Getty Images hide caption 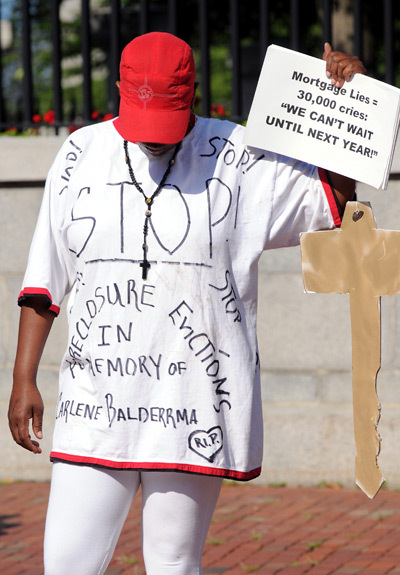 Deborah Williams holds a sign and a homemade key while wearing a shirt in memory of Carlene Balderrama, a Massachusetts woman who committed suicide before foreclosure of her home in July 2008 in Boston.

Where To Find Help

It's only natural to worry as the value of homes and investments falls. But the financial crisis is hitting some people harder than others. In California, the housing meltdown started early. Over the past three months, a record number of Californians lost their homes to foreclosure.

And some of those financial losses are turning into human tragedies, as reports of suicide and other desperate behavior emerge.

Scott Harden lives on a quiet street in North Pasadena, in a neighborhood that is aptly named Bungalow Heaven. Small wood frame houses nestle under spreading shade trees. Residents visit on each others' porches and gossip in rockers. They check up on each other to make sure everything's all right.

But before dawn one recent morning, Harder woke up and smelled smoke coming from the home of his 53-year-old neighbor, Wanda Dunn. He quickly threw on some clothes and went next door to check on her. Their street was still quiet and dark.

"I went out front and looked at the front of her house," Harden said, "and could see plumes of smoke wafting across the street light."

Harden called 911. When emergency personnel arrived, they found Dunn's body in her rear bedroom. She'd apparently set her house afire and shot herself in the head. Dunn had been facing eviction from the only home she'd ever known.

"She'd grown up in the house, from what I understand, and lived there her whole life, so it was all she had," Harden said. "I talked with another of the neighbors down the street, and through the grapevine he'd heard that she really didn't know what to do if she'd lost her house."

Dunn had inherited her bungalow from her family and lost it after she stopped working because of a disability; she had also made some bad financial decisions. The new owner let Dunn rent the yellow stucco bungalow, but he lost the house when the subprime meltdown sent all of California's real estate into a tailspin.

"California represented for many of us the pinnacle of the effects of hard work," Siegel said, "of the ability to pull ourselves up by our bootstraps."

Owning a home, Siegel said, "represented the physical manifestation of all we have done and how hard we have worked."

But Californians' dream of a modest detached home, Siegel says, often morphed into something far grander when the economic boom of the 1990s made home loans — many of them subprime — easier to come by.

"So here, as much as anyplace else, people did overbuy, their houses were bigger than their egos," Siegel said, "and they in fact invested more of themselves and more of their savings in them."

Dunn's suicide is the latest in a series of events that seem to be linked to financial problems. Shortly before Dunn's death, money manager Karthik Rajaram killed his wife, mother-in-law, three sons and himself inside the home they rented in an upscale Los Angeles suburb.

"We believe that he has become despondent recently because of financial dealings and the financial situation in his household, and we think this is a direct result of that," Moore said.

Psychological Strains Of A Slump

"Loss is often a trigger — and there is more loss now that could trigger suicide among those that are already vulnerable," said Dr. Kita Curry.

Curry, a licensed clinical psychologist who heads the Didi Hirsch Community Mental Health Center in Los Angeles, says she has a gauge of how tough things are getting.

"Our 24-hour suicide prevention crisis line has seen an increase in calls, and it does seem to be partially fueled by anxiety and a sense of hopelessness and powerlessness," Curry said.

And middle-class status that once seemed a given isn't anymore. Scott Harden says there are more and more signs reading "BANK OWNED" popping up on his town's lawns — something he never thought he'd see.

"As this is happening in Pasadena — I think it's sort of shaking people to their core," Harden said.

Waiting Anxiously For A Recovery

Anxiety can be contagious, but Siegel says that taking the long view is a good antidote.

"The people who tend to believe that this is going to be for a long time, they're the ones that are feeding off the misery of the current situation," Siegel said. "So keep this in the perspective of, 'we're at a point in time, but only a point in time, and it's not likely to continue forever.' "

The people who feel that the slump could continue indefinitely, then, are those who are struggling to stay afloat until the economy recovers.

The audio for this story and earlier versions of the text misidentified Scott Harden.