Accessibility links
Examining Democracy In Southeast Asia Indonesia is the world's largest Muslim majority country, and it has become Southeast Asia's most vibrant and healthy democracy. That might sound incredible to those who remember Indonesia as a police state run by the dictator Suharto. And despite problems such as terrorist bombings and the tsunami four years ago, Indonesia is clearly at the head of the democratic class.

Indonesia is the world's largest Muslim majority country, and it has become Southeast Asia's most vibrant and healthy democracy. That might sound incredible to those who remember Indonesia as a police state run by the dictator Suharto. And despite problems such as terrorist bombings and the tsunami four years ago, Indonesia is clearly at the head of the democratic class. 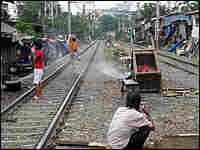 The slums of Petamburan, a subdistrict of Jakarta, Indonesia. Michael Sullivan/NPR hide caption 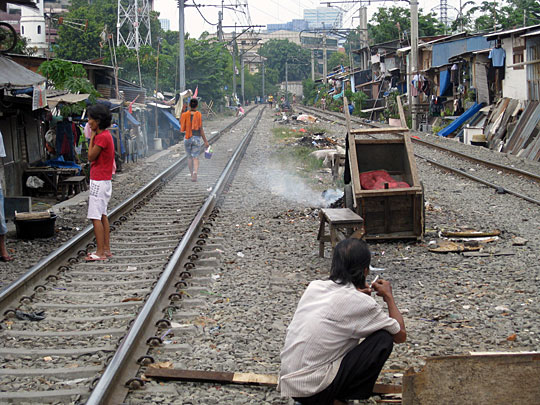 The slums of Petamburan, a subdistrict of Jakarta, Indonesia.

By many measures, we do not quite live in a time when democracy is on the march. And democracy has had a very mixed record in Southeast Asia. Several countries in the region are democracies of a sort. Thailand was considered a leading example, and we'll have more about that country tomorrow. But today NPR's Michael Sullivan reports from Indonesia. It is the world's largest majority Muslim nation, and it's a democratic success story that few had anticipated.

MICHAEL SULLIVAN: Indonesia's capital is a raucous, rowdy, anything-goes kind of place, home to more than 14 million people. And at the end of Ramadan, it gets even louder.

SULLIVAN: The drumming is supposed to accompany the takbur(ph), the prayer at the end of the fasting month. But it's also a chance for young men to simply get out and bang on whatever's handy, a cacophony of sound that's rich, vibrant, and a metaphor for Indonesia's decade-old democracy.

SULLIVAN: When the dictator Suharto fell in 1998, the rioting and chaos that followed had many predicting Indonesia would fragment like Yugoslavia. It didn't happen. Sidney Jones of the International Crisis Group.

SIDNEY JONES: It's something that nobody ever would have believed 10 years ago. But not only is it flourishing, but it's a Muslim democracy that's flourishing. And that should make everybody happy.

SULLIVAN: Eid ul-Fitr prayer at Jakarta's Istiqlal Mosque, Southeast Asia's largest, packed on this day with the faithful. Istiqlal - the word means independence in Arabic - was built to celebrate the country's independence from the Dutch in 1949 which led to Indonesia's first experience with democracy before the 30-year-long rule of the dictator Suharto. Sidney Jones.

JONES: People don't realize that Indonesia had a flourishing democracy in the 1950s. It wasn't as though this democracy came in on top of authoritarianism with no tradition of the give and take of democratic politics. And what we see is Indonesians taking to the reinstitution of democracy like fish to water.

DEWI FORTUNA ANWAR: I think that we deserve a pat on the back.

SULLIVAN: Dewi Fortuna Anwar of the Indonesian Institute of Sciences.

FORTUNA ANWAR: We've had two very successful general elections. Throughout the country, there are elections for governors, for district heads, and so on. In fact, the complaint is now there's too much democracy because there seems to be elections every other week.

SULLIVAN: Allowing the provinces more autonomy has helped keep restive regions like Ache and Irian Jaya in the fold and the Indonesian military in the barracks. For longtime human rights activist Usman Hamid, none of this seemed likely a decade ago.

USMAN HAMID: It's not possible. That's just a dream. It is an illusion, I think.

SULLIVAN: For Usman Hamid in particular, these are heady days. After working for years to bring to justice those responsible for the murder of his friend and fellow activist, Munir, justice now seems within reach with the arrest of a powerful former general, Muchdi Purwopranjono, who in the past would have been untouchable.

HAMID: This is the first ever case where a former military general was arrested and put under detention for the charge of human right violation or the murder of Indonesian human right defenders. And I think this is a major achievement so far.

SULLIVAN: So too, says Dewi Fortuna Anwar, is the military's decision to wean itself from politics after the active political role it enjoyed under Suharto. Getting a handle on Indonesia's legendary corruption, however, has proven harder. But even there, Anwar says, there's been some movement.

FORTUNA ANWAR: The exposure of corruption in the judiciary has shown people, you know, that maybe the democratic transition has not been as successful as it should be. But on the other hand, the fact that it is now being exposed could tell you that precisely it is working, because in the old days all of these bribery scandals would just be swept under the carpet and nobody would even hear about it. That is progress.

SULLIVAN: Indonesia's economy is still growing too, though not as fast as it did under Suharto; growth that spurs construction of an endless stream of upscale mega-malls like this one in the capital, Jakarta. But that growth has been uneven. The gap between rich and poor, some say, widening. The mega-malls are within sight but out of reach of those who live here in Jakarta's Petamburan neighborhood, home to many day laborers and others struggling to get by. Hassan Nudin(ph), 52, is the neighborhood chief. And the 70 or so families who live here bring their problems to him.

SULLIVAN: Democracy is a good thing for us because it means we have the freedom to protest and not worry about retribution from the police, Hassan Nudin says. Before, we didn't dare complain if we were abused or if the police demanded bribes. But economically, he says, things were better before under Suharto. I don't want to go back to the old days, he says, but democracy isn't putting food in our stomachs.

SULLIVAN: Presidential candidate Rizal Mallarangeng says he want to help people like Hassan Nudin and narrow the gap between the rich and poor.

SULLIVAN: Mallarangeng is running for president in next year's election. And though he doesn't really expect to win...

MALLARANGENG: The fact that I can run shows you how far we have gone through. I am 43 years old without political party backup. I'm not a general. I'm not a minister. But I can say to the people, and I can put my TV ad on TV now that I'm running for president. And nobody come to my house knocking my door during the night and bring me to prison or ask me political questions, you know. It's a free country.

SULLIVAN: A free country, he says, where dire predictions about the spread of radical Islam have rung hollow.

MALLARANGENG: Five years ago, after September 11 in America, and there was this Bali bombing, people here were, you know, afraid. And some of our friends also outside were afraid that the fanaticism will take hold. But actually they don't. If you see the latest trend, you know - I mean the long-term trend in Indonesia - the influence of the Islamic parties, in general, are declining.

SULLIVAN: And that may have something to do with Indonesia's unique brand of Islam, brought here 800 years ago, not at the point of a sword, but by merchants and traders, embraced but adapted as well to reflect local customs and traditions. Analyst Dewi Fortuna Anwar says her country's fledgling democracy is big and messy, but she also believes it's here to stay.

SULLIVAN: Tomorrow, a look at a country once seen as the best hope for democracy in the region, Thailand, where democracy is now under threat. Michael Sullivan, NPR News, Jakarta.