Accessibility links
Grown-Up Tricks For Treats If you love Halloween candy but outgrew trick-or-treating — and creepy-crawly eyeball cupcakes — years ago, desserts featuring Halloween favorites like toffee bars and peanut butter cups will make you feel like a kid again. 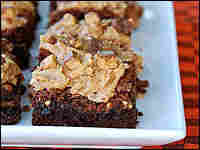 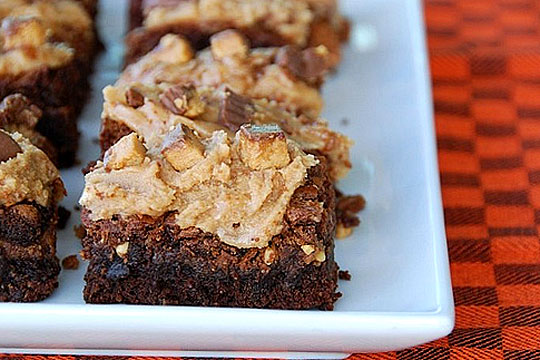 Raid the kiddies' trick-or-treat bags — or just go to the store — to find ingredients for grown-up goodies like Reese's Peanut Butter Cup Brownies.

Window To The Holidays

Do you have special recipes and food traditions for the holidays? Have you given or received a remarkably good — or bad — food gift? Share your best holiday food stories with Kitchen Window and the NPR Community here.

Susan Russo is a food writer in San Diego. She publishes stories, recipes and photos on her cooking blog, Food Blogga. When she isn't writing about her Italian family back in Rhode Island or life with her husband in Southern California, she can be found milling around a local farmers market buying a lot more food than two people could possibly eat.

Like many kids growing up in New England, I checked the forecast every day of the week leading up to Halloween. Rain or freezing temperatures could ruin trick-or-treating — a major disappointment in the life of an 8-year-old. With clear skies confirmed, I would put on my costume shortly after arriving home from school, then count down the hours until darkness descended and I could relieve the neighbors of their candy.

Though it's been 25 years since I have gone trick-or-treating, I still anticipate Halloween every October. That's why I created desserts featuring my favorite Halloween candy — good alternatives to the creepy-crawly eyeball cupcakes and bloody-finger pies that never really appealed to me.

Halloween is the perfect holiday: For a few precious hours, you can be the character you always wanted to be. More importantly, for a few precious days afterward, you can eat as many Twix bars as you can stand, and your mother lets you.

I remember one windy, frigid Halloween night when I was to become my favorite hero: Wonder Woman. I was devastated when my mother announced that I would be wearing my winter coat over my costume. Outwitting her, I wore my costume over my puffy pink coat. As I scampered from door to door, my costume began tearing, and by the end of the night was badly tattered.

I was able to distract myself by going over to Pinewood Drive, the street with the big houses known for giving out full-size candy bars. Bam. A king-size Snickers hit the bottom of my orange plastic pumpkin. I had to stop and center it, or my pumpkin would've lilted for the rest of the night. After that, it didn't matter how many Dum Dums or Milk Duds I got, or that my favorite costume was shredding — I had scored.

The tradition of giving treats to costumed children has roots in pre-Christian times, when the Celts had a festival called Samhain (pronounced Sah-ween) on Oct. 31, the eve of their new year.

Samhain celebrated the harvest in preparation for the harsh winter. It's when the Celts believed the spirits of those who had died the previous year could return to the living world. To honor the dead, animals were sacrificed, communal bonfires were lit, and gifts of food and drink were offered.

To prevent evil spirits from entering their homes, people carved scary faces into turnips and placed them in their windows or outside their doors.

To protect themselves from wandering evil spirits, people wore disguises and performed from door to door — a practice known as mumming — in exchange for food and drink.

As Christianity spread, the pagan Celtic tradition became All Saints Day, a day to commemorate all Christian saints. It was also called All Hallows Day, since "hallowed" meant holy. Over time, All Hallows Eve became Hallow Evening, or Hallow E'en, and finally Halloween.

With the 19th century influx of European immigrants, Halloween was introduced to America. Like the Celtic Samhain festival, Halloween was originally celebrated as a harvest festival. Over time, however, it became a night of ordained mischief and revelry.

It wasn't until after World War II that trick-or-treating became a well-established practice across the country. With the end of sugar rations, families felt free to give costumed children candy corn, Hershey's Kisses and Tootsie Rolls. By 2005, according to the National Confectioners Association, more than 80 percent of American households gave out candy to costumed children on Halloween.

Chances are, you'll have some candy in your house this Halloween to try these desserts. I designed them with hectic adult schedules in mind. They're easy to make; some can be made in advance, and none requires any special baking skills. The only necessary ingredient is affection for Halloween candy.

Each recipe features a classic Halloween candy — Heath bars, Reese's Peanut Butter Cups, Snickers and Mounds bars. Whether you go out and buy the key ingredients or simply ransack your child's Halloween bag (come on, you know you do), these desserts will make you feel like a kid again. 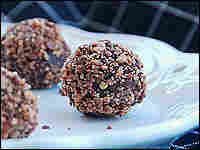 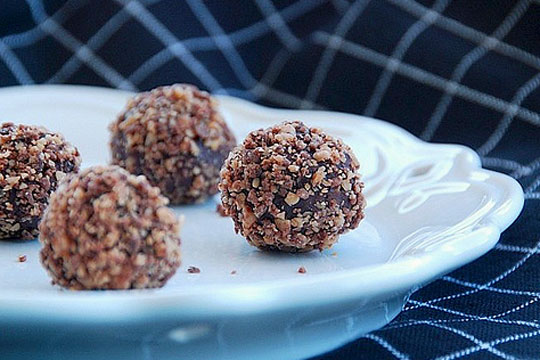 These are intensely rich and chocolaty. The best part is they can be made ahead, refrigerated and then popped into paper candy cups before your guests arrive.

In a small food processor, grind the pecans into bits. Put in a bowl and set aside.

Place chocolate in a medium metal bowl. In a small heavy-bottomed saucepan, bring cream to a simmer (tiny bubbles should appear around the edges). Pour over the chocolate and let stand for 3 minutes. Whisk until the chocolate is smooth and silky. Add the processed pecans and whisk until just incorporated. Cover bowl with plastic wrap and refrigerate for 3 hours, or until the truffle mixture is firm.

In the food processor, grind the Heath bars into bits. Put in a bowl and set aside.

Line two large baking sheets with waxed paper. Using a 1-inch melon baller, form a truffle and roll in your hands until round. Place on the lined baking sheet. Chilled truffles are easier to work with, so place the sheet of truffles in the refrigerator for about 15 minutes.

Drop one chilled truffle at a time in the bowl of crushed Heath bits. Roll the truffle in your hands, lightly pressing the Heath bits until they adhere. Place on a freshly lined baking sheet and chill for 1 to 2 hours, or until firm.

Truffles can be made 2 days ahead. To store, layer between pieces of waxed paper to prevent sticking, and place in an airtight container. Serve truffles on a plate or in candy-sized paper cups. 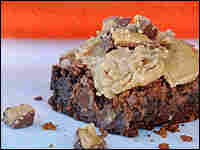 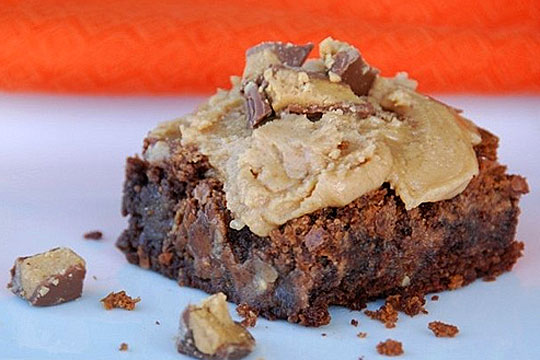 2 to 3 snack-size peanut butter cups, chilled then diced, for garnish

For the chocolate batter, melt butter and chocolate in a heatproof bowl over steaming water. Using a rubber spatula, stir until smooth. Remove from heat and cool slightly. Stir in the sugar. Mix flour, baking powder and salt in a small bowl, then stir into the chocolate mixture. Whisk in eggs and vanilla until the mixture is smooth. Pour half of the chocolate batter into the prepared baking pan. Tap the bottom of the pan on the countertop to even out the batter and to release any bubbles.

Pour remaining half of chocolate batter into the pan, tapping the bottom of the pan on the countertop to even it out. Add remaining peanut butter mixture, and again drag a spatula through the mixture until it is swirled into the chocolate batter.

Bake for 40 minutes, or until a toothpick inserted into the brownies comes out with a few crumbs on it. It should be moist, but not wet.

Set pan on a wire rack to cool for 15 minutes. Remove brownies from pan and allow to cool completely before frosting.

For the frosting, place the confectioners' sugar, creamy peanut butter and butter in a medium bowl. Beat with an electric mixer on medium-low speed until creamy. Add the heavy cream and beat on medium-high speed until fluffy and creamy.

Spread frosting evenly over the cooled brownies and garnish with diced candy pieces. Tip: Dip a sharp knife in warm water before slicing the brownies. 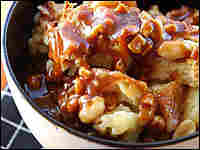 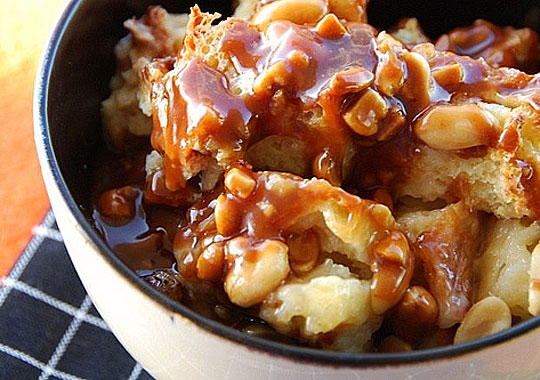 It's no wonder that Snickers is the most popular candy bar in the U.S. What's not to love about chewy nougat, silky caramel and crunchy peanuts all wrapped up in sweet chocolate? This comforting bread pudding is studded with chunks of Snickers and drowned in an outrageously gooey Snickers sauce. In case you're wondering, yes, this sauce is amazing on ice cream.

For the sauce, in a small heavy-bottomed saucepan over medium heat, combine chopped Snickers, heavy cream and brown sugar. Reduce heat to medium-low and allow sauce to gently bubble for about 5 minutes, or until thick and gooey, stirring occasionally. The sauce should adhere to the back of a spoon. Stir in the peanuts. Remove pan from heat.

Preheat oven to 350 degrees. Coat a 9- or 10-inch baking dish with cooking spray and set aside.

Place a sheet of aluminum foil under the baking dish to catch any sugary drippings. Bake for 40 to 45 minutes, or until the top is golden and crusty, and the middle is thick and moist. Cool slightly before serving warm or at room temperature. Lightly reheat remaining Snickers sauce before pouring over individual servings. 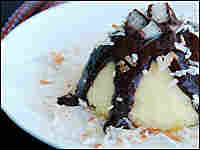 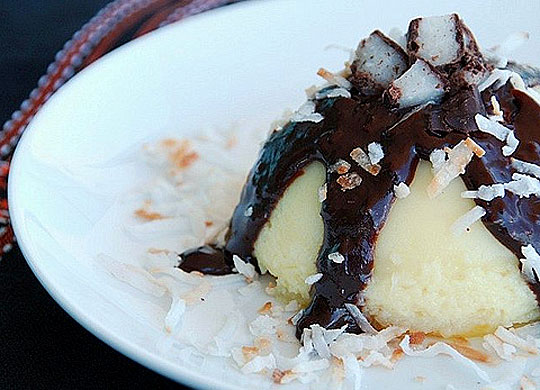 This is an ideal dessert for a dinner party. Despite its attractive presentation, it's simple to make and can even be prepared in advance. Lush custard is drizzled with a decadent dark chocolate sauce made from melted Mounds bars. Crunchy toasted coconut and chilled Mounds pieces are the only adornment needed.

Position a rack in the center of the oven and preheat to 350 degrees.

Coat 6 (3-inch-wide) ramekins (or other small baking dishes) with cooking spray and place on a baking sheet.

In a large bowl, whisk all custard ingredients except toasted coconut until smooth. Sprinkle the bottoms of the ramekins with the 1/2 cup toasted coconut. Divide the custard evenly among the ramekins. Bake for 25 minutes, or until golden brown and puffy. Cool on a rack.

To make the chocolate sauce, place heavy cream in a small heavy-bottomed saucepan over medium heat. Bring to a simmer (tiny bubbles should appear around the edges). Whisk in the sugar, chopped Mounds bars and chopped chocolate until creamy. It will be slightly bumpy because of the coconut in the candy. Remove from heat.

Custards can be served either at room temperature or slightly chilled. Invert each custard onto a serving plate. Drizzle with chocolate sauce, and garnish with candy pieces and toasted coconut.

Leftover chocolate sauce can be stored in an airtight container in the refrigerator for several days. The sauce will thicken after having been refrigerated, so before using, slowly re-heat, adding teaspoonfuls of heavy cream to thin it out as necessary.