Accessibility links
Gunman Left Note; Past Writings Called 'Troubling' Seung-Hui Cho, a 23-year-old South Korean national, has been identified as the gunman who killed at least 30 people at an engineering building at Virginia Tech Monday, then turned the gun on himself. He was a senior English major who lived on campus. 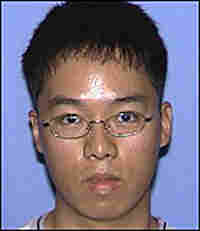 Investigators, reporters and casual acquaintances are offering glimpses of the dark and lonely world of Seung-hui Cho, the young man police blame for killing at least 30 people at Virginia Tech Monday.

A former classmate, Ian MacFarlane said of the shootings: "My first thought was about my friends, and my second thought was 'I bet it was Seung Cho.'"

A former roommate, Xu Chen, remembered that after Cho's parents came for a visit, his mother took the roommate aside. "Help him," she said.

She was talking about her son, who authorities said was hospitalized in 2005 for depression and was accused in the same year of stalking two young women on the Virginia Tech campus.

Cho was 23 when he took his own life Monday after firing repeatedly at students and professors at Norris Hall, a classroom building on the Blacksburg, Va., campus.

He was a South Korean national who immigrated to the United States when he was 8 years old. The name he used is an Americanized version of his Korean name.

According to the university, Cho was a senior English major who lived at Harper Hall on campus. He was a resident alien, with a family address in Centreville, Va.

Steven Flaherty, superintendent of the Virginia State Police, said investigators executed a search warrant in Cho's dorm room and are in the process of evaluating evidence.

Cho's writing triggered concern among professors, and he left behind a note in which he railed against "rich kids."

Cho's former classmate Julie Poole told the Associated Press that on the first day of a British literature class last year, Cho refused to speak when students went around and introduced themselves. She said, "He never talked."

Lucinda Roy, a long-time member of the English faculty at Virginia Tech, had Cho as a student in a creative writing class. She said Cho seemed so depressed and angry that she contacted the police, student affairs and other university officials, and eventually referred him to counseling.

"All my alarms went off," Roy told NPR. She said she felt a personal responsibility to reach out but that the authorities she contacted believed their hands were legally tied unless the student made threats. Roy refused to disclose what she found in Cho's writings, on the advice of police.

The English department chairwoman, Carolyn Rude, also told the Associated Press that Cho had been referred to the university's counseling service.

"There was some concern about him," Rude said. "Sometimes, in creative writing, people reveal things, and you never know if it's creative or if they're describing things, if they're imagining things or just how real it might be. But we're all alert to not ignore things like this."

Screenplays purportedly written by Cho alarmed some of his classmates.

"When we read Cho's plays, it was like something out of a nightmare," said former classmate Ian MacFarlane, in a blog entry quoted by AP. "The plays had really twisted, macabre violence that used weapons I wouldn't have even thought of." MacFarlane added that he and other students worried "...about whether he could be a school shooter."

NPR has learned that Cho left a note, but it's not clear whether it was handwritten or on a computer. In that note, he reportedly spoke about "rich kids" and "debauchery."

According to U.S. Citizenship and Immigration Services, Cho immigrated to the United States from South Korea in September 1992. The family had other relatives already in the United States and petitioned to join them, so they all arrived as legal permanent residents.

Cho attended Westfield High School in Fairfax County, Va., which also was attended by at least two of his victims, Reema Samaha and Erin Peterson. There is no indication so far that Cho knew or targeted the two young women, who attended the school three years after Cho.

Cho's father once worked as a dry cleaner and his mother is employed at the cafeteria of Centreville High School in Va., according to NPR reports.

Ballistics tests have confirmed that one of the two guns recovered from Norris Hall, where at least 30 people were killed, was also used in the shootings at West Ambler Johnston Dormitory. The dorm was the site of the first two shootings, which occurred around 7:15 a.m. Monday — two hours before the attacks at Norris Hall.

A spokesman for South Korea's Foreign Ministry said, "We are in shock beyond description. We convey deep condolences to victims, families and the American people."

The spokesman added that South Korea hoped that the tragedy would not "stir up racial prejudice or confrontation."

This link connects to a page on AOL News providing access to two short plays allegedly written by Seung-hui Cho. AOL News obtained them from an employee who had been Cho's classmate in a creative-writing course. Please note that the plays contain graphic and disturbing images, and are heavily laced with profanities.