A jury has found Republican Sen. Ted Stevens guilty of lying about gifts from an oil company in Alaska. Alaska Public Radio's Libby Casey, who's just outside the courtroom, talks with Alex Chadwick about the verdict. 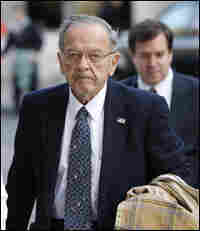 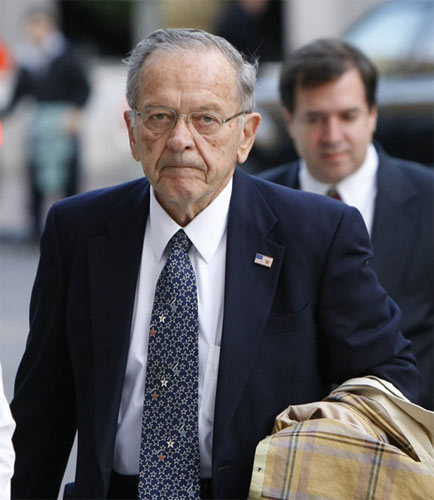 Sen. Ted Stevens (R-AK) arrives at federal court Monday in Washington, D.C., for the day's proceedings at his trial.

The verdict, coming barely a week before Election Day, added further uncertainty to a closely watched Senate race. Democrats hope to seize the once reliably Republican seat as part of their bid for a filibuster-proof majority in the Senate.

Unbowed, even defiant, Stevens accused prosecutors of blatant misconduct and said, "I will fight this unjust verdict with every ounce of energy I have."

The senator, 84 and already facing a challenging re-election contest next Tuesday, said he would stay in the race against Democrat Mark Begich. Though the convictions are a significant blow for the Senate's longest-serving Republican, they do not disqualify him, and Stevens is still hugely popular in his home state.

Stevens was convicted of all the charges he faced of lying about free home renovations and other gifts from a wealthy oil contractor. Jurors began deliberating last week.

The senator showed no emotion as the jury foreman said "guilty" seven times. After the verdicts, Stevens sat in his chair and stared at the ceiling as attorney Brendan Sullivan put his arm around him.

Stevens faces up to five years in prison on each count when he is sentenced, but under federal guidelines he is likely to receive much less prison time, if any. The judge originally scheduled sentencing for Jan. 26 but then changed his mind and did not immediately set a date.

The monthlong trial revealed that employees for VECO Corp., an oil services company, transformed Stevens' modest mountain cabin into a modern, two-story home with wraparound porches, a sauna and a wine cellar.

The Senate's longest-serving Republican, Stevens said he had no idea he was getting freebies. He said he paid $160,000 for the project and believed that covered everything.

He had asked for an unusually speedy trial, hoping he would be exonerated in time to return to Alaska and win re-election. He kept his campaign going and gave no indication that he had a contingency plan in case of conviction.

Despite being a felon, he is not required to drop out of the race or resign from the Senate. If he wins re-election, he can continue to hold his seat because there is no rule barring felons from serving in Congress. The Senate could vote to expel him on a two-thirds vote.

"Put this down: That will never happen — ever, OK?" Stevens said in the weeks leading up to his trial. "I am not stepping down. I'm going to run through, and I'm going to win this election."

Stevens' conviction hinged on the testimony of Bill Allen, the senator's longtime drinking and fishing buddy. Allen, the founder of VECO, testified that he never billed his friend for the work on the house and that Stevens knew he was getting a special deal.

Stevens spent three days on the witness stand, vehemently denying that allegation. He said his wife, Catherine, paid every bill they received.

Living in Washington, thousands of miles away, made it impossible to monitor the project every day, he said. Stevens relied on Allen to oversee the renovations, he said, and his friend deceived him by not forwarding all the bills.

Stevens is a legendary figure in Alaska, where he has wielded political influence since before statehood. His knack for steering billions of dollars in federal money to his home state has drawn praise from his constituents and consternation from budget hawks.

Stevens is the fifth senator convicted of criminal charges. The last previous one was Republican David Durenberger of Minnesota, who was indicted in 1993 on charges of conspiring to make fraudulent claims for Senate reimbursement of $3,825 in lodging expenses. He later pleaded guilty to misdemeanor charges and was sentenced to one year of probation and a $1,000 fine.

The jurors in the Stevens trial left the court without comment.

Said U.S. District Judge Emmet Sullivan: "The jurors have unanimously told me that no one has any desire to speak to any member of the media. They have asked to go home and they are en route home."

The jurors had been shuttled to and from the proceedings each day by court officials.