Accessibility links
Charlotte, N.C., Struggles As Big Banks Founder A major banking center's biggest employers get caught up in the world's financial mess. Now, the city and its residents must deal with the aftermath.

The sixth of an occasional series called "The Money Map," which looks at how global economic forces are shaping the economies of America's hometowns. 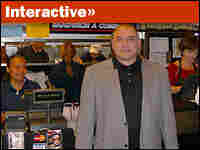 Wachovia Corp. recently broke ground on a new skyscraper in downtown Charlotte, N.C. It was the latest mark on a skyline dominated by big banks. But financial institutions around the world have since struggled — and in October, Wachovia was swallowed up by out-of-town competitor Wells Fargo & Co.

"If they were to walk away today, there would be — quite literally — a gaping hole in downtown Charlotte," WFAE reporter Julie Rose tells Steve Inskeep.

Wachovia is Charlotte's second-largest employer, and the Wells Fargo deal could bring thousands of layoffs. City resident Rick Eudy, who works at Wachovia, says his industry's troubles have led to steep declines in his retirement savings, but adds: "I'm not planning to jump or leave because, basically, there's no place to jump to or go to."

"Many businesses exist here to support our banks. So, there will be a ripple effect," says Charlotte Mayor Pro Tem Susan Burgess.

That's true for Konstantine Zitsos' business. He owns a diner in the Wachovia building. "If there's a loss," he says, "then we make adjustments with our payroll. If the people aren't downtown, then you have a problem."

Still, Zitsos says Wachovia's financial troubles don't mean the end of downtown Charlotte. Bank of America is still based there. That bank is actually growing in size after its recent acquisition of Merrill Lynch.