Accessibility links
Editorial Cartoonists Review Election '08 Editorial cartoonists Mike Luckovich and Mike Peters have mixed feelings about the looming presidential vote. As the pair looked back on their recent work, they acknowledged a worry: It's not easy to make fun of Barack Obama, the front-runner. 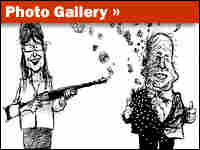 One thing Barack Obama and John McCain have not had to worry about during the long presidential campaign is making caricatures of themselves.

Luckily for them, that's someone else's job: editorial cartoonists.

Mike Luckovich of The Atlanta Journal-Constitution and Mike Peters of The Dayton Daily News recently joined Renee Montagne to look back at some of the memorable moments of the race between Obama and McCain.

The satirists' themes are like a history of the campaign: the candidates' early struggles to define themselves; the emergence of Sarah Palin; and America's increasingly gloomy economy.

And both are worried that a victory for Obama could mean hard times for cartoonists.

"It's going to be the end of cartooning as we know it," Peters said.

"But maybe Biden will taken up the slack," Luckovich said.

As for where their cartoon ideas come from, Peters said that he often gets inspiration while driving around, or while listening to music.

"I tend to come up with my ideas when I'm just sitting, and really thinking," Luckovich said. "I might get the germ of an idea when I'm driving around."

And if all goes well, the cartoonists manage to communicate through a single image an idea that could be very difficult — or even taboo — to get across in words.

"I prefer to think of myself as a 9-year-old," Luckovich said.