Accessibility links
Democracy In Thailand On Life Support Thailand's democracy appears to be on life support as the embattled prime minister clings to office. That's despite calls for his resignation from political opponents and, indirectly, the military. It has conducted 18 coups, or coup attempts, since Thailand became a constitutional monarchy in 1932.

Thailand's democracy appears to be on life support as the embattled prime minister clings to office. That's despite calls for his resignation from political opponents and, indirectly, the military. It has conducted 18 coups, or coup attempts, since Thailand became a constitutional monarchy in 1932. 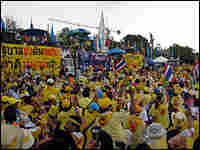 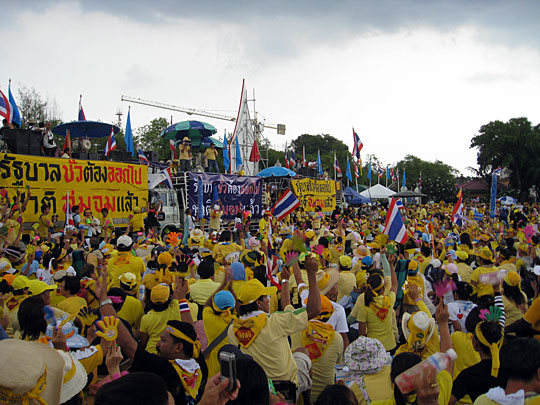 People's Alliance For Democracy protestors have been occupying the prime minister's compound in downtown Bangkok for two months.

Next we're going to check up on democracy's progress, or the lack of it. Yesterday we heard about the surprising success of democracy in Indonesia. This morning we'll visit a Southeast Asian democracy that is more fragile. In order to call Thailand a democracy at all, you may have to overlook the military which since the 1930s has repeatedly staged coups or coup attempts, 18 times. Then there's the current prime minister who's clinging to office. NPR's Michael Sullivan reports from Bangkok.

MICHAEL SULLIVAN: In the theater of the absurd that is Thai politics today, this is where Thailand's prime minister goes to work each morning.

Unidentified Announcer: Attention please. As of June 2007, any containers of liquid, aerosols or gels must be packed in checked baggage before...

SULLIVAN: Bangkok's former international airport has been doing double-duty for about two months now, handling domestic flights and the affairs of state. As the temporary office of the prime minister, he can't get to his real office downtown, the grounds there occupied since late August by protesters from the so-called People's Alliance for Democracy.

SULLIVAN: The protesters' camp has a carnival-like atmosphere most days and free food, too. And their demands are pretty simple. That the current government resign. Krayona Kalabawan(ph) is 65 and a retired teacher from Bangkok. He says the current government bought its way into office and is simply a proxy for the deposed prime minister, Thaksin Shinawatra.

Mr. KRAYONA KALABAWAN (Retired Teacher, Bangkok, Thailand): They have a lot of corruption, and we need new political system, not a vote buyer. This one, we try to pressure them. Have the new election, or something else is better.

SULLIVAN: But here's the problem. The current government was democratically elected just nine months ago, which makes the People's Alliance for Democracy anything but.

Ms. SIDNEY JONES (Southeast Asia Project Director, International Crisis Group): It's a retrograde and about as antidemocratic a movement as you can get.

SULLIVAN: Sidney Jones of the International Crisis Group says Thai civil society, once considered a pillar of democratic politics, is now part of the problem.

Ms. JONES: It's as though when someone gets elected that they don't support, they want to oust that person by undemocratic means and put in a system with safeguards so that someone not to their liking can't be chosen.

SULLIVAN: And even if the government were to resign and new elections were held, Thaksin-friendly parties would undoubtedly win again in a landslide. And for good reason, says political analyst Thitinan Phongsutthirak of Bangkok's Chulalongkorn University.

Mr. THITINAN PHONGSUTTHIRAK (Political Analyst, Chulalongkorn University, Bangkok): They offered the so-called populist policy agenda which addresses the grievances and the needs and the expectations of the rural majority of Thailand.

SULLIVAN: In the rural heartland, far from the capital, Odopen Mongsom(ph) raises pigs in the village of Sanpatong. She bought her pigs three years ago with money from Thaksin's village loan program, one of many populist policies put in place during his rule.

SULLIVAN: The village loan program, keep health care for the poor, and Thaksin's war on drugs made him hugely popular among rural Thais like Odopen, long ignored by the central government in Bangkok. Odopen says she doesn't care about the allegations of corruption. All politicians are corrupt, she snorts. At least Thaksin delivered. And that's what the current political crisis is really about.

Mr. PHONGSUTTHIRAK: Thaksin opened up Thailand, and he really changed the face of Thai politics.

SULLIVAN: And that change is responsible for the current stand-off in Bangkok, what analyst Thitinan Phongsutthirak calls a titanic tussle for Thailand's soul, a struggle between the traditional political elite - what he calls the holy trinity of the military bureaucracy and the monarchy - versus the populist political machine of former Prime Minister Thaksin.

Mr. PHONGSUTTHIRAK: The income redistribution, the cluster development projects, the structural reforms, bureaucratic reforms, he offered a way for Thailand to go forward into the 21st century, to handle and grapple with globalization and its challenges. And I think that Thaksin became so popular, his regime was so threatening, that in the end these traditional institutions put it down, overthrew him.

SULLIVAN: And yet two years later, Thaksin's political allies are back in government, much to the chagrin of the traditional Bangkok-based elite. And that's why the so-called People's Alliance for Democracy is on the streets.

Mr. PHONGSUTTHIRAK: They want to go back - turn back the clock a bit, maintain, retain the prerogatives of the bureaucracy, military, the monarchy, and so on, to set up - design a different kind of political system that would dilute the vote, the influence of the majority of the rural vote.

SULLIVAN: A system in which many lawmakers would be appointed rather than elected. Rural voters, some PAD leaders insist, are too easily swayed by promises of cash and aren't smart enough to vote responsibly.

SULLIVAN: Pipap Tangchai says he believes in the idea of one man, one vote. But he says most Thais lack the information necessary to make an informed decision. The PAD claims their so-called new politics will change things and make it easier to remove corrupt politicians from office. But the new politics sounds an awful lot like Thailand's old politics to some. Thanet Aphornsuvan, dean of liberal arts at Bangkok's Thammasat University, remembers Thailand's military and military-backed governments of the '70s, '80s and early '90s. And he smells a rat.

Mr. THANET APHORNSUVAN (Dean of Liberal Arts, Tameside University, Bangkok): I mean, any controlled democracy is unnatural. And in the end I still believe that power tends to corrupt - absolute power corrupts absolutely. So you have this group of people control the power, and soon they are going to tighten their grips over and over. And that's the end, I think.

SULLIVAN: For the past decade or so, Thailand's democracy and its 1997 constitution were the envy of, and a model for, others in the region, like Indonesia. Now Thailand finds itself hurdling headlong towards its past and perhaps a bloody confrontation between the forces of the traditional elite versus the newly enfranchised and emboldened rural majority. Some believe the situation won't play itself out until one of the country's most influential and beloved political actors leaves the stage.

Ms. JONES: I think we have to wait in Thailand and see what happens after the king.

Ms. JONES: I think too much emphasis has been placed repeatedly on the ability of the king to come in and solve problems. And Thailand's not going to be able to really test its capacity for democratic governance until we have the succession.

SULLIVAN: Deposed Prime Minister Thaksin, meanwhile, remains in exile in Great Britain a fugitive facing several charges of corruption. Charges he denies. Some say the controversial and confrontational Thaksin might still be in power had he not gotten so greedy and paid a little more respect to the monarchy in particular. Others say he may yet outwit them all and return, though it's not clear what the political landscape will look like when and if he does. Michael Sullivan, NPR News, Bangkok.