Accessibility links
'Internal Chatter' Limits Multitasking As People Age Research shows that the human brain reaches its multitasking peak in our 20s or 30s. As we age beyond that, an increase in "internal chatter" makes the brain work harder to suppress distractions and maintain focus. 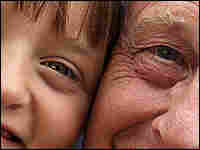 As we age, the region of our brain that helps us multitask develops, reaching a peak in our 20s or 30s. iStockphoto.com hide caption 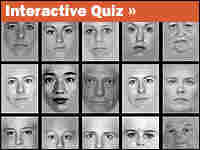 Click on the interactive to take this memory test from the Gazzaley lab that uses distractions to see how well brains of different ages maintain focus. Kathleen Masterson/NPR hide caption

To read more research about how your brain "switches gears" between tasks, see the Lustig lab.

Check out the Gazzaley lab at the University of California, San Francisco to learn more about their neuroscience research.

It's not every brain scientist who explains her research using Shakespeare. But University of Michigan psychology professor Cindy Lustig describes brain development over a lifetime as a correlation with Shakespeare's "seven ages of man."

Using behavioral tests and brain scans, Lustig and her collaborators, Drs. Randy Buckner and Denise Head, study how age affects the brain's ability to multitask. While the young child's brain is only capable of focusing on one thing at a time, as the brain develops it is able to switch between tasks quite quickly, reaching a multitasking peak in the 20s or 30s, says Lustig. Beyond that, the brain experiences "internal chatter" and has to work a lot harder to suppress distractions and maintain focus.

Early in life, Lustig says, we have a phenomenal ability to ignore everything except what's right in front of us.

Young children have trouble taking on more than one task at a time. Parents often exploit this weakness. When a toddler wants Big Brother's favorite truck, they redirect him toward that cool race car in the corner.

This can work on a 1-year-old. But by the time children reach the age of 9 or 10, their brains can take on a second task without forgetting the first one.

As children grow up, the part of the brain that keeps you focused on a task — the frontal cortex — develops.

For instance, Lawrence, a 9-year-old participant in one of Lustig's multitasking experiments, takes a test in which he performs different tasks like identifying shapes. He does fine for his age, but he makes more mistakes than young adults do in tests that require rapid switching from one task to another.

Lawrence is starting to multitask a little at home. He says he does his homework — including spelling words, reading stories and writing summaries — while watching television. He can do this because his brain has developed a lot since he was 2.

Lustig points to an image on her computer to show precisely where the change in Lawrence's brain is taking place.

"So you're seeing the frontal cortex, and this is the part of the brain that we think is involved in really keeping you focused on the task, keeping the task in mind," says Lustig.

This brain region is critical when you're trying to flip back and forth between tasks.

But brain scans show that the frontal cortex still isn't fully developed in someone Lawrence's age, which is why he makes more mistakes on multitasking tests than do young adults.

Those mistakes diminish as their frontal cortex matures during the teen years. And then they reach the age Shakespeare describes in terms of "sighing lovers" and swearing soldiers.

The brains of college-age people are quite adept at multitasking exercises; they have no trouble zipping back and forth between tasks and keeping track of the different rules that apply to different tasks.

College student Haille Zucker, 20, scored 100 percent on the multitasking exercises researchers asked her to do on a computer. The test instructed Zucker to evaluate shapes: If the shape was orange she was to tell which side was taller; for gray shapes, she had to say which side had more bumps.

Even when Zucker goes really fast, her brain can flip from the orange rule to the gray rule without a hitch.

Zucker is probably near her peak for multitasking ability. Lustig says that's because the brain of a 20-something has an adult's ability to oversee several tasks while retaining a child's ability to easily tune out distractions.

But those skills will diminish.

Older And Wiser, But More Context

Mary Bailey, 65, says she's old enough to have noticed a decline in multitasking ability. When she was in her 20s, she was an Army nurse at a field hospital in Saigon:

"When the red alerts went off, we were faced with having 40 or 50 people come in and you needed to triage. And we had to make notations. We had long shelf paper outside the operating room suite. We had to take care of people," says Bailey.

"Those who were close to dying, we sent to the chapel. The ones that could be helped, we would medicate and they would be sent off. It was mind-boggling what you had to remember and what you had to do. And you had to do it. Other people's lives depended on it," she says.

Today, her brain doesn't switch tasks quite as fast as it once did. As we age, some parts of the brain just slow down a bit.

Scans of Bailey's brain would show that when she does several tasks, her frontal cortex has to exert more effort than a younger brain to maintain focus.

But Bailey says there's another, more important reason. In her 20s, she wasn't distracted by thoughts about things like the nature of war. Today, she says, it would be hard to suppress those thoughts if she were still triaging people wounded in combat.

That may sound more like philosophy than neuroscience. But Lustig says it's not.

Lustig calls it the brain's "internal chatter." It may include mundane things like items on a grocery list or deeper musings on subjects like the morality of war. The older we get, the more of these thoughts we have rattling around our brains.

In the lab, Lustig scans the brains of people of all ages as they complete mental tasks. In the brain scans, areas of blue show where the brain has shut down internal chatter.

Lustig holds up a scan of a child's brain; lots of blue indicates that child is focusing intently and effectively shutting down internal chatter.

A scan of middle-aged adults shows considerably less blue on the screen. Lustig pulls up scans of grandparent-age brains and there is no blue at all — meaning there is lots of internal chatter that makes multitasking more difficult.

But is Shakespeare right? Does old age necessarily mean the brain returns to an infantile state?

Young brains and old brains both have trouble multitasking — but for completely different reasons. Children struggle to keep more than one thing in mind at any given moment. Older people have trouble limiting the number of thoughts in their heads.

Lustig says it's worth noting that when it comes to some mental abilities, older adults actually get better.

Also, many older people decide that multitasking isn't what they want to do, anyway.

Bailey, the former Army nurse, says she and her husband have moved to a smaller house so they don't have to think about so many things. And they're not sure they want to be connected to the Internet all the time.

"If you simplify your life and give your energy to what's most important, it seems to me that's what makes sense in the aging process," Bailey says.

Or, as Shakespeare put it: "To thine own self be true."