Accessibility links
NCAARP? Old Coaches Don't Quit When it comes to coaching, it seems 80 is the new 60. And today's coaches — Joe Paterno and Bobby Bowden, to name two — are working far past the retirement age of legends like Bear Bryant. Frank Deford sees the pattern in other sports, as well. 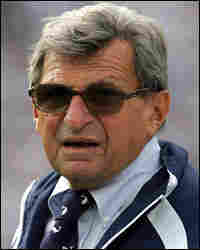 Seems to me like there are an awful lot of old folks in sports today. You noticed? I don't mean your decrepit 30-something-year-old players, who are invariably called "aging veterans," but the actual AARP geezers who are still breathing and pulling the strings. Senior citizens, oldsters, who are — ugh — "many years young," graybeards who are — ugh — "up in years."

If Penn State keeps winning, Old Joe Paterno — in the vernacular, JoePa, with the emphasis on the latter — will be coach of the national champions at the age of 82. But then, Pa can't stop coaching. Or Old Bobby Bowden, who is merely 78 and has his Florida State team ranked No. 15, could pass him for most career wins.

But look back to olden times. What aged wimps. Old Pop Warner — Pop! — was 67 when he decided he'd better hit the rockin' chair. Old Bear Bryant was such an ancient 69 when he retired, he went to that great gridiron in the sky only a few weeks later. Old Woody Hayes was 65 when he was overcome with a moment of pigskin dementia, punched an opposing player, and had to be put out to pasture. Sunset came earlier back then.

See, it ain't easy for the elderly coaching under the big tent. Terry Francona, manager of the Red Sox, is a pup of 49. He moans that it takes him the whole off-season just to get ready again to ride chartered airplanes, cogitate and spit.

"This job — sometimes it almost sucks the life out of you," Young Terry whines.

Hey, buck up, kid. Look who's managed the Phillies to the World Series — Old Charley Manuel, a war baby of 64. The general manager, Old Pat Gillick, is a Depression Baby of 71. And the Phillies had to beat Old Joe Torre's Dodgers to get to the Series.

The commissioner of baseball is Old Buddy Selig, who is 74. Imagine being called Buddy when you're 74. But, another three years and change, and Selig passes Kenesaw Mountain Landis as the oldest commissioner on record.

Now basketball: Old Lute Olsen, age 74, quit as the coach at the University of Arizona the other day, but then he had a good excuse. He's engaged to a 47-year-old woman. A man's gotta choose.

But here comes Old Larry Brown, taking on his 10th different professional team in Charlotte at age 68. Talk about reinventing yourself at twilight time.

And the NBA has developed a wonderfully dear system of having aged former head coaches serve as wise-men assistants, the eminences grise of the staff. Old Tex Winter is still a consultant with the Lakers, a whopping 86 years old.

Sometimes these days, sports looks like an assisted living facility — or the United States Senate.