Accessibility links
'Inverted Jenny' Stamp On Auction Block The stamp — which features an upside-down biplane — will be sold this week by the Robert Siegel Auction Galleries in New York City. Though a similar stamp sold for nearly $1 million last year, this one is not centered and is not expected to fetch as much. 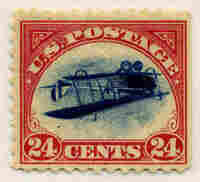 In 1918, stamp collector William Robey bought a sheet of 100 stamps for $24 at a Washington D.C., post office. The sheet featured what turned out to be a very valuable mistake. He sold the "Inverted Jenny" — named for the upside-down biplane — stamps for $15,000. hide caption 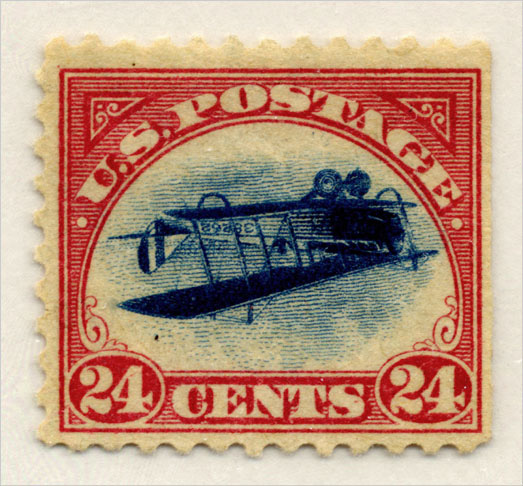 In 1918, stamp collector William Robey bought a sheet of 100 stamps for $24 at a Washington D.C., post office. The sheet featured what turned out to be a very valuable mistake. He sold the "Inverted Jenny" — named for the upside-down biplane — stamps for $15,000.

Many of us who collected stamps as kids were drawn by their beauty and variety. But for real collectors, it's the rare stamp — the mistake — that gets the excitement and the money.

At Robert Siegel Auction Galleries in New York — the largest stamp auction house in the country — there's a three-day auction of early American stamps that includes the most famous among them: the "Inverted Jenny."

It is a red and blue stamp with an upside-down image of a Curtiss JN-4H biplane.

It was in 1918 that stamp collector William Robey went to the New York Avenue post office in Washington, D.C., to buy a sheet of the first airmail stamps. He paid $24 for 100 stamps and was handed a sheet of stamps that featured the upside-down aircraft. It's the only sheet with the mistake to survive.

A year ago, the Robert Siegel Auction Galleries (no relation to the NPR host) sold a perfect inverted Jenny for close to $1 million. The stamp at this auction is expected to fetch much less because it is not perfectly centered.

Scott Trepel, the president of the auction house, says the Franklin stamp could go for between $500,000 and $1 million. He says that the limited number of these stamps and the wealth and determination of many collectors cause the price to rise to "new and much higher levels."

Trepel says it's unclear how the uncertain economy will influence auctions in the future. Inflation could cause stamp prices to rise; a lack of easy money could cause them to fall.

It's almost impossible for a new collector to amass a complete collection of American stamps, Trepel says. Such a collection would now be worth between $15 million and $20 million.

The day before the auction, several collectors and dealers peruse little black books filled with stamps, looking at them with a magnifying glass under bright lamps.

Richard Sachs, a dealer from Scarsdale, N.Y., is looking at an upside-down stamp of a locomotive printed in 1869.

"They are the first U.S. stamps that didn't have boring president's heads on them. They actually had pictures," Sachs says.

He started collecting as a kid and started seriously collecting in high school.

Sachs says he thinks the hobby "attracts people with obsessive personalities and a certain mentality that people who don't collect can't understand."

Some versions of this story incorrectly described the "Inverted Jenny" as "a red and black stamp." It's actually red and blue.