Accessibility links
Studies Question Shelf Life Of Donor Blood Blood banks store freshly donated blood for up to six weeks before it is considered outdated and discarded. But patients who receive transfusions of blood older than two or three weeks may suffer adverse effects, studies suggest. 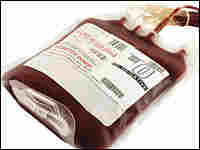 Blood banks store freshly donated blood for up to six weeks before it is considered outdated and thrown away. But some recent studies suggest that people who receive transfusions of blood older than two or three weeks may suffer adverse effects.

Researchers presented the newest of these studies at the annual meeting of the American College of Chest Physicians this week in Philadelphia.

They looked at infections suffered by 422 patients hospitalized in the intensive care unit at Cooper University Hospital in Camden, N.J., which is affiliated with the University of Medicine and Dentistry of New Jersey and the Robert Wood Johnson Medical School.

Some patients received transfusions with packed red blood cells that had been donated at least 29 days earlier — well within the allowable shelf life. Others received fresher red blood cells, stored 28 days or less.

Patients who received "older" blood were three times as likely to have suffered infections of the bloodstream, respiratory system, heart valves and other organs.

"We were disturbed, but not surprised by the findings," says Dr. David Gerber, who led the study.

So far, the studies have focused on transfusions of red blood cells, not other blood products. Gerber says there's biological reason to think that older red blood cells may lead to a higher infection risk, because as they break down, they release chemicals that can suppress a transfused patient's immunity.

The New Jersey study is not the first to suggest a risk from transfusing blood that's nearing the end of its shelf life. In March, the New England Journal of Medicine published a Cleveland Clinic study of 6,000 patients who received transfusions after heart surgery.

Critics of that study say the Cleveland researchers might have missed important factors unrelated to transfusions that could explain why patients in the older-blood group did worse.

Several other studies on the issue have produced conflicting results.

Experts say none of this proves blood that is less than fresh poses a real danger to the millions of patients who get transfusions. In the New Jersey study, for instance, the patients who got older blood didn't have discernibly higher death rates or longer hospitalizations.

Dr. Darrell Triulzi, a pathologist at the University of Pittsburgh, is on the board of trustees of the American Association of Blood Banks. It's quite possible, he says, that patients who get transfusions are more likely to have complications just because they're sicker. The research done so far can't rule that out.

The American Red Cross, which operates the nation's largest blood collection system, says the New Jersey study "highlights a need for controlled studies on the effect of the age of blood on patient outcomes."

In fact, that's beginning to happen. The National Heart, Lung and Blood Institute is launching a study that will enroll 1,400 patients undergoing elective heart surgery. Those who need transfusions will be randomly assigned to two groups. One group will get blood donated no more than 10 days earlier. The other group will get blood donated at least three weeks earlier.

The study will look at the number of deaths in each group, as well as whether more people in one group or another suffer from damage to their kidneys, lungs or other organs. But it won't evaluate differences in infection rates. Study results won't be available for several years.

Canadian health authorities are also planning a randomized trial on the age of blood in intensive care patients.

Until the answers are in, experts say there's nothing that patients can do if they're concerned about the age of blood that might be infused in their veins. For one thing, blood banks require hospitals to transfuse the oldest blood first, to minimize the chance that blood will need to be thrown out.

"It would be unreasonable" for patients to ask for the freshest blood, says Dr. Mark Rosen of Beth Israel Medical Center in New York City, "because blood is still in limited supply. We're never going to be in a world where we have fresh blood on demand."

In any case, experts say, the risk of not having a transfusion when it's needed is far higher than the still-unknown risk of complications from older blood.

But Rosen says there is something that can be done to minimize whatever risk there might be in older blood: transfuse less blood in general. "Doctors should be circumspect in writing orders for transfusion," he says.

This is already being done in some hospitals and by some doctors, in large part because of the chronic shortage of donated blood. Rosen and other experts say there's lots of evidence that it is safe to allow patients' hemoglobin levels — the oxygen-carrying capacity of blood that depends on red cells — to dip below normal, as long as the patient's condition is stable and there's no sign of internal bleeding.