Accessibility links
Some Republicans Lukewarm On A McCain Victory With less than a week to go before Election Day, John McCain and Sarah Palin are battling furiously to stage a come-from-behind victory. But many Republicans are bracing for big losses in the White House and Senate — and many are already looking beyond McCain regardless of whether he becomes president.

Listen
Some Republicans Lukewarm On A McCain Victory 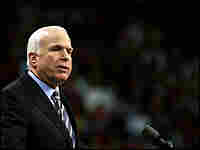 Some Republicans wonder whether a John McCain loss might help set the stage for a "Republican renaissance," one observer said. Logan Mock-Bunting/Getty Images hide caption 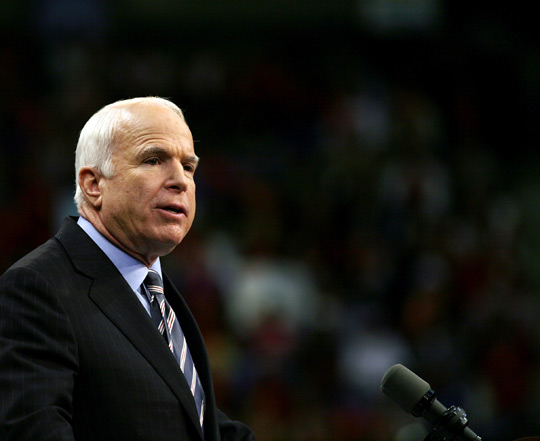 Some Republicans wonder whether a John McCain loss might help set the stage for a "Republican renaissance," one observer said.

With less than a week to go before Election Day, John McCain and running mate Sarah Palin are battling furiously to stage a come-from-behind victory. But many Republicans are bracing for big losses in both the White House and Congress — and many are already looking beyond McCain regardless of whether he becomes president.

Rush Limbaugh recently summed up the level of enthusiasm among conservatives for a McCain presidency.

But some Republicans are throwing in the towel, says Jim Brulte, the former leader of his party's caucus in the California State Legislature.

"People who are already planning for the future wonder if a loss may not be the necessary bloodletting to help set the stage for a Republican renaissance," Brulte says.

He still hopes McCain can beat the odds — but he knows it's always easier for an opposition party in Congress to pick up seats in midterm elections, in 2010.

Although he isn't rooting for big Republican losses either, Corallo says it would be just punishment for abandoning core conservative principles. And he cites the $700 billion Wall Street bailout as exhibit No. 1.

"I think that what you have to look at right now is the bailout. That has become the crucible through which the Republican Party will be viewed by its members," Corallo says.

Michael Gerson, a former speechwriter for President Bush, says he is not looking forward to the Republican post-election conversation.

"Usually, a loss results in a circular firing squad of recrimination and anger — not a healthy discussion of the directions of the future," Gerson says. "And the reality is that we're already beginning to see that right now."

The debate has already begun. The first shot was fired by someone who is not an active Republican partisan, but who is still respected within the party: former Secretary of State Colin Powell.

"I also believe that on the Republican side over the last seven weeks, the approach of the Republican Party and Mr. McCain has become narrower and narrower," Powell said earlier this month on NBC's Meet the Press as he endorsed Barack Obama.

"I have some concerns about the direction that the party has taken in recent years. It has moved more to the right than I would like to see it, but that's a choice the party makes," Powell said.

Gerson shares some of those concerns. He says the change began in tandem with the decline of Bush's political fortunes.

Corallo, the strategist, sees it differently. "There is a struggle right now between the grass-roots conservatives — and I like to think of us as the kids who grew up under Ronald Reagan and who are reflective of that part of the party — and the power elites in our own party. ... We always complain about the liberal elite establishment. There is an elite establishment in the Republican Party, and the fight is going to be between the grass-roots, traditional conservatives and these elites ... who abandoned those principles because they really like being here."

For Brulte, the answer is new leadership, not a new message.

"I think by and large the Republican Party has the right kind of philosophy that meets the needs of the greatest number of Americans," he says.

Some of the party's identity crisis is inevitable because so many of its goals have been achieved, Gerson says.

He says a number of issues that the Republican Party rode to popularity and power — tax rates, crime, welfare reform — have been "resolved in American life in a way that just drains them of power as important issues." That has left the GOP with a foreign issue set that has little to do with the reason for its growth, issues such as global warming, income stagnation, and the problems of globalization.

So, Gerson says, "it is going to take someone to come and give the Republican Party a new approach and populist message."

And that's just a preview of the internal discussion the Republican Party will begin in earnest on Nov. 5 — regardless of who wins the presidential election.