Accessibility links
Texas Banks Draw On Lessons From The S&L Crisis In the late '80s and early '90s, more than 1,000 savings and loan associations — and 1,600 banks — closed; the largest number was in Texas. But today, many Texas banks are holding strong — because they learned the hard way.

Listen
Texas Banks Draw On Lessons From The S&L Crisis

Pat Hickman, CEO of the Happy State Bank in Happy, Texas, says the reckless loan practices of 20 years ago has made him a more conservative — and better — banker today. John Burnett/NPR hide caption 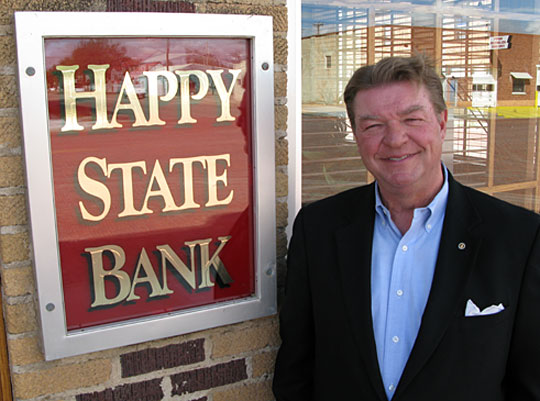 Pat Hickman, CEO of the Happy State Bank in Happy, Texas, says the reckless loan practices of 20 years ago has made him a more conservative — and better — banker today.

In one part of the country, the current financial turmoil is creating a queasy deja vu.

Twenty years ago, Texas was in an economic cataclysm brought on by a surprisingly familiar set of precursors: deregulation, then haphazard regulation, followed by imprudent loans, financial collapse and, finally, bailout.

At the time, it was the largest failure of financial institutions since the Great Depression.

The rest of the country will recall that Texas and the surrounding oil states were thrown into a depression by a perfect storm of plunging oil prices, inflated real estate, high interest rates, tax reforms, a vacuum of oversight, and lots and lots of bad loans.

The spectacular collapse of the S&L industry ended up costing the U.S. government more than $150 billion.

But today, the survivors are healthier because of it.

Pat Hickman, president and CEO of Happy State Bank, strode into the namesake branch in the town of Happy, Texas, in the panhandle, with the motto: "The town without a frown."

"Gosh, things are good," Hickman says. "We made $5 million all of last year; we've made that through eight months this year. It's going to be a great year."

But Texas bankers say their institutions are strong today, in part, because they avoided the subprime mortgages that have caused so much havoc elsewhere. Hickman says he saw this train wreck coming. In recent years, loan applications were coming his way that he couldn't believe. He turned them down when people tried to lie about how much they make.

Two decades ago, Texas banks and S&Ls made their share of irresponsible loans. Jim Gardner was president of a large bank in Dallas that eventually went under, and he remembers how fast and loose it was in those days.

"I can think of a bank in Midland where on energy loans, if it was $2 million or less, they didn't even take a mortgage because it wasn't worth it to go to that much trouble," Gardner says. "Just make it unsecured."

Back then, the federal government decided to let the ailing institutions die, though depositors' accounts were insured.

"I find it interesting and — candidly — a bit offensive that I don't recall anyone rushing to fix the Texas problem, which apparently was caused by not only our greed, but our stupidity," Spurlock says. "But apparently, it's catching."

And in the wake of most great, national screw-ups, enter the G-men — or government men.

"As I tell everyone: When my area is hot, it's bad for the world," says William Black, a former federal bank regulator, who helped close more than 300 S&Ls. He later wrote the book The Best Way to Rob A Bank Is to Own One.

As Black watched the grim headlines about Wall Street finance houses going bust, he thought how preventable it all was.

"It is the failure to learn the appropriate lessons out of the S&L crisis — the failure to put in place regulations," Black says. "When you de facto deregulate, you decriminalize. The regulators in the financial sphere are cops on beat. If you take us off the beat, there is no one to stop the elite white collar criminals."

The Poster Boy For S&Ls

One of the men Black is talking about is Tom Gaubert, who became, by his own reckoning, the poster boy for Texas S&Ls.

"They can put you in jail, they can destroy you if you let them. But if you've got good work ethic and you're smart people and you're willing to work hard, the world doesn't end," Gaubert says.

Gaubert continues to profess his innocence to all charges and blames the regulators for driving his S&L into ruin.

Today at 68, the white-bearded grandfather is back in the real-estate development business in Dallas, and thinking a lot lately about lessons not learned.

"What's happening in the country today is exactly what happened in Texas," Gaubert says.

In the wake of the Texas financial catastrophe, there was plenty of blame to go around: To congressmen, who coddled wealthy S&L campaign donors; to the federal government, for creating policies that allowed thrifts to gamble wildly; to accounting firms, which gave their blessings to sick institutions; and to the S&L con artists themselves — about 1,000 of whom were convicted.

Tom Gaubert says there were many villains, and he considers himself a scapegoat. Now, a new cast of characters is about to take the fall.

"I'm fearful," Gaubert says. "I see now the FBI marching into Lehman Brothers and marching into here. Because the government's going to spend billions of dollars to put the blame someplace else so that they're not going to be blamed for poor policy and poor regulation."

Says Henry Billingsley, a Dallas developer who survived the Texas calamity, "We've seen this movie before. It seems to be the same every time."