Accessibility links
Is The World Ready For A New Bretton Woods? In 1944, meetings at a New Hampshire resort produced the Bretton Woods Agreement, creating the World Bank and International Monetary Fund and shaping global monetary policy for decades. That history may loom over a coming economic summit of world leaders. But is there any comparison?

Is The World Ready For A New Bretton Woods?

Is The World Ready For A New Bretton Woods? 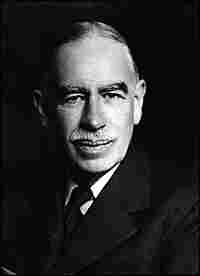 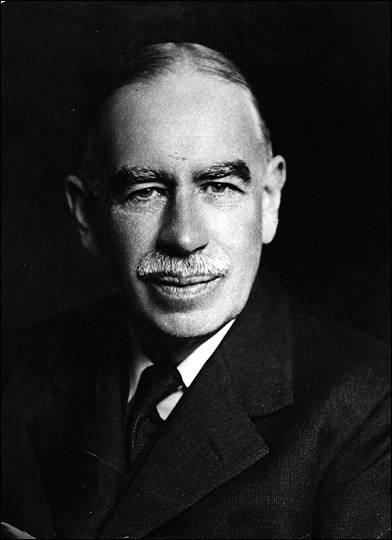 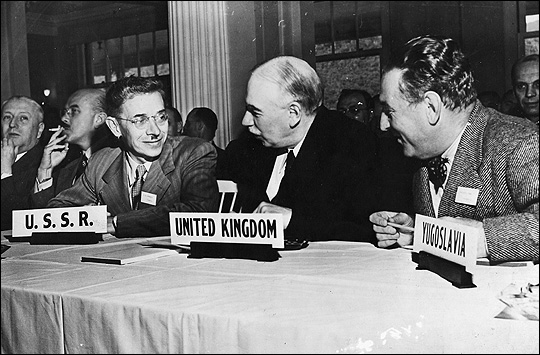 Keynes, center, talks with representatives of the Soviet Union and Yugoslavia during the Bretton Woods conference.

It was the summer of 1944, still a year before the end of World War II. The Allies had gained a foothold against the Nazis in France and were advancing against the Japanese in the Pacific. But far from the battlefields of Europe and Asia, representatives of 44 nations gathered in an idyllic northern New Hampshire resort to reshape the global economy.

Bretton Woods (officially known as the United Nations Monetary and Financial Conference) is little remembered outside university economics classes, overshadowed in history by the cataclysmic events of the time.

Now world leaders — dismayed by the current chaos in financial markets — are calling for a sequel of sorts.

But economists and historians are quick to point out that a Bretton Woods-style solution is unlikely in the current environment. In 1944, the economic road ahead seemed clear. The resolution of the current global crisis, by contrast, seems to elicit little consensus.

And while European leaders are calling for a massive rethinking of how the global economy functions, it's less clear that U.S. authorities are interested in comprehensive change.

What Happened At Bretton Woods?

By early 1942, renowned British economist John Maynard Keynes and Assistant U.S. Secretary of State Harry Dexter White had independently drafted plans that would lay the foundation for the conference. Although the two were largely in concert, they disagreed on many of the details.

They shared the belief that an international organization should act as a lender of last resort to assist nations that were having short-term problems with "balance of payment" deficits. These deficits, caused largely because some nations had more imports than exports, were blamed for slowing economic growth and spurring inflation among many of the world's economies.

No More 'Go It Alone'

Keynes and White brought to Bretton Woods an understanding that global finance was too big and too complex for each nation to "go it alone" on economic decision making.

"They believed we cannot have a stable international financial architecture without a will for cooperation," says Benjamin Cohen, a political science professor at the University of California, Santa Barbara.

"Keynes wanted a world central bank that would be capable of creating money out of thin air in the same way that national central banks can do," says Cohen, who is author of the book International Political Economy: An Intellectual History.

Keynes and White agreed on the necessity to head off protectionist policies that worked to isolate the United States from other nations before the war. They believed that high tariffs on imported goods — meant to protect American jobs — had deepened the severity of the depression. They also hoped to use the promise of a new post-war economic order to strengthen the anti-Axis alliance.

"We needed to assure [the Allies] that we wouldn't return to the 'beggar thy neighbor' financial and monetary chaos of the 1930s," says David Andrews, a professor at Scripps College, whose latest book is Orderly Change: International Monetary Relations since Bretton Woods.

White and Keynes envisioned a post-war restarting of international financial markets that had virtually ceased to function during the Great Depression and World War II.

Their plan was "audacious," says Andrews.

At Bretton Woods, nations agreed to adopt a monetary policy that tied currency exchange to gold reserves, a return to the gold standard that had prevailed before the depression.

The British, facing massive deficit spending to rebuild their shattered homeland, objected to a fixed rate, anticipating a need to devalue the pound.

But the conference participants ultimately agreed that currencies would be permitted to fluctuate within a few percentage points of a fixed rate, pegged to the U.S. dollar, which was backed by America's gold reserves.

Keynes' vision of a world central bank became the International Monetary Fund, to be funded by member nations. The forerunner of the World Bank, an institution that today provides loans to developing nations for reconstruction and infrastructure projects, was also created.

"The U.S. was supposed to keep inflation down. Until about 1965, it did just that," says Michael Bordo, an economics professor at Rutgers University. "But around 1965, inflation took off."

By 1971, the rising cost of the Vietnam War, coupled with President Johnson's Great Society programs, had increased inflation and forced President Nixon to effectively rescind the U.S. gold standard and allow the dollar to float freely.

Why A Bretton Woods II?

In that sense, a key tenet of Bretton Woods — the effort at a fixed exchange rate — was a failure. So why have French President Nicolas Sarkozy, European Central Bank President Jean-Claude Trichet and others called for a "new" Bretton Woods?

"There's a broad sense on the part of the Europeans that the international monetary, financial and trade institutions are stuck — that they haven't worked properly for some time and in a sense they see this crisis then as an opportunity to address a long-standing set of concerns about how the international economy ought to function," says Andrews.

But today, there is no international consensus on which direction to move and considering the timing of a mid-November summit — scheduled days after the U.S. presidential election — there is unlikely to be enough political will to move ahead quickly.

Without the serious groundwork laid by a Keynes and White, "I can't imagine there would be any real result in terms of reform of the system," says Cohen.

Since Bretton Woods, the world has been transformed again.

The United States remains a major force in the world economy, but it also has major competition. China and Europe have become economically much more important since Bretton Woods, while the "rise of the rest" makes the emerging economies of Southeast Asia and Eastern Europe bigger players.

Then there's Russia. In 1944, White managed to get a reluctant communist Soviet Union to attend the conference, only to see Moscow subsequently refuse to join the IMF or ratify the agreement. Today, Russia has emerged as a major exporter of oil and other commodities and would undoubtedly take a much more prominent seat at the table.

Cohen says the fact that the U.S. is less powerful than it was at Bretton Woods "makes consensus far more difficult."

"The likelihood is that the United States will seek only minimal changes to the status quo, in part because it doesn't know what kind of changes it wants," Andrews says.

In short, Andrews expects "nothing on the order of Bretton Woods" to emerge from November's summit.