Accessibility links
Shticky Stuff: 'Zack And Miri' And A Fluid Or Two Lively, naughty and crude, it's exactly the film you'd expect from Kevin Smith. Maybe too much so: The director's sentimental passions (and his frat-boy urges) have congealed into shtick.

Shticky Stuff: 'Zack And Miri' And A Fluid Or Two

Shticky Stuff: 'Zack And Miri' And A Fluid Or Two 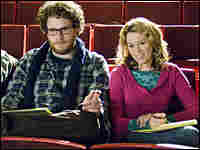 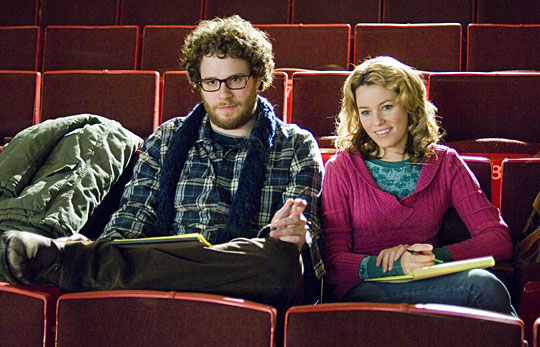 'That's Not The Idea I Was Looking For' 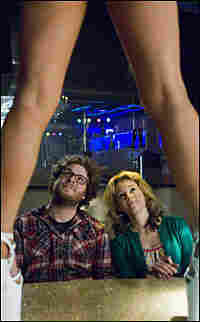 Ready for your close-up?: Zack and Miri promise to not let sex get in the way of their friendship, but, predictably, the two end up more intimate than they had imagined. The Weinstein Company hide caption 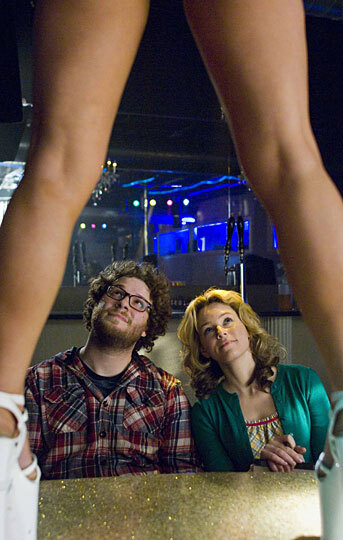 Ready for your close-up?: Zack and Miri promise to not let sex get in the way of their friendship, but, predictably, the two end up more intimate than they had imagined.

Like some misbegotten offspring of Nora Ephron and Larry Flynt, writer-director Kevin Smith is possessed by one overpowering insight: All When Harry Met Sally really lacked was a few anal-sex jokes.

If the title seems self-explanatory, it doesn't reveal just how far the director will go to elicit a shocked guffaw with this farce, which was very nearly rated NC-17.

The news is humiliating for Miri, but great fun for Zack, who's clearly the director's alter ego. Zack gets to discuss gay sex — a Smith fixation — with Brandon. And when the penniless roommates' utilities are shut off, Brandon's career inspires Zack to propose a way to make some cash. Improbably, Miri agrees.

Amid the many complications, Zack has one overriding concern: penning a script that doesn't require Miri to have sex with anyone but him. Could this be love?

Well, duh. Most of Smith's movies pit adolescent bedroom and bathroom humor against sentimental tales of concealed longing. Like Ephron, the director believes that men and women are fundamentally incompatible, but that that ol' demon love forces them together anyway.

Once, with Jersey Girl, Smith tried to play his romanticism straight. When that flopped, he returned to his earlier formula, upping the gross-out ante with Clerks 2 (which featured off-screen bestiality) and now Zack and Miri, whose major outrage is of the scatological sort — and shown on-screen).

Crudity aside, what separates Zack and Miri from Smith's smarter films is that the director's themes have congealed into shtick. In Clerks, Chasing Amy and even Dogma — well, in its first half — Smith seemed to be working out issues that were genuine and deeply felt. Now he's just churning out sequels.

Married, a father and pushing 40, Smith is no longer a trustworthy chronicler of 20-something slackers. He still can devise an impressively gamy set piece, but he's misplaced the humanity of his best work. In the spirit of Star Whores, his latest film could be retitled Clerks III: Attack of the Cloner.