Accessibility links
Study Traces Frog Population Decline To Weed Killer All over the world, frog populations are declining because of diseases and the destruction of wetlands. A new study suggests another reason: a cascade of environmental changes set off by farmers who spray crops with the weed killer atrazine.

Farmers' use of the herbicide atrazine has set off an ecological chain reaction afflicting frogs, including the leopard frog, a new study suggests. Neal Halstead/University of South Florida hide caption 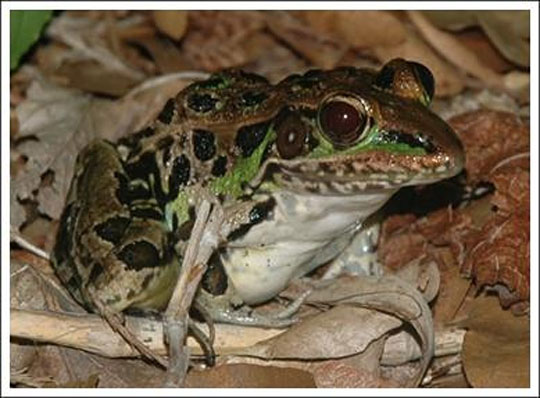 Farmers' use of the herbicide atrazine has set off an ecological chain reaction afflicting frogs, including the leopard frog, a new study suggests.

All over the world, frog populations are declining because of diseases and the destruction of wetlands. A new study suggests another reason for the drop: a cascade of environmental changes set off by farmers who spray crops with the weed killer atrazine.

Farmers have been using atrazine for 50 years; it's cheap and not very toxic to humans. But it's controversial because it stays in the environment for years.

Several years ago, scientists at the University of California, Berkeley, reported that incredibly small amounts of atrazine kept frogs from reproducing. The Environmental Protection Agency commissioned one of the biggest studies in its history, but David Skelly, an ecologist at Yale University, says it didn't show the same damage to frogs.

"And so far, the lack of someone else being able to reproduce these results has left this in limbo," Skelly says.

So farmers continue to spray tens of millions of pounds of atrazine, mostly on corn fields, every year.

Now some scientists are saying atrazine residue may hurt frogs in a different way.

There are little flatworms called larval trematodes that infect frogs. The scientists studied 18 ponds and wetlands in Minnesota, trying to find out why some ponds had lots of these worms and others didn't.

Jason Rohr, a biology professor at the University of South Florida in Tampa, says the one thing that seemed to explain the difference best was the level of atrazine.

"The more atrazine that we had in ponds, the greater the abundance of the larval trematodes," Rohr says.

But why would atrazine lead to more flatworms? Rohr designed another experiment, using 300-gallon outdoor tanks stocked with members of a typical aquatic community. It included snails and amphibians such as frogs.

Some of the tanks were dosed with a bit of atrazine. It turned out the chemical set off an ecological chain reaction — it killed algae floating in the water. But algae attached to the bottom of the tank survived. In fact, those algae prospered, because they were getting more sunlight.

"There was more food for the snails and, as a result, there were many more snails in those tanks," Rohr says.

Rohr and his colleagues noticed something else. In the tanks with atrazine, the number of frogs infected with parasites jumped even more drastically than they expected based on the increasing snail population. Rohr says this hints that atrazine may also damage the frogs' immune system so they can't fight off the parasites.

Experts on amphibians, such as Andrew Blaustein of Oregon State University, say the combination of atrazine and flatworms "isn't as big a deal as habitat destruction or some of the main diseases ... but it can do some damage."

Skelly says government regulators don't usually look at the damage resulting from indirect ecological effects. "They just haven't been part of the paradigm for how we decide what the effects of pesticides are going to be on the environment," he says.

The EPA got chemical companies to spend millions of dollars testing for direct, toxic effects of atrazine. But it never demanded studies of its effects on the food chain that links frogs with algae, snails and flatworm parasites.